We’re going to now be going out and meeting the farmers that produce our food. I want to try and feature a farmer once a month that raises and grows our food in a way that sustainable and that we feel are doing what’s truly right. This first one is extra special to us. 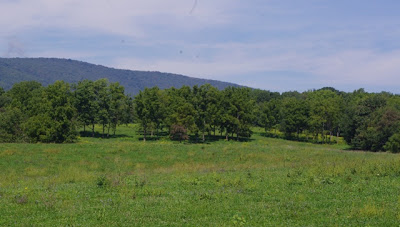 Standing in the pasture I look around at the incredible biodiversity. It’s hard to believe that this rich environment was more rock than pasture and woodland just 40 years ago. What amazes me further is that I’m standing next to a 10’x12′ chicken tractor packed with 75 broilers and all I can smell is grass.
“…farming should be aromatically, sensually, and romatically pleasing….” says the farmer talking to a group of about 50 of us. He’s wearing his signature cowboy hat that looks like a herd of cattle had trampled it and thick rimmed glasses. 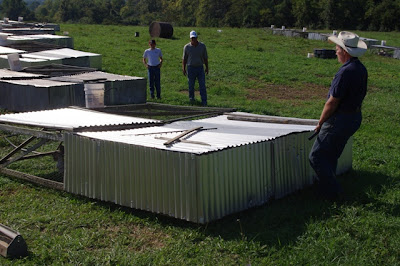 We all rode into the chicken pasture on a hay wagon pulled by a tractor. Over a dozen of these chicken tractors are spaced out evenly across the pasture and none of them smell. A couple of the chickens in the tractor next to me cock their heads and look at me inquisitively then go about trimming the grass next to them. These are happy chickens. The farmer shows us how to move one of these tractors. One person can move one tractor in less than a minute. 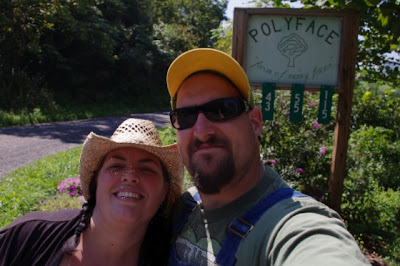 We’re standing in one of the pastures at Polyface Farms outside of Swoope, Virginia. The farmer taking us on the “Lunatic Tour” is none other than Joel Salatin. The same Joel Salatin that has been featured in The Omnivore’s Dilemma , and in documentaries including Food, Inc., Farmegeddon, Fresh: The Movie, and the upcoming American Meat. Ever since we saw Food, Inc. we’ve been wanting to not only meet him but to also visit his farm and when we got the chance we jumped at it. Last January we got the chance to meet him briefly when he gave a speech in Berkeley. It was a great speech but being there, being on his farm while listening to him wax poetic made it all that much better. 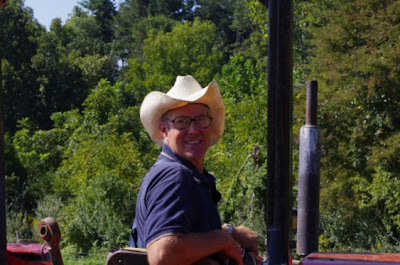 Joel is charming, funny, extremely happy and incredibly nice. You can tell that he is truly in love with what he does, and that is the most inspiring part. He says every day he wakes up he’s happy because he knows how many animals are happy because of him. He discusses an ex-CAFO pork farmer who gave it all up when he realized he was tired of waking up every morning dreading that day’s emergency.

While standing next to the broilers he discusses the problems he’s had recently with animal rights activists. Of all the farmers out there, Joel is the last person I would accuse of committing animal cruelty, but apparently cows waiting to make their daily move to new pasture amounts to Joel having to take two days out of his extremely busy schedule to fill out paperwork and take State and Federal veterinarians around his farm to explain his farming operation. 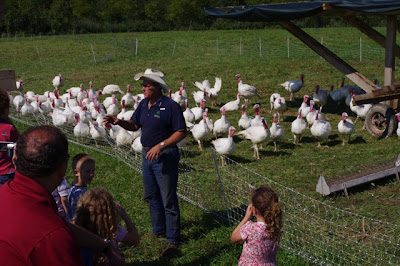 After the chickens we move on up the hill to the turkeys. We don’t spend much time with them due to the sheer noise. They are clearly excited to see us and their calls drown out Joel. It was great to see them though. 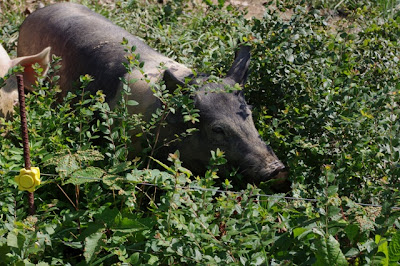 The pigs were my favorite. There’s one sow that’s collecting sticks and leaves and carrying it into a corner of their pasture that’s out of view. Others come up to the fence to greet us. Some of the kids got to pet a few of them through the wood access gate. Here’s a short video I took of him discussing pasture rotation.

The cattle, about 150 animals, were mostly under the shade structure as the day was beginning to heat up. Some are still grazing, but most of the pasture they’re confined in is already well mowed. Around 4pm they would be moved to the next section of pasture. Moving them in the afternoon allows them to graze comfortably as the day cools down and it avoids having them feed on dew covered pasture which can disrupt their rumens. The grazing is based off of the three Ms. Moving – they have a controlled move across the greater pasture. Mobbing – by having a higher number of cattle, they don’t just eat the tastiest plants, but everything so that they have a more varied diet meaning they get more nutrition. Mowing – by grazing, they actually rejuvenate the pasture, keeping it healthy and also building soil. 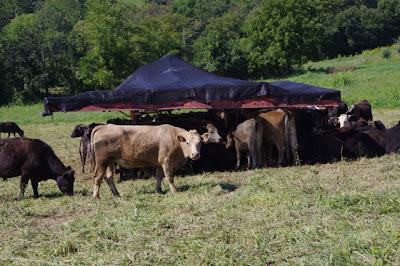 We moved back across the pasture past the Eggmobile which houses laying hens that clean up after the cattle. They go through the field eating fly larvae and other parasites, which help keep everyone healthy. Most of these hens were Rhode Island Reds, Black Austrolorps and a couple of Barred Rocks. We don’t stop at them as time is running short and we need to go visit the Millenium Feathernet. A scissor-truss structure with an electrified net fence that is moved daily, houses 1,000 Barred Rock laying hens. Joel steps on the net fence holding it down and the kids going running in. Chicken chasing ensues and a few lucky kids were able to hold a chicken they had caught. 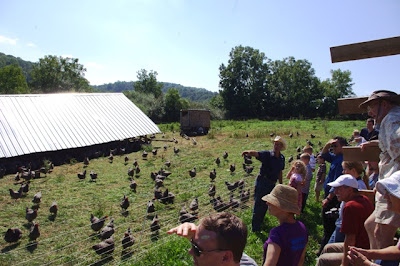 Joel considers his farm “beyond organic.” He’s not certified organic because he can’t source local, organic supplemental feed. His reason behind this makes more environmental sense. Instead of shipping in organic food from far away he feels it’s much more important to purchase local non-GMO feed ingredients (they mix their own), from his surrounding neighbors. This keeps them in business making them less likely to sell their land to developers, and thus preserving they gorgeous Shenandoah Valley.

The biggest question that the anti-sustainable crowd has is whether this system can feed the world and still be profitable. While Joel’s neighbors earn around $300/acre he earns 10 times that with his system. He also explains the concept of “cow/days.” The Shenandoah Valley averages 80 cow/days which means an acre can support 80 cows for one day or one cow for 80 days. Joel’s system, however, has resulted in 400 cow/days, increasing the efficiency of his pasture by 5 times. Then the hens move in, thus increasing the pasture’s value even more. Polyface will pass $1M in sales this year. 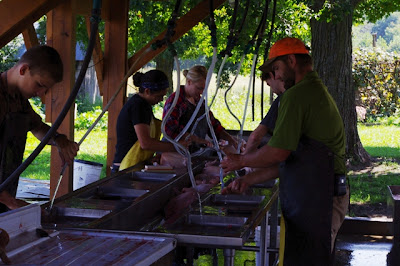 After the tour we went into their farm store to purchase some beef and chicken. That’s when I realized that it wasn’t just efficient and profitable but it was affordable. His pastured chickens were $3.25/lb. The top round was $7.00/lb. Both prices were incredibly respectable and unlike what I usually see for pastured meat, which is usually twice that if not more, it didn’t make me flinch. Sure it wasn’t the $0.99/lb that most grocery stores pawn off Tyson chickens at, but these chickens from Polyface Farms aren’t subsidized by my tax dollars and I know that every cent I spent on that chicken went to the farmer. I know they were healthier and happier animals and I also know that in the grand scheme of things, artificially dirt cheap meat just isn’t sustainable and that I’m paying more for it with my health and with my tax dollars. 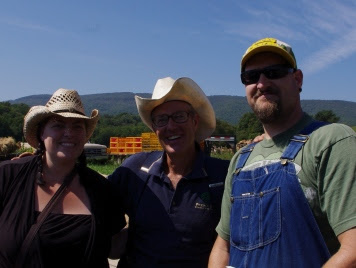 This is how farming should be. This is how we can remain sustainable while feeding the world. I left feeling incredibly inspired and with a feeling that this single tour will end up being extremely influential in my life.

He has a new book coming out on October 10th called Folks This Ain’t Normal. I’ll definitely be pre-ordering it!

7 thoughts on “Meet Your Farmer – How Farming Should Be”