We’re doing plant starts again this year – peppers, tomatoes and eggplants. We will also be doing artichoke plants again and hopefully be including herbs. Last year we sold out within 3 weeks so I wanted to give you all a chance to pre-order them so you can get the varieties you want. We will also be increasing our production along with adding more varieties. If you want specific varieties please let me know (contact us with the form at the end) and I will make sure I have plants set aside for you. They are $3.50 each or 3 for $10. They will be available for planting around mid March. We will also hopefully be selling them again at Moschetti’s as well as a possible second location (stay tuned).

Caspar – I adore this eggplant. It’s a long Japanese style eggplant with white skin and very creamy white flesh. If you aren’t a huge fan of eggplant (like myself), this is definitely one to try. It may just make you a convert. 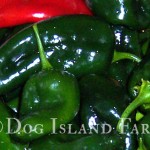 Ancho Gigantea (Poblano) – Relatively mild, productive pepper that is great dried or roasted. This is the standard pepper for stuffing. Green peppers are called Poblanos and red peppers are Anchos. 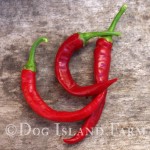 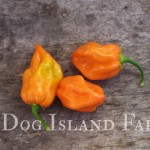 Pimiento de Padron  – We grew these last year and they started out delicious but as summer rolled on they became increasingly hot. This year we’re trying a different seed vendor. They are usually a mild, small Spanish pepper that is traditionally fried. Sometimes you’ll get a hot one. They are fantastic stuffed with a bit of goat cheese before frying. 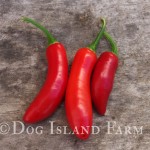 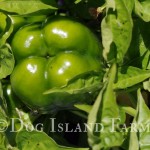 Canary Bell – We haven’t tried a yellow bell yet, so we decided to go with this one. It is highly productive, sets early and continues all through summer and is also resistant to Tobacco Mosaic Virus.

Amish Paste – Of the many paste tomatoes we tasted, this one was far and away, the best tasting. I look forward to trying the concentrated flavor of these when canning. Nice sized red Roma type tomatoes that are good for both canning and fresh eating (something you can’t say about most paste tomatoes).

Aunt Gertie’s Gold – One of the all-around best tasting tomatoes available. A golden yellow tomato that can grow to nearly a pound provides a sweet, fruity and complex flavor.

Aunt Lucy’s Italian Paste – Abundant producer of 2″ round red paste tomatoes with few seeds. From Italy, this is a very rare tomato variety, but should earn a place at anyone’s table. Classic sweet, tart flavor that is expected of old Italian heirloom tomatoes.

Black Krim – One of our most popular varieties. A purple-black beefsteak with a hearty, rich flavor. Fruits get darker when exposed to sunlight. Productive.

Blush – Elongated cherry tomatoes, they start out a striped yellow and ripen with a pink blush to them. Productive plants give you sweet, fruity and refreshing fruit that you won’t be able to stop eating right off the vine.

Carmello – This red French variety (we have are offering an open pollinated strain) is thought to be one of the most productive varieties available, this tomatoes pumps out juicy fruits that have exceptional balanced flavor. Shows disease resistance. 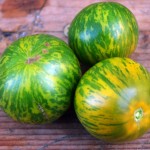 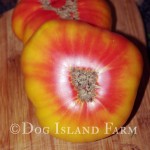 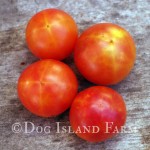 Isis Candy – Orange cherry tomato with red starburst. Very productive of small sweet, fruity tomatoes that you can just pop in your mouth. 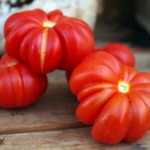 Sioux – We grew this small rather unassuming red tomato last year only because we got a packet of free seeds. At our tomato tasting we were surprised that it outperformed all of the other tomatoes and was hands down the favorite out of 16 varieties. Sweet, tangy, rich and complex, you won’t regret making space for this variety. 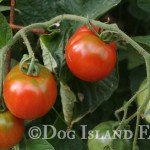 Stupice – This very early tomato blew me away this year with it’s productiveness. Small tomatoes, but not quite cherry size are born as early as late June and continues through until the frost. Sweet and flavorful. 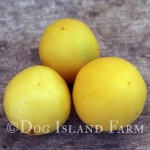 6 thoughts on “Tomato, Pepper and Eggplant Varieties for 2015”