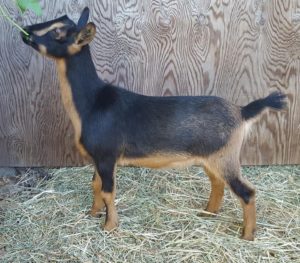 When Skylla freshened with this incredibly productive, well attached, high udder I knew I had to keep a kid from her. I already felt she was our nicest homebred doe so when the udder developed there was no question that she was our nicest doe. I’m hoping Kelpie (named after the malefic water horse of Scottish myth, not the dog breed) lives up to her dam’s reputation.

Kelpie is lightly linebred on SG Castle Rock Cleveland Sage +B *B *S. I knew when she hit the ground that I wanted to keep her. Then I went through a phase where I was going to sell her just to keep our numbers down but every time someone inquired about her I would talk them out of it. I just couldn’t sell her, so now she stays. She’s level and uphill, angular with well-sprung ribs. She’s got tons of width between the hocks with a high, wide escutcheon, just like her dam.