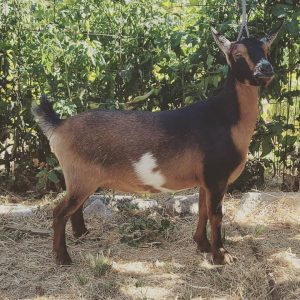 Shown as a dry yearling

I said that I would keep breeding Kahlua to Graupel until I got a doeling from the pair. I didn’t have to wait long because with Kahlua’s first freshening she gave me buck/doe twins. We now have genetics from the two highest appraising does in the Castle Rock herd – SGCH-ARMCH AGS CRF Castle Rock Alum Root 1*M 3*D VEEE 91 and SGCH CRF Castle Rock Blizzard 1*M 3*D VEEE 91. 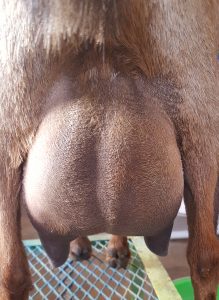 I didn’t think it was possible, but Millie is even more feminine than Kahlua was as a kid. She’s naturally uphill, very long (earning an E in back) and level with good angularity and stretchiness and earned a V in General Appearance for her first freshening. She’s a bit more standoffish than her dam but she still likes to get into your lap for a snuggle. I’m super excited about her after seeing what her dam’s first freshening udder looks like and the genetics behind her sire. Her paternal half sister, Castle Rock Fedora, freshened with a very high, capacious udder and I hope that Graupel passed that on to Millie as well. Like her dam, her first freshening was a bit lack luster but being from the same slow maturing line I expect her next freshening to be a lot nicer.

Unfortunately Millie ended up having subclinical mastitis during her linear appraisal making her udder uneven. I didn’t find it until a few days after the appraisal. I’m hoping her 2nd freshening receives a better score for mammary.