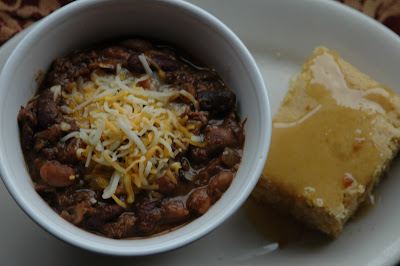 I have never made chili.
Well, I take that back. I have -now-. But before last week, I had never made chili. I’d eaten a lot of chili, sure – who hasn’t? And every time I tasted a chili that I particularly liked, I’d ask the person who made it what makes their recipe special. Then I’d go home and promptly forget that I ever planned on making a pot of my own. Every time.
Maybe this is because I grew up eating (and later cooking my own) habichuelas, a traditional Puerto Rican dish that is very much like chili. Perhaps I was filling the same niche in my food paradigm? 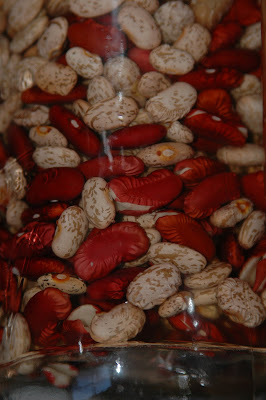 In my quest to use up more of the massive pile of stew and scrap meat in our freezer in interesting (and elevating) ways, I had thought about making some sort of slow-cooked meat dish (like a pulled pork or a hearty stew).While I still intend to do that, one thing made me change my mind:
We fixed the fireplace. Yup, now I can have fire inside my house without it being a bad thing. I took one look at those glowing embers the first night we lit it up, and I knew they were just calling out for a dutch oven to be set in them (I also vowed to track down a good fire-safe kettle for tea making)! And I don’t know about you, but when I think cast iron dutch oven, I think chili.
So there I was: I’d decided to finally try my hand at making my own chili. I recalled all those bits of advice over the years, thought about what I know about cooking times for grass-fed beef and dry beans (both notoriously easy to screw up if you’re not careful), donned my ridiculous cowboy hat, and got to work. 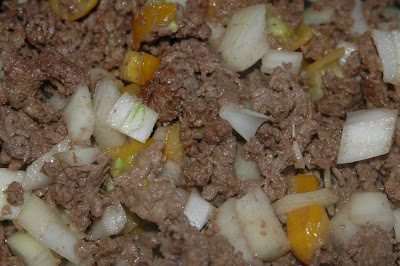 OK, so I only wore the hat for a minute. But later that day, the house was filled with the deep, spicy smell of meat and beans and cornbread, and I’ll be durned if’n I didn’t feel a *little* like a successful cowgirl.
Next time I will actually cook this in the fireplace (once we have a stable method of keeping the dutch oven upright and at a decent distance from the flames). At least now I know that I have a recipe that will produce a thick, rich chili with just the right amount of sweet and spice…what a great excuse for staying home and tending the fire all day! 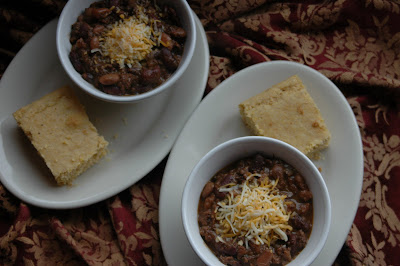 Hearty Winter Chili and Cornbread:
for the chili:
2 lbs ground beef (I used stew meat that I pulsed in the food processor as shown here)
2 c dry beans (I used a mixture of kidney and pinto)
1 large yellow onion, diced
1 can/jar of stewed tomatoes ( I stew my own heirlooms, but any would be fine. About 1-2 cups)
4 c beef or vegetable stock
2 Tbsp olive oil or rendered fat (I used duck fat, but bacon fat would be OK too)
1/4 c blackstrap molasses (you can use brown sugar here f you’d rather)
1 bottle of beer (I used a fairly light-tasting Mexican beer)
1 tsp mustard powder
1 bay leaf
1 tsp paprika (I use organic smoked paprika, which is a deeper, smoky flavor)
1/2 tsp cayenne (or more, if you like it hot)
salt and pepper to taste
for the cornbread:
1 c whole wheat flour (I’ve used both bread flour and pastry flour successfully)
1 c coarse corn meal
up to 1 c milk
1/3 c oil (I use sunflower oil)
1 large egg
1 Tbsp baking powder
2 Tbsp sugar
1 tsp salt
Planning ahead: you’ll need to soak the beans for at least a couple of hours before you put them into the chili. I have a half gallon mason jar that I use for this, so that I can put the lid on and shake the beans around a few times (so they don’t expand and get stuck in the jar, or get any dust or other food bits into them while soaking). Pour in a couple of cups of picked-through beans (no rocks in this chili, thanks), and fill nearly to the top with hot water. Put the lid on loosely at first so steam can escape, than tighten it down once it has cooled a bit. Soak these for a good several hours, or up to overnight.
To make the chili: melt the grease (2 Tbsp oil or fat) and brown the ground meat in a large cast iron dutch oven or other suitably heavy, deep pan with a lid. Add onions and cook until barely translucent. 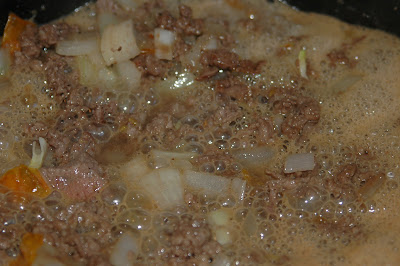 Pour in the beer and allow it to foam up, then stir it down, adding the stewed tomatoes (if using fresh tomatoes, dice them and add them in with the onions in the previous step so they can break down a little). Toss in one bay leaf (I use local CA bay laurel which is much more pungent than the dried bay you can buy at the store – once I feel the leaf has given enough flavor/aroma to the chili, I pull it out and discard it) and the dry spices. Allow this to simmer over low heat for about an hour, adding more stock when the moisture level is low.
Next step is to add in the beans and the molasses. I strained the water out of the beans before adding them, but I suppose you could add the soaking water and cut back on the stock a bit. Add stock to cover all the solids by about an inch and set it back on the stove to simmer for at least another hour (preferably two or three), until beans are soft and the stock has reduced down. Depending on how long this takes and how low you’ve set your burner, you may have to add more stock to keep the chili from drying out. 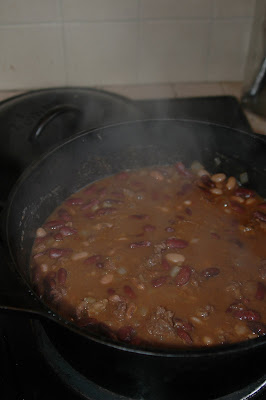 Cornbread: yeah, this is everyone’s cornbread recipe. It’s pretty hard to beat considering that you can leave out the egg or the oil and still have something fairly tasty on your hands. It’s a perfect baseline. If you want to spice it up a bit, throw in some cooked corn, some cheddar cheese, some cooked and chopped spinach, or some diced tomatoes (using less milk if you add wet ingredients). It’s also fabulous made with yogurt in place of some of the milk. If you have the ability and interest, grind your own corn for the meal!
About a half hour before it’s time to eat, mix all the cornbread ingredients in a bowl to make a thick batter, reserving some of the milk if it seems too thin (this will depend on the type of flour you’re using). Pour the batter into a greased cake pan and bake at 400 degrees for about 20 minutes or until it is golden and puffy, and a toothpick inserted into the center comes out clean. DO NOT OVER-BAKE THIS or it will become terribly dry. Allow the bread to cool for at least 10 minutes before serving.
I like to serve this cornbread cut in squares with a drizzle of honey butter (I heat the honey in the microwave for about 20 seconds, then melt a cold pat of butter into it). I like more honey than butter in my mix, but you can make yours however you like!
With a heaping bowl of the fresh slow-cooked chili (add a sprinkle of cheese if you’re into that sort of thing), this cornbread is the perfect thing on a cold or rainy day, especially eaten on the hearth of your very own fireplace. 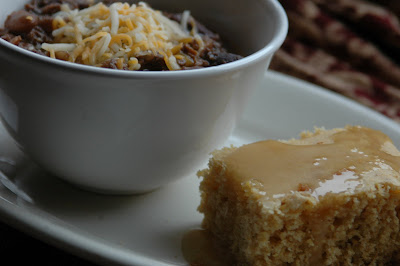