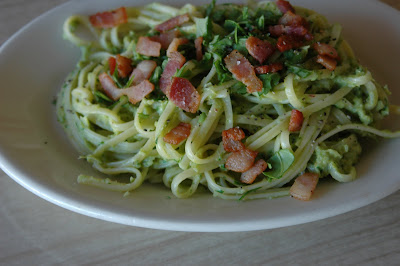 Sometimes you don’t know you’re looking for something until you find it.
Sometimes you’re just minding your own (or everybody else’s) business mindlessly surfing through facebook when a friend of yours posts a recipe to another friend of yours saying “we need to make this” and you can’t not look, because hey, it’s food and both of those friends know good food when they see it (or read about it) and all of a sudden your dinner plans have DRASTICALLY CHANGED. And also you feel a little like you just stuck your nose in something that was not for your nose. But still. Sometimes these things happen.
And sometimes that’s awesome.
A few weeks ago a friend of mine posted this recipe, and I was immediately smitten. The flavors reminded me a lot of an eggs en cocotte recipe (served over sauteed asparagus, leeks and bacon) that I have always loved, and the method (similar to a pasta a la carbonara) was something I had been meaning to try for a while.
So this weekend I picked up leeks at the farmer’s market. And, because I have a massive aversion to parsley in most dishes (mostly, everything but these), I picked up some arugula. I figured heck, why not? The recipe called for a lot of cracked pepper, so maybe the green tanginess and spiciness of arugula would be just the thing to kick up the mild softness of the leeks and garlic. 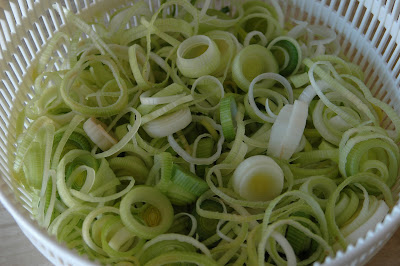 When I’m right, I’m right.
…also, usually kind of smug. But it’s OK to be smug about good food choices.
The pasta was PERFECT with this sauce. The sweet, mellow flavor of the long-cooked leeks and garlic blended with the salty crispness of the bacon and the crunch of the raw arugula and the rich heartiness of the egg to make something greater than I could have imagined.
This one’s going in the recipe box, for sure. You know, after I post it on facebook.
Pasta a la Carbonara with Leeks and Arugula
(adapted from the New York Times)
8 oz of any dry pasta (I like linguini/fetuccini for this)
4 thick strips of smoky bacon, cut into pieces
3-4 medium/large leeks, sliced into thin rounds and thoroughly washed/drained
4 cloves of garlic, chopped
1 c fresh baby arugula
1 very large (or 2 small) eggs
salt and pepper, to taste
In a large skillet, brown the bacon bits until they are just starting to crisp. Remove them with a slotted spoon and toss the leeks and garlic into the pan drippings (add more bacon grease or olive oil if they start to stick). Cook the leeks slowly over low-to-medium heat until they are very soft and golden (about 30 minutes).
In another pot, bring a large amount of lightly-salted water to a boil and start your pasta cooking. You want it to be al dente right when the sauce is pureed and ready to go back in the pan.
NOTE: it is very important that the pasta be hot when the sauce is added, as the heat of the pasta and reserved cooking liquid are what cooks the eggs and makes this a safe dish to serve. Even with our fresh backyard eggs, I am very careful to thoroughly wash the shells before cracking them, and to being them to a safe temperature before eating them. 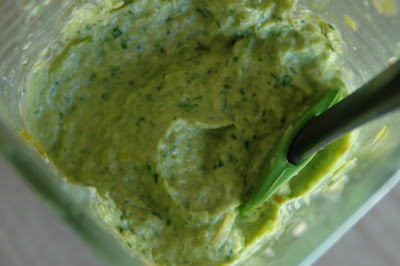 Transfer the softened leeks into a blender or a food processor (my blender does a better job of pureeing than my cuisinart) along with most of the arugula (save a little bit to chop for garnish) and the raw egg. Blend until the sauce is thick and a bit foamy. Add a tiny bit of water if the arugula won’t blend down on its own.
Transfer this puree back into the large skillet (off the heat) with about 1/4 to 1/2 cup of the pasta cooking water, and the (drained but not dry) pasta. Toss to combine, making sure the sauce thickens and the strands of pasta don’t stick together too much. 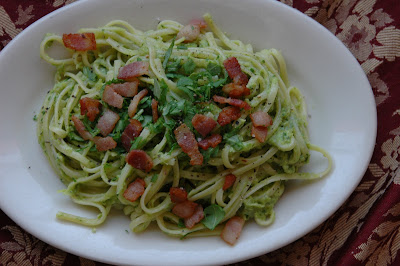 Serve this pasta on a large serving plate (or individual bowls) with a sprinkle of chopped arugula, some bacon bits, and fresh cracked pepper and salt. 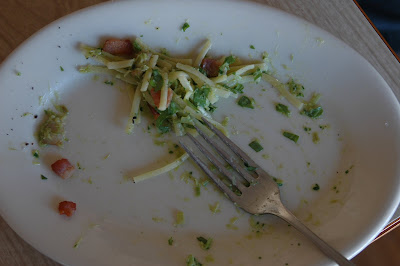