CSN Stores sent me a small dog pen to test out and review. Now I’m sure you’re thinking “What is she going to do with a small dog pen when she has two large dogs?” Well a small dog pen works just as well for other small animals that don’t have a penchant for jumping like cats.

I placed the order, just like a regular customer and found that the process was pretty painless. The cost was really reasonable. Shipping was surprisingly fast, though the shipping company banged it up a bit, causing some of the black finish to chip off on one corner. If you’ve ever seen how some companies treat packages this minor damage wouldn’t surprise you.

I’ll admit though that the package did sit in our living room for a couple of weeks before I got around to opening it. That’s kind of how it goes around here unless it’s something really important or I’m really excited about. Once I pulled the pen out of the box though, I wasn’t disappointed. It was pretty much already put together, it just unfolded into a pen of whatever shape you want it to be. I like the door feature even though it’s short enough to step over. 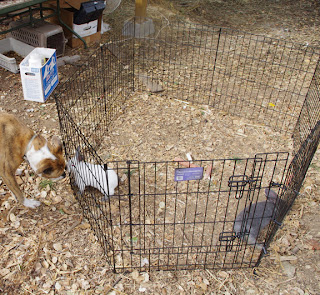 So what are we using it for? It’s our rabbit exercise pen. When the ground is dry we put our rabbits in it to play. We will generally put Lucy and her kit in it together. Ricky on his own unless we’re breeding him with Lucy. We can still put Scooter and Roly Poly in together as they get along pretty well.

The pen allows them to stretch out their legs while also keeping them (and our garden) safe. I wish we had lawn for them to play on, but I’m not going to plant one just for that. They enjoy digging and hopping around. Squeek can come by and visit without scaring them.

I do think it’s a bit small for even small dogs to spend any length of time in but it works well for rabbits. So would I recommend the pen? Yes, but if it’s for a dog I’d get the next size up.