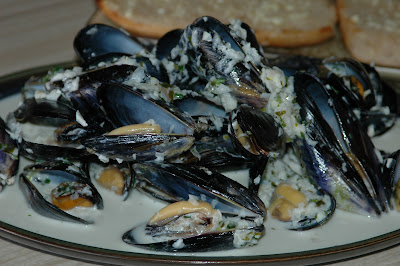 I should have called this post “Things I Thought Were Hard to Cook (But Was Wrong About)”, but then I would have had to include all of the other well-kept culinary secrets and…well…some of them are just going to have to stay secrets for a little longer.
Today, I just want to talk about mussels.
Anyone from coastal California knows mussels. They’re…the ones that aren’t barnacles. You know – the big (sharp) black shells that grow all over the rocks and cut your feet open and make it impossible to go tidepooling and sometimes the seagulls drop them from way up in the air and they hit you on the head and…
…wait, you can EAT those things?
I am here to tell you that you can (and should). If you don’t cook shellfish because it is “hard” or “scary”, you’re wrong. Try this. It is SO EASY and easily makes the best plate of mussels I have ever eaten. 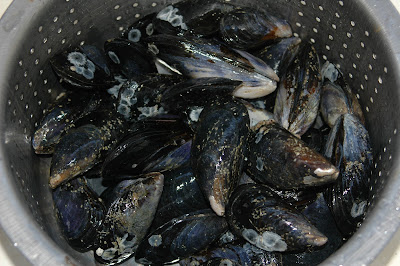 If you are harvesting the mussels yourself, please read about the safe times of year to do so (October to April, basically) and all precautions to take. Hank Shaw has a great post about wild mussels here. Please take warnings about mussels seriously, as you can get very sick (and even die) from ingesting mussels that have filtered a particular dinoflagellate present in the waters during the summer months.
Farmed mussels are strictly enforced and are safe to eat, provided your supplier is following the rules set down by the government (who track the algal blooms and only allow harvest of shellfish when it is determined to be safe).
And yes, the quality of the shellfish is very important. We have a guy who comes to our local farmer’s market who supplies us with fresh, live, healthy mussels for a totally reasonable price (also clams, and oysters, which are his specialty). 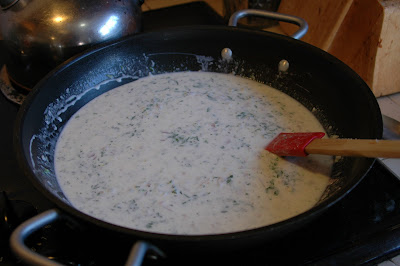 This is only kind of a recipe. It’s actually more of a method. Take 2 lbs of mussels, and make sure they are all alive (they should either be closed, or they should close pretty quickly when you poke them in the squishy-parts). If they don’t close, toss them – they’re probably dead, and a dead mussel is not a tasty (or safe to eat) thing.
The beards will need to be removed from the mussels just prior to cooking (don’t do it until you are ready to cook them, as it can kill them, and then they will go bad). To do this, start at one side of the beard and pry it out. It will be partially inside the shell and can take a bit of muscle (haha) to remove, but once you get the hang of it, the process goes pretty quickly. Once they are de-bearded, rinse them well (Rick scrubs them off with a sturdy brush/scrubber) and keep them chilled until you are ready to put them in the pan. 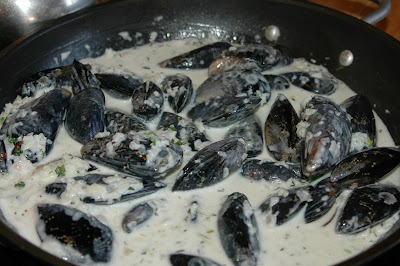 Speaking of pans, you’ll want a big stock pot or deep frying pan (I use our big paella pan) that has a tight-fitting lid. Finely dice a couple of shallots and about 4 cloves of garlic, and put them in the pan with 1/3 bottle of white wine and about a cup of heavy cream, and slowly bring this up to a light simmer. Cook for about 5 minutes, or until the garlic and shallots are tender. Chop about 1/2 c of flat-leaf parsley and toss it into the mix, with a bit of salt and pepper (you’ll adjust later to taste).
Bring the broth up to a high simmer (but not a boil) and throw in your chilled, cleaned mussels. Spread them out as best you can in the pan (it’s OK that the sauce won’t cover them) and put the lid on the pan. Steam the mussels for about 8 minutes, or until all the shells are open.
At this point, if the shells do not open, they are probably dead. You can cook them for another few minutes to see if they’ll comply, but I generally just throw them out to be on the safe side.
Taste the broth and season with salt/pepper if necessary. The opened mussels are now ready to eat! Garnish with a bit more chopped parsley, and serve over pasta or with a side of fresh garlic bread – delicious. 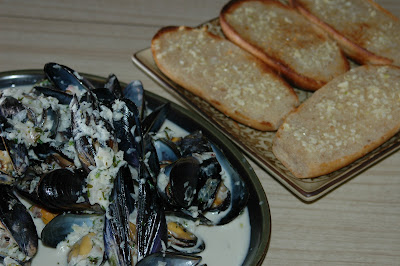 From start to finish, this process takes Rick and I less than 30 minutes. I make the sauce, he de-beards, we reconvene for steaming, and make garlic bread while the mussels cook. Easy, right? Right.
Delicious? You bet. 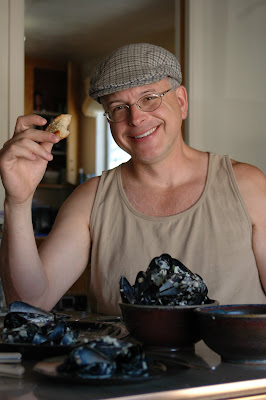 I can’t wait until the season is right to try this with wild mussels (which will require a few more steps, as they are notoriously gritty and the broth needs to be strained to remove debris). Another wild food for the pot? I’m willing to go to the trouble!