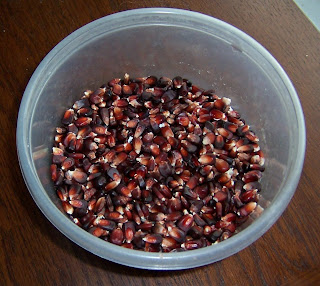 This is our fourth year growing corn. Our first year we grew the standard sweet hybrid corn. It did pretty good. The second year we decided to go with heirloom “dual purpose” corn. When young, it could be eaten right off the cob and when it was mature it was a flour corn. We ended up waiting too long to eat most of it early on so we ended up with a bunch of flour corn. The variety was called Bloody Butcher and was a beautiful deep red. We used it for fall decorations and then later on stripped the kernels from the cobs.

We ended up with a bucket full of dry corn and I had no idea what to do with it. The bag ended up getting put up in the cabinet and it was soon forgotten.
Now it’s two years later and with my desire to become more self sufficient I decided to do something with the corn. Here’s my adventures in corn tortillas.

Growing Flour, Field and Dent Corn
Corn is a heavy feeder with shallow roots. It is not self-pollinating so it must have other corn plants near it. Wind is the primary pollinator. To get a larger crop it is important to plant it in a block rather than in a straight row. We plant ours in smaller blocks of 6 plants x 6 plants each planted about a foot apart with pathways in between the blocks. 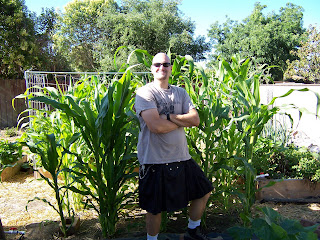 We direct seed our corn rather than plant transplants. I find that this allows the plant uninterrupted growth because there is no transplant shock. We start by digging holes about 1′ on center and fill them with a 50/50 mix of native soil and amendment. Our favorite amendment to use is Bumper Crop Organic Soil Amendment from Master Nursery. Because of their shallow roots make sure the soil is nice a loose.

Once the seedlings are up about 6″ you can plant 2-3 pole bean seeds around each corn seedling. This is a great symbiotic relationship. The beans are nitrogen fixers, which helps feed the corn and the corn makes a great trellis for the beans to climb. We choose to do dry bean varieties so we don’t have to worry about getting in an picking them until it’s time to cut the corn stalks down. If you don’t choose to plant beans with your corn, you can use a natural fertilizer, such as fish emulsion, once every two weeks.

Our biggest pest when growing corn was mealybugs that were being “farmed” by ants for their “honey dew.” The ants protect them from predators. We found this to only be a problem with our flour corn because the corn stays on the stalks for so long. The best way to keep the ants off were with Tanglefoot smeared around the base of the stalks. The ants can’t cross it without getting stuck and without the ants, the natural predators can kill the mealybugs. If you ever get Tanglefoot on your skin you can use some olive oil to help remove it and then dish soap to clean up the olive oil.

Late summer or early fall is harvest time. Gently pull the silk and the top of the husk down to check the kernels. When they are hard, it’s time to pick.

Corn Tortillas require Masa Harina Flour which is specially treated corn (Nixtamel or Hominy) using a dilute alkaline solution that has been ground into a fine flour.

There are two ways to make it. This first time I used Pickling lime (Calcium hydroxide or “cal”) to make the Nixtamel. Making it greatly increases the nutritional density of the corn by freeing up proteins and B vitamins.

What you will need:

2 lbs dry corn – dent or flour are recommended, but field corn is ok if you can’t find the firs two 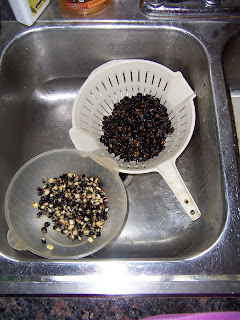 How to make it:

1. Rinse corn and remove any chaff and debris

2. In the large non-reactive pot add water and dissolve the Pickling Lime. Once dissolved add corn and bring to a rolling boil. Allow to boil, covered for 15-20 minutes and then remove from heat, let cool and put in refrigerator for 8-10 hours or overnight. The corn should now be plumped up and the skins should be falling off. Skim any loose skins off of the top of the water.

3. Strain Nixtamel in colander and rinse. Roll kernels in hands to remove excess loose skins. Our corn came out of the alkaline solution almost black, and once the skins were removed they were a rainbow of colors.

4. Rinse Nixtamel at least 2 more times. If the corn isn’t rinsed well enough it will be bitter.

The other method of making Nixtamel is by using wood ash. I will try this method for my next batch of tortillas.

1. Take 2 double handfuls of wood ash from hardwood and add to 3 quarts of water. Boil for 1 hour and then let sit overnight. This creates lye water* (which you can also use to make soap). Strain the precipatated ash out of the water.

2. Use this lye water the same as you would the water above with the pickling lime added. Follow the rest of the instructions above.

*A note about pickling lime and lye water:
Pickling lime and lye water is caustic and can cause irritation and/or burns if wet hands are exposed to it for too long. If it comes into contact with your skin rinse immediately. If any spills onto any surface wipe up immediately and rinse area. I found out the hard way that it will etch stainless steel (even though it’s nonreactive) and granite counter tops if not cleaned up right away. 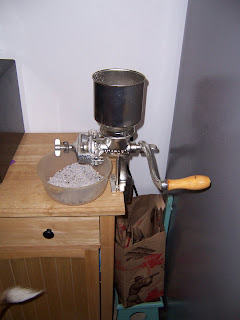 Once the corn is no longer wet you can run it through the mill. We own an electric mill, but in our move we misplaced it so we went to buy a hand crank one. We first bought a Shule Mill from a Kitchen Supply Store. It was the only mill they had. An hour later and after only producing 1/2 a cup of course flour I was done! It was incredibly inefficient. That one will be returned this week. We then went to Beer, Beer &amp; More Beer and purchased a Victoria Grain Mill. What a difference! In 30 minutes we had run 8 cups of flour through 3 times.

Roll into balls about 1 1/2″ in diameter. Slightly flatten and put in center of tortilla press between two sheets of wax paper.

Cook each tortilla on a hot griddle for about 30 seconds to 1 minute each side. Allow to cool and then freeze until needed. 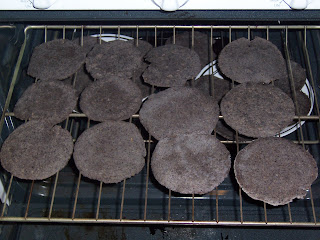 These tortillas are really tasty. They came out this cool blue/purple color which makes them distinctive.