While I was putting together the presentation for the chicken class I taught this past week I spent a large amount of time going through pictures we’ve taken over the last several years. Boy do I need to reorganize them! But that’s besides the point.

One of the things I found so interesting was seeing where we’ve come from. When we moved in this is what our property looked like from our back door. There was a 6′ wood fence where those posts were that served absolutely no purpose other than blocking your access to the rest of the property.

Six months later our patio was almost in, there was a new chicken coop, garden beds (not quite visible in this photo) and a new fence that was our unsuccessful attempt at keeping Squeak out of the garden area.

Three months later we had a new and improved chicken coop, a finished patio and landscape plants in.

The following summer it had grown up considerably. The coop was moved back to the end of the property. 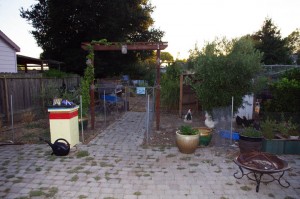 Then this past July it was like we had gone backward. All the landscaping had been ripped out and the coop was back.

There have been a few small changes since then. Plants are planted in the bed on the left and we have new fencing up for the chicken yard. Ignore all the random stuff around the yard right now.

But the yard isn’t the only thing that’s changed over time. So have the animals. The first thing I noticed in old photos of Bella and Daisy was their rather poor condition. When we got them they weren’t in the best of shape.

Bella’s coat was wiry and thin with a brownish tint (sign of lack of minerals particularly copper). She was thin and her rumen was pretty much nonexistent. I also didn’t realize how young she was. She must have only been 6-8 months old when she had Daisy. Daisy was in better shape but that was primarily because she was still nursing off of Bella intermittently. I’m sure Bella’s previous owner never grained her during her lactation. I know she also didn’t have access to mineral either.

One thought on “Looking Back”