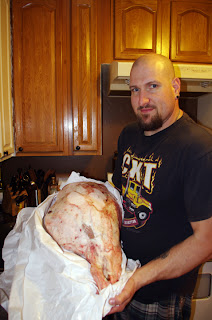 It was a mighty pig.

We decided finally to not actually raise one because we didn’t want to anger our neighbors. They already put up with enough from us. I don’t think there are enough eggs in the world to make them OK with us raising hogs here.

So instead we took a trip out to an organic dairy farm out in Petaluma. You’re probably wondering what an organic dairy has to do with hogs. Well, it turns out a farmer that raises dairy cows for Clover Stornetta has some side projects including a raw goat cheese making operation and raising hogs. Raising hogs on organic grain and milk.

I would have preferred pastured hogs, but beggars can’t be choosers and these hogs were a fantastic price. Let me just say, for the record, that we can’t estimate a hog’s weight to save our lives. I’ll blame not spending enough time around them to actually know. The last hog we bought live we thought was around 100lbs live weight. Turns out we were about 50lbs off. The hog we chose at the organic dairy we though was probably around 250lbs live weight. We totally missed the mark. The hang weight ended up being 287lbs. The ham we are looking to cure and hot smoke for April’s Charcutepalooza challenge weighs 27lbs!

I was kind of bummed that we didn’t get a lot of what we wanted from the hog. The butcher didn’t give us the fatback, leaf lard, feet or jowls. Next time we’ll know to specify exactly what we want prior to the slaughter rather than after, when many of the things we wanted were discarded before we could request them.

Next time I want to be more involved in the butchering so I can make sure we get all the parts we want.

6 thoughts on “We Got Our Pig”