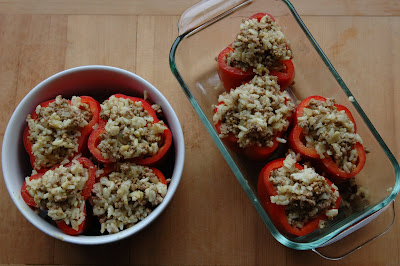 Controversy! Intrigue! Catfights! Who knew that a simple question like “what recipe should I post on my blog this week?” would elicit such strong responses?

OK, I’m totally exaggerating. There were no catfights, nor was there really much intrigue. There was, however, controversy. Which is totally cool. It’s nice to know that people out there care about the recipes I post, and that the silly little foodstuffs I make in my totally-not-professional kitchen are actually inspiring people to get out there and cook! I promise that if you voted for baguettes, your time is coming very soon.
I’ll tell you, even I am conflicted about my post this week. I’ve been sitting on a whole oat and honey baguette recipe for about a month now that I KNOW is wonderful. I’ve made it successfully at least 10 times in a row (barring one incident involving benadryl and an uncanny ability to zone out the sound of the kitchen timer), and it is possibly the most reliable and tasty bread recipe I have tried thus far.
However, the pictures I took of the dough making/baguette shaping process need a little more editing before they are ready for public viewing. The stupid rain came and made my available “natural light” look all blue and icky. So…submitted for your viewing pleasure, I present the OTHER delicious thing we’ve had on the menu this week: curry stuffed bell peppers. 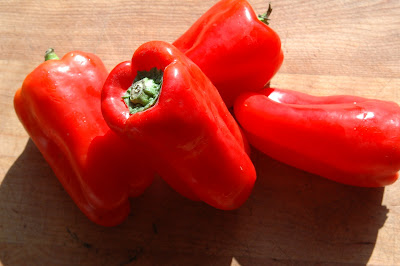 As a friend so astutely pointed out on facebook (thanks for your unwavering support, there, Hank), bell peppers and tomatoes are far from in-season, which I suppose makes this recipe post controversial for more than one reason. Still, I will back up my use of these tasty peppers by saying that they are not only semi-local (grown in the Sacramento area in a greenhouse set up), but are also organic. I got them, as well as the tomatoes and onions, at the farmer’s market by my house, and I feel totally OK with that. Once our greenhouse is up and running in the back yard, we’ll be trying to grow them in March, too! 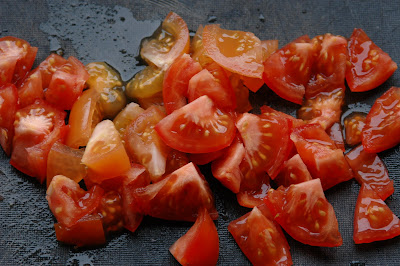 A little back story on this recipe: I used to work at a travelers’ hostel in the Tenderloin area of San Francisco. One of the great perks was that the hostel was walking distance from the Civic Center farmer’s market. Another great perk was that we had a GIANT kitchen and cool dining area where our guests could cook their own dinners, or even work together for a big family-style potluck, with each guest preparing a dish. One such evening, a guest of ours came back from said farmer’s market with a big bag of beautiful red bell peppers, golden globe-like onions, and juicy tomatoes…and announced that he was going to make us (the staff) dinner.
Not one to say no to free food (particularly given that the produce was coming from the farmer’s market, which said something about the quality of ingredients, as well as the possible expertise of the chef), I gladly accepted his offer. 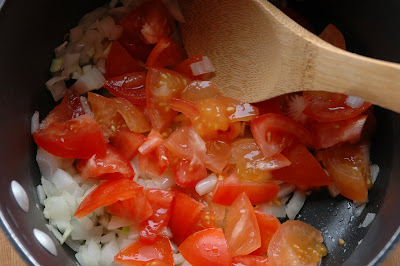 About an hour later we were sitting down to a beautiful pan of bell peppers stuffed with rice, beef, onions, and spices, all covered with a fresh tomato/cilantro sauce – heaven.
Years later, I found this recipe scribbled onto the back of a tour booking receipt, stuffed into a drawer (you know, for “safe keeping”). I had completely forgotten that delicious dish! The chef had been glad to give me his recipe, but neglected to give me his name, so I am sad to say I can’t give credit where credit is due. I shall have to show my appreciation by passing this simple, hearty, elegant recipe on to you. 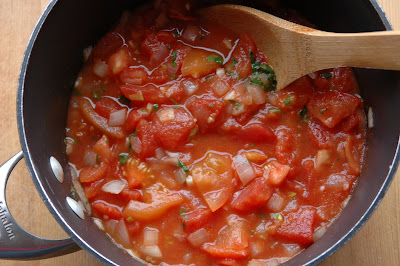 **Note: I haven’t tried it yet, but I bet this would be AMAZING with ground lamb and couscous. Just sayin’.**
Curry Rice and Beef Stuffed Bell Peppers
serves 6-8
4-6 large red bell peppers
for the stuffing:
1 1/2 c long grain rice
1 lb organic, free-range ground beef
2 Tbsp olive (or sunflower) oil
1 medium yellow onion, peeled and diced
2 cloves garlic, minced
1 tsp curry powder
1/2 tsp cumin
1/4 tsp ginger
1/4 tsp coriander
salt and pepper, to taste
for the sauce:
4 large, ripe tomatoes, diced (alternately, 1 can of diced tomatoes)
1 medium yellow onion, diced
2 cloves garlic, minced
cilantro, to taste (I used about 1 tbsp, roughly chopped)
Prepare the rice according to the cooking instructions (different kinds of rice will use different amounts of water, and will take different amounts of time to cook). You want the rice to be soft and not too wet, and ideally there should be about 3-4 cups of it when it’s cooked and fluffed. 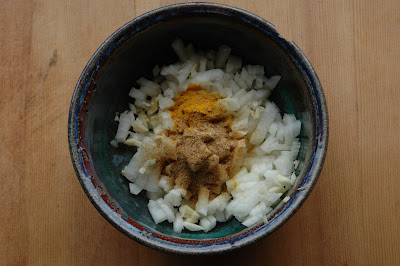 Prepare the peppers: If the bell peppers are short and squat, you can roast them whole. Just cut off the caps (any viable pepper bits that you remove can be chopped and added to the tomato sauce), and scrape out all the seeds and white pithy stuff from the inside. If the peppers won’t stand on their own, cut a little bit off the bottom to even them out. If your peppers are long and thin, you can cut them into two shallow boats, or cut them down the middle (cross-section) making two little cups. You’ll have to remove the stem from one of the cups, which will make a hole in the bottom. this is OK, just be careful when serving that the filling doesn’t all come out the bottom! 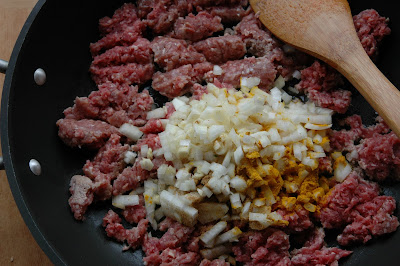 Prepare the sauce: In a saucepan, sautee the onion and garlic until translucent, but not brown. Add the tomatoes and simmer until a thick sauce forms. If you need to, add some water to prevent burning. Once it has softened to your liking (it will be chunky), mix in the cilantro and turn off the heat. This should look like a thick marinara sauce or chunky salsa. 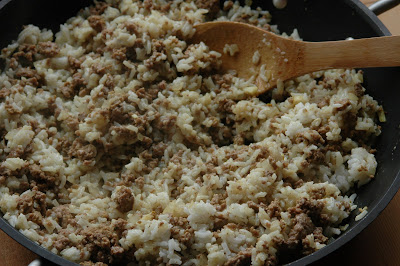 Prepare the stuffing: Brown 1 lb of ground beef in a large skillet (use oil if needed to prevent sticking). Add onions and garlic, as well as all the spices, and stir until the meat is cooked through, the onions are translucent, and everything is evenly coated (it’ll be yellow from the turmeric in the curry powder). Add in about 3-4 c rice, and again stir to combine. Taste for salt (I put in about 1/4 tsp, as well as some black pepper). 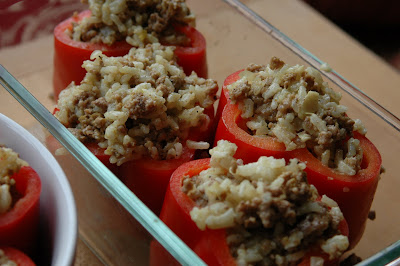 Place the peppers into a greased baking pan (we broke my favorite 9 x 9 pyrex last week, so I had to use two smaller pans), and stuff them with the rice/beef mixture. You can pack the rice in pretty heavy, but don’t compress it too much or it can get chewy and gelatinous when it cooks (you want enough room that the tomato sauce can drip down into it while it’s cooking).
Bake these pepper cups at 350 degrees for about 45 minutes, or until the peppers are just beginning to soften. Ladle the tomato sauce over the tops of the peppers and bake for about another 10 minutes, or until everything is hot. 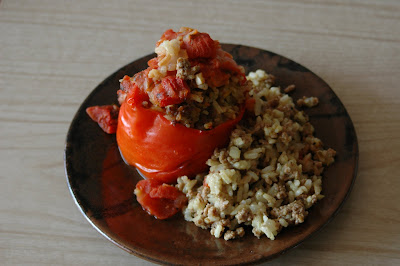 The man who passed down this recipe said that you can optionally add cheese (I think a cumin smoked gouda or an asiago would be tasty), but it really doesn’t need any cheese, or anything else. I did, however, quite enjoy the leftover stuffing last night at band rehearsal (I had extra – oh, bummer) tossed with a bit of parsley…along with some delicious potato pancakes made by Alanna of Bojon Gourmet.
Enjoy!