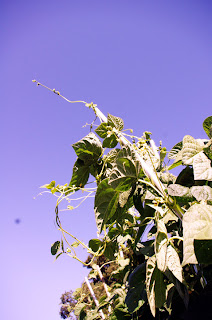 I’m seriously starting to feel like Jack. This year’s bean trellises were put in at around 10′ high. We thought that would be plenty of space. It apparently isn’t. So now they are producing quite heavily. I think I may have planted too many. For the last three days I’ve been picking about a pound a day. But of course, I can only reach so high. Tom can only reach so high. I think we’ll need to bust out the step ladder to reach the top.

I’ve said it before and I’ll say it again. I have been taken aback this year by our garden’s productivity. I think a large part of that is due to all of last year’s failures from the well water problem. Besides the well, last year was definitely a learning curve for us. It still is. So here are some of the things I’ve learned.

1. Beans grow faster and taller than corn! We planted our beans and corn at the same time in the same beds. Some of the sweet corn never stood a chance. The Indian corn, however, seems to be ok. But I think that’s only because the Indian corn grows to about 10′ tall.

2. Volunteers will always outshine the “planned” plants. So far this seems to read true every year. The last two years it was tomatoes. This year it’s squash. Our volunteer squash have set out for world domination.

3. Watermelons here really do need to have black plastic under them to heat them up more. It just doesn’t get warm enough here for them.

4. Not spraying for bugs seems to work out better than even spraying with organic pesticides.

5. More sun for the sun lovers! Next year the corn and squash will be moved to a warmer spot.

6. Pick one variety and stick with it. Do we really need 3 varieties of corn when 1 that is dual purpose (Bloody Butcher) will work just fine? Do we really need pumpkins? We don’t eat them and we never get around to carving them for Halloween. So next year we’ll just do zucchini so we don’t have to deal with cross pollination.

7. I need to pay better attention to my layout. This year I placed the cucumbers almost in the exact same spot they were in last year. Fortunately it hasn’t caused a pest problem yet.

8. Put compost down in the Fall, not the Spring. Bad things will happen if you don’t!

9. Plant onions and leeks in the Spring, not the Fall. Otherwise they bolt prematurely. Garlic, however, seems fine planted in the Fall.

10. Don’t wait to long to harvest parsnips or they start to get pithy and taste gross.

As the season wears on, I will have more lessons learned, so stay tuned!

I know Wednesday is usually my harvest day, but reality has set in and the list is starting to get unwieldy. Instead I’ll just be updating the sidebar totals weekly to reflect our savings and expenditures. At the end of each year I’ll do a rundown of what exactly we harvested and how much.

11 thoughts on “Jack and the Beanstalk or Things Learned”