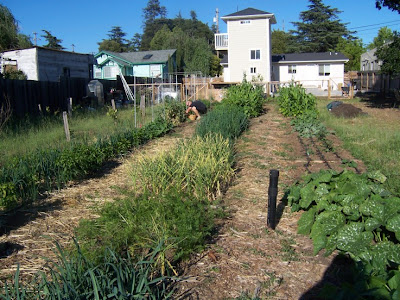 Dog Island Farm is an urban farm located in the San Francisco Bay Area. We have a mild Mediterranean Climate with wet, cool winters and dry, warm summers. The farm is located close to the San Francisco Bay, which moderates our temperatures with its marine influence.
We were fortunate to find a large residential parcel in the city – just over 1/4 acre. The house is a small 2bd/1ba single story built in the 1950s. The lot was originally a fruit orchard (our next door neighbors own the original farmhouse) that was then subdivided. Our lot got the old well and associated water tower. We got the well working but were disappointed when we found out that due to heavy agricultural use, the well had saltwater intrusion from the bay. The previous owners, however, had converted the old water tower into a loft apartment of sorts. Nothing about it is legal, however, so we won’t be renting it out anytime soon.
When we bought the lot there were several very pooly maintained fruit trees, overgrown vinca, a large row of artichokes, lots of junk and our own colony of yellow jackets. We removed the yellow jackets by force, and basically tore out all the trees and overgrown plants except for a small citrus tree (seen above on the right) and the artichokes. It looked really bad but we thought maybe we could save it. I don’t feel bad for tearing out the trees since we replaced the half dozen we took out with 24 new fruit trees and 2 olive trees.
First things first, we dug our vegetable garden beds and immediately started planting. We then put in a large patio, some landscaping and various other things. The citrus tree came back with a vengeance. It’s amazing what a little TLC can do. 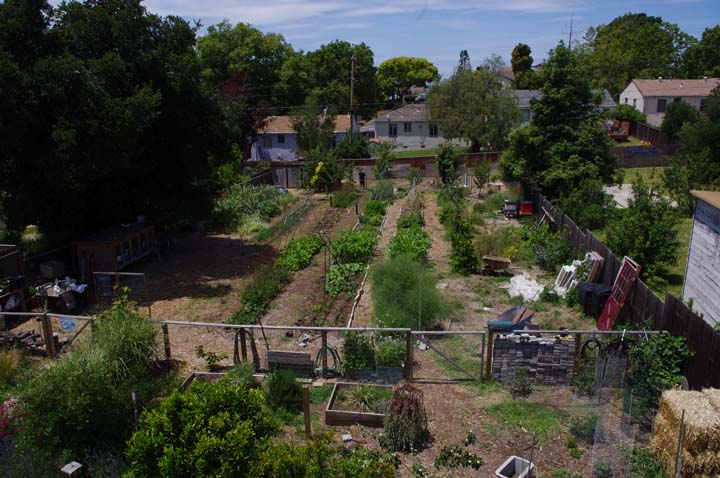 That poor little citrus tree is here ^. It is now covered in oranges every season.