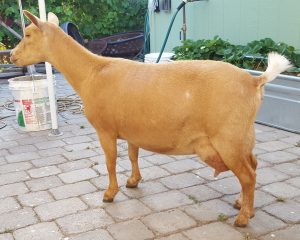 I am so very excited to introduce Castle Rock Lady Rainicorn! Not only does she have the MOST AWESOME NAME EVER but she is the big boss around here.

Rainy is out of SGCH Algedi Farm H Purple Rain 4*M 4*D VEEV 90 by  CRF Castle Rock Harvest Moon +B *S. I have been wanting to incorporate Rain’s genetics into my herd for a couple of years but when she was retired in 2013 I thought I had lost the opportunity. Of course at the worst possible time for us to take on another doe, Sarah at Castle Rock Farm asked me if I would be interested in Rainicorn. I knew I shouldn’t. I already had more does than I wanted. But then I met her and fell in love with her. I knew immediately that I had to make room for her.

Rainy is a long and level doe with a very wide flat rump, nice angularity and naturally stands uphill .  She has good body capacity and a very productive mammary system. She tends to fill from the bottom up and I have yet to get that rear udder filled because she just keeps making more room for milk.

Her dam, Rain, earned a Top 10 award in both the one day test (2010) and the 305 day test (2011) in milk, protein and butterfat. Rain had a high and wide udder with a broad area of attachment, strong MSL and easy to milk teats. The 2017 appraiser noted that even with being so capacious her udder barely moves when she walks because it’s so well attached.

Her sire, Harvey, has six daughters that are now finished champions and another daughter, Castle Rock Lotus 2*M 5*D AR2774 owned by Curbstone Valley Farm, who has been on the Top 10 list for 3 years running. Harvey’s dam, Castle Rock Once Ina Blue Moon earned a Top Ten award in the one-day milk test.

Rainy had a tough first freshening with a large buckling that decided he wanted to take the shape of a pretzel before coming out. Things got a bit too invasive and due to swelling we weren’t able to get the kid out vaginally so she had to have an emergency c-section. Fortunately she healed up fantastically and you wouldn’t even know she had an issue. Her second freshening – again a single buckling – was much more normal. Her third freshening with twins was also normal.

She freshened with a very capacious udder with a nice foreudder, open orifices and well defined medial. She has very level, highly productive lactations and I hope to see her make Top 10 following in her dam’s and sire’s dam’s footsteps.

Unfortunately Rainy’s last kidding nearly killed her and with two previous rough kiddings I’ve made the decision to retire her and let her be a pet and just enjoy mothering the kids born each year (her favorite thing).