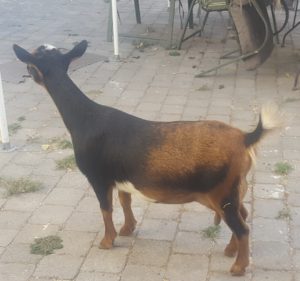 Finally a doe kid from Rainy! I chose to use Mad About the Moon because I’ve long admired his dam, Moon Beam, and the single buckling Rainy had the previous year by Black Oak was very nice. The two closest does in his lineage – Moon Beam and Sarafina – are both EEEE 92. I’m hoping that Moon Beam’s fantastic udder with nearly ideal teat placement, strong medial, and nice high rear udder would blend with Rainy’s high production. 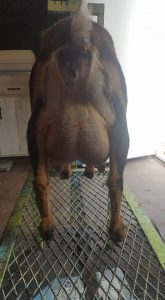 Skylla has a ton of width between the hocks with a nice high escutcheon. Her front end assembly is similar to her dam’s except that her shoulders are tighter, which is a nice improvement. She’s got nice angularity and inherited her dam’s wide flat rump. I do believe this is the nicest kid we’ve had born here. I look forward to seeing what this girl will do.

Skylla freshened with exactly the udder I was hoping for. Her rear udder is high and very well attached. Teats are larger than her dam’s and much more plumb. What I’m especially thrilled about is that production didn’t suffer at all with this breeding.