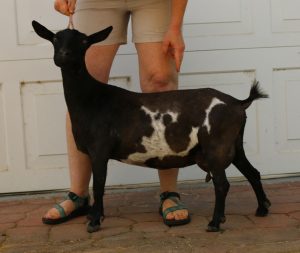 I absolutely love this girl. Kahlua is about as sassy as they come. Always preferring to hang out with us for some scratches while everyone else fights over feed. She will forcibly stick her head under your arm when you’re sitting down to remind you that she’s there and requiring scratches.

Kahlua has, since the day she was born, been an incredibly long and very feminine doe. She has a nice long rump and good spring of rib. I’d like to see straighter legs and less hocking in the rear. Judges have commented on her correct conformation and good length of body. She is a slow maturing doe and at her 2017 linear appraisal the appraiser said she thought she was a lot younger than she actually was. Her dam line is known for it’s slow maturation and we expect her to finally hit her stride for her 4th freshening. 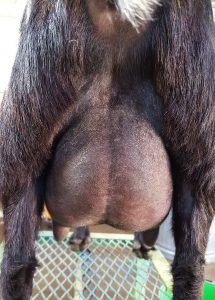 She looks very similar to her sire’s dam, Raven, when she was Kahlua’s age. I’ve admired not only Raven, but Clark’s maternal half brother, Guy Noir who has sired many champion daughters. Clark’s sire, Harvest Moon is also producing very nice finished champions. Harvey’s dam, Castle Rock Once Ina Blue Moon earned a Top Ten award in the one-day milk test. I hope that some of these amazing traits exhibit themselves in Kahlua.

Kahlua’s dam, Foggy River Farm Bailey’s OnIce was a first freshener, but she did have wonderful udder texture, open orifices, and a strong MSL. If hay quality was better (the extreme drought really effected quality this past year) and if Bailey wasn’t such a picky eater I’m sure her production would have been an improvement over her dam, Castle Rock Sedona. Bailey’s sire, Gobi was out of Lost Valley TB Infinity who earned her milk star as a first freshener, is a finished champion and has been awarded the Superior Genetics designation from ADGA.

Kahlua freshened with a well attached udder with easy to milk teats and a commendable capacity for a first freshener. I’d like to see her teats closer to the medial and less forward and more capacity, of course, but she’s an improvement in production over her dam’s line. She’s out producing her dam’s dam who was a 4th freshener when we retired her. She is the fastest to milk out in my herd.

Unfortunately she started her first freshening with a rough kidding, a uterine infection followed by another illness that didn’t resolve until just a couple of days before her Linear Appraisal. Her first LA score was disappointing but after coming off of several weeks of ongoing illness I gave her the benefit of the doubt. The following linear appraisal she got a solid score which was a big relief.

Kahlua had one last rough kidding with a DOA kid so we’ve decided to retire her. She will get to live the fat and sassy pet lifestyle from here on out.