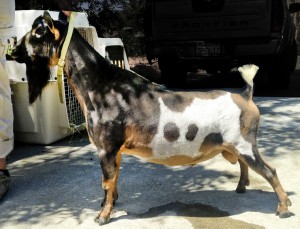 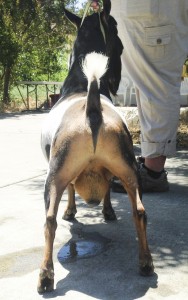 Clark is sire to Dog Island Kahlua N Cream 1*M. Seeing several of his daughters freshen at Harley Hillside Farm he does sire consistently nice does.

Graupel is quite dairy with a very well put together front end with strong pasterns.

One of Graupel’s other daughters, Castle Rock Fedora, freshened with a very high, capacious udder and I hope that Graupel passed that on.

We kept his daughter Dog Island Mudslide out of Dog Island Kahlua N Cream 1*M. She freshened with a nice udder with well place, very large teats that are easy to milk. She did freshen with mastitis so we’re hoping next year she evens out some.

Several years ago I wanted to use Cleveland on all of my does but he was unfortunately out on lease. When he was once again available I was so excited to use him. His daughters tend to be very dairy with very correct udders and extremely nice teat size and placement. Cleveland placed second at the 2015 National Show Senior Get of Sire. Seven of his daughters (with more well on their way) are finished champions, and five of those have earned their Superior Genetics designation.

When we got only bucklings from the breeding we kept Dog Island Irish Car Bomb *B intact because he was so nice. I hope he passes on some of the great things his sire offers on to his own daughters.

We kept one daughter of his out of Dog Island Mudslide. We have big hopes for Firestorm.

Castle Rock Mad About the Moon

When Sarah said she had Castle Rock Mad About the Moon back on her farm I knew I wanted to use him. The two closest does on both sides are EEEE 92 and Moon Beam has a lovely udder with large teats that have nearly ideal placement – something I could definitely use in my breeding program. I had several kids born here that were sired by Black Oak, however they were all bucklings out of does that I wasn’t ready to keep bucks from. I really liked what I saw from those kids. We Castle Rock Lady Rainicorn 5*M to him and kept Dog Island Skylla. Skylla is one of the nicest kids we’ve had born here. I can’t wait to see how she freshens. 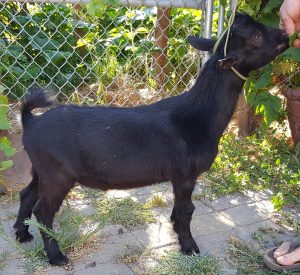