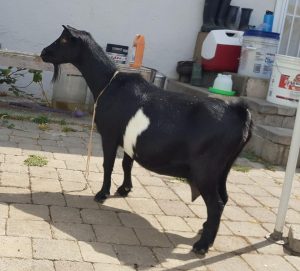 Her full sister SGCH Castle Rock Breakin My Heart 6*M VEEE 90 is one of my all time favorite does proving herself at just 2 years old as a 2nd freshener.

The first thing I noticed about Jess is her length and body capacity. Black is quite slimming so the photo just doesn’t do her justice. She’s nice and level with a very nice, long rump. She’s angular and stretchy with good dairy strength.

She freshened late this year so she didn’t have a chance to be appraised and she hasn’t been on milk test yet. Both programs I’m looking forward to putting her on. She’s nearly dried off so udder photos will have to wait but I’m so looking forward to freshening this girl.

Jess freshened with a very productive udder. Unfortunately we didn’t get along on the milk stand and  she has moved on to a farm that she is a better fit for.