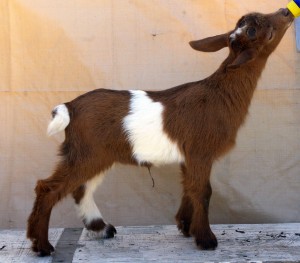 Cleveland has proven himself to be an exceptional sire having 3 finished champion daughters so far, with many more well on their way. He handily earned his superior genetics designation along with being named an Elite Sire in 2015. He won 2nd Place Get of Sire at the 2015 ADGA National Show. Choosing him to breed Kahlua to was a no-brainer. Kahlua had only ultrasounded with a single so I spent the majority of her pregnancy telling her she better have a doeling in there. Lucky me, that single kid was the doeling I wanted.

Stormy was born after dark right in the middle of one of our biggest storms of the year. I hadn’t thought of any names because I didn’t want to jinx it but by the time we got back to the house right after she was born she had her name. Dark N Stormy seemed fitting, not just because of the weather but the cocktail is made with ginger beer and as you can see, Stormy is a bit of a ginger herself.

She walks and stands with a good space between her hocks and is naturally uphill. I like her angularity and brisket extension. She reminds me so much of her dam at this age (other than her color). She’s very confident and quite bossy. I wouldn’t be surprised if she challenged Rainy, our current herd queen, for the position when she’s older.

Unfortunately at just 6 weeks old, Stormy presented with several congenital abnormalities that she wouldn’t be able to survive and had to be put to sleep. It was heartbreaking to lose her and we lost what could have been a huge contribution to our future herd. She will be greatly missed.