Foggy River Farm Bailey’s OnIce was a first freshener when we had her. She had wonderful udder texture, open orifices, and a strong MSL. If hay quality was better (the extreme drought really effected quality this past year) and if Bailey wasn’t such a picky eater I’m sure her production would have been an improvement over her dam, Castle Rock Sedona. Bailey’s sire, Gobi was out of Lost Valley TB Infinity who earned her milk star as a first freshener, is a finished champion and has been awarded the Superior Genetics designation from ADGA in 2015. 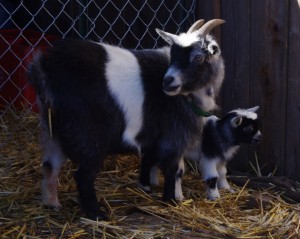 Daisy, a pygmy, was a moderate producer of very rich, creamy milk. She had very large, easy to milk teats. She had a lot of capacity and wide enough to push out a 6 lb buckling (pictured just a few hours old) when she, herself, was only 40 lbs. She could have used better attachments and larger orifices.