I posted over a year ago about seed resources and the varieties we plant. Well over time things have changed. We’ve learned more about our property and weather patterns here and have been able to adjust it. Of course it will always be a moving target over time, but for now these are what we’ve settled on. 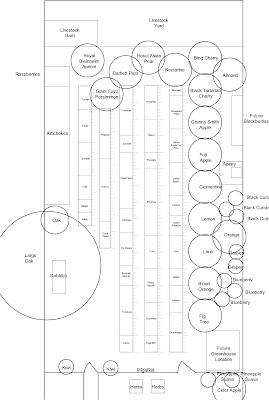 So this is our layout. Click on the image to get a better view. I’ve located everything by using companion planting and crop rotation. Next week I’ll be finishing up my series on garden planning and you’ll see what I mean by companion planting.

All of our varieties are open pollinated or heirlooms. Here are the following varieties we’ll be growing and why we are choosing them:

Cabbage: January King and Mammoth Red Rock. Both outpaced all other varieties of cabbage that I’ve grown.

Corn: Bloody Butcher. I love this corn and I don’t know why I didn’t just stick with it last year. The stalks get HUGE! Usually around 12′ tall. Each stalk has 2-6 large ears of corn. The corn can be eaten young on the cob or you can let it dry for grinding and posole. It makes wonderful purple tortillas.

Eggplant: Rosa Bianca. We grew these and Ping Tung last year and these outgrew and out produced the Japanese style eggplants.

Lettuce: Cimmaron. A red romaine type that I have found to be slow to bolt and doesn’t get bitter in the heat.

Parsnip: Hollow Crown. These worked really well for us and stayed tender for quite awhile. They also took well to planting after germination.

Peas (Snap): Amish Snap. To be honest, there aren’t very many heirloom snap pea varieties and of them these grow the best and taste the sweetest.

Peppers (Hot): Joe E Parker. A fabulous roasting pepper from the Hatch region in New Mexico. This year we’ll be definitely growing a lot more of these! Jalapeno. We’re going to make another attempt at growing jalapenos. Every year they come out too mild. This time we saved seed from some very hot jalapenos. 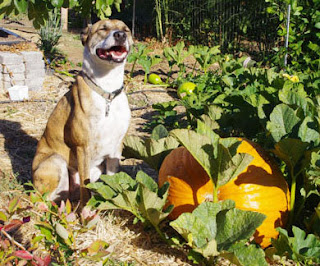 Pumpkin: Howden and Ghostrider. At our Napa house we grew Ghostrider. They were prolific. We got 14 pumpkins from 3 plants. They were all very uniform in size and shape. Unfortunately they haven’t been available since then but I was lucky enough to find the seed in England so I brought it home with us. Howden is what we had last year. Also prolific and HUGE. Seriously HUGE. 60-70lb pumpkins.

Squash (winter): Marina di Chioggia, Pennsylvania Dutch Crookneck. Marina di Chioggia is hands down the best tasting squash I’ve ever eaten. The flesh is dense, dry, very sweet and smooth as silk. I love the Crookneck aka a Neck Pumpkin. It’s a predecessor to the now popular butternut squash. It just has a much longer neck – sometimes longer than 2′.

Tomatoes: Hillbilly, Brandywine, Black from Tula and Roman Candles. These all did great last year even though it was really cold. The Brandywine and Hillbilly both gave us tomatoes that singularly weighed over a pound.

Watermelon: Orangeglo. Best watermelon I’ve grown. I’ve grown probably 5 or 6 different varieties and these are always the winners. They grow larger and sweeter than other varieties I have tried.

New Varieties:
Beans (Green): Royalty Purple Pod. After missing so many pods last year, we’ve decided to grow a bean that has a higher contrasting pod. In this case they are purple.

Beets: Golden. I want to try a non-staining variety.

Carrots: St. Valery. Just trying out a new variety. I’ve had good luck with Scarlet Nantes but I want to try something a bit more…exotic.

Celery: Giant Pascal. One of the varieties of seeds that we picked up in the UK.

Cucumber (pickling):  Delikatesse. We normally grow Double Yield with decent luck but this year decided to try a different variety. This one is a rare German variety.

Cucumber (slicing): Melon Metki Dark Green Serpent aka Armenian Cucumber. Technically it’s a melon that slices and tastes like cucumbers. Tom’s been begging for me to grow this.

Kale: Cabbage Nero Di Toscana aka Dino Kale. I love this variety for making kale chips so I want to try my hand at growing it.

Melon: Bidwell Casaba. Every year I try a different melon because I’m not quite happy with the previous year’s crop. This year I’m going with this variety which is supposed to be huge and the flesh has been described to taste like “heavenly orange sherbert” by Amy Goldman.

Onions (red): Red Baron.  One of the varieties we picked up in the UK. Said to be long storing, which is uncommon among red onions.

Onions (yellow): Bedfordshire Champion. Another variety of seeds that we picked up in the UK. Said to be a long storing type.

Peppers (sweet): Golden California Wonder. I’ve grown the green version of this so I’m going to try a yellow variety.

Peppers (hot): Chocolate Habanero. Esperanza from Pluck and Feather Farm told me the trick to growing spicy jalapeno peppers was to plant them next to habanero peppers.
Tabasco. The pepper made famous by the hot sauce. I may just try my hand at making hot sauce with these.

Radish: French Breakfast and Pink Beauty. Poor Tom doens’t like radishes so I haven’t grown them. I LOVE them though so these are the ones I’m trying out.

Rutabega. Swede Invitation. A variety we picked up in the UK as well.

Salsify: Mammoth. I’ve never had salsify. I’ve never even seen it for sale. I’ve seen it growing as a weed in our yard so I know it grows here. It’s said to have the flavor of oysters, which worries me. I LOVE oysters but a vegetable that tastes like one is just wrong. But I want to try everything once so it will get a small spot in the garden this year.

Squash (Summer): Golden Zucchini. We decided to go with something a little more colorful.

Tomatoes: San Marzano. The quintessential paste tomato so we’re trying it this year.

Turnips: Purple Top Milan, Golden Ball. Tom loves turnips. I’m not such a fan but since I get to grow radishes he gets to grow turnips.