We knew the morning of April 12th that Kahlua was going to give us kids by the end of the day. Her ligaments were gone, her udder was filling and she was getting restless. She showed all the typical signs of imminent labor. We kept an eye on her throughout the morning while we did our usual spring chores – prepping and planting garden beds, harvesting artichokes, feeding animals.

By noon I decided to sit with her and soon noticed she had started having contractions. They weren’t close together so I knew I had a little bit of time. I called my friend, Brande, who has been present for all of our kiddings (it’s always great having another set of hands to help catch and clean kids), and Tom down to sit with me.

And then we waited. And waited some more. Her labor had stalled out. We were all getting restless. 8pm passed. 10pm passed. We were starting to get concerned. In the meantime I was texting goat breeder friends. Lynda at Foggy River Farm said that sometimes the stalled labor is due to a malpresented kid. Fantastic. 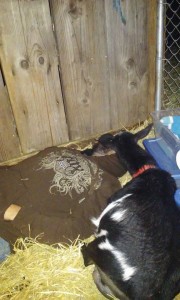 At 11pm Tom laid down on the ground to take a nap. Not 30 sec after covering his eyes with his hat Kahlua siddled up to him, laid down and started pushing. Well if that’s all we had to do we could have gotten this over a long time ago…

At first things seemed to be working until I saw a nose. Just a nose. Well that’s a slight problem. Yep, Lynda called it. A normal presentation is a kid in the dive position. Both legs out front with the head following. There were no legs. Just a head and Kahlua was pushing as hard as she could. Progress seemed to be going very slow and there was no room to get a hand in . The best thing I could do was get the kid’s airway cleared so it could breathe in case the umbilical cord got pinched off and try to get that kid out carefully and quickly. I was finally able to get my hand in far enough to grab the kid and add some traction while Kahlua pushed. The next kid shot out with little problem. While being a pound larger the second kid was in the normal position and came out very easily.

Both kids are healthy and growing like weeds now. But that wasn’t the end, unfortunately. Kahlua started to go off feed. We were able to get her to eat using Fortified B injections, which can act as an appetite stimulant but by Wednesday she was yawning a lot which can signal pain. She didn’t have a fever yet so we held off on giving her antibiotics and just gave her some banamine. By Thursday, however, it was clear something was going on. She was grinding her teeth and now had a fever of 104.7 (normal is 102-103). A quick call to UC Davis and the vet was pretty sure we were dealing with metritis (uterine infection). The first antibiotic they recommended didn’t seem to be knocking back the metritis like it should have so another call the UC Davis and they had us switch. 7 days of treatment and she was back to her normal self.

We had just over 3 weeks before we were to expect the next two does to kid. We were only hoping that they would go smoothly. Unfortunately we were very wrong.

Tuesday morning, May 5th, it was clear Maggie was going into labor. She was unusually loud and obnoxious so I put her in the kidding stall and called Brande. Her labor seemed to be progressing a lot faster than Kahlua’s labor, but I noticed something concerning. Her discharge  was an abnormal color – rusty brown and opaque. Not a good sign but nothing I could do about it while waiting. 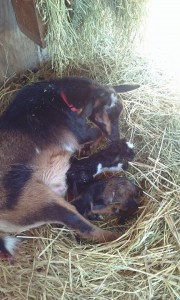 After just a few hours Maggie started pushing. The first kid came out quickly with little problem. The second kid shot out like a bullet in the dreaded breech-butt first position. This was exactly how Maggie was born. Made me glad she got her mom’s wide rump and that the kids were pretty small. Unfortunately, my fears were realized when the back feet of a dead kid emerged. Fortunately it came out easily but being the only doeling in the bunch made it even worse.

Because she had two bucklings we decided to just leave them with her for the time being. We were going to get them used to the bottle for when we took Maggie to shows or had milk test. Unfortunately we soon noticed that Maggie had a fishtail teat (looks like two teats fused together and has two working orifices) which is a very serious fault. I put her up for sale as a pet-only and within only a couple of hours she was reserved by the lady who bought her herdmate/paternal half sister, Trouble (now named Ranger).

Just one kidding left and they say that 90% of all kiddings go perfectly fine. The odds were in our favor. Except when they aren’t. 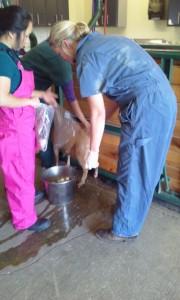 Friday, May 8th, Rainicorn went into labor. Like Kahlua’s it seemed to take her sweet time. Not a particularly good sign but contractions were strong. When she finally laid down around 4pm to start pushing nothing seemed to be happening. The bubble showed up and ended up drenching me in birthing fluid but nothing was in it. There was a problem. Another fucking problem. I gloved up, and lubed up and went in. There was the issue. 4 hooves and a head. There were two kids and they seemed pretty large, trying to come out at once. Fortunately there were three of us and we got to work. After a quick call to Sarah, at Castle Rock, we had Tom pick her back end up and pushed the rear legs of one of the kids back in as far as we could. After 20 min we realized we were going to have to take her to the vet. The one kid trying to come out correctly was too large.

The question was which vet do we go to? UC Davis or Cotati Large Animal Hospital? We were half way between the two but being that it was Friday afternoon we decided to go to Cotati due to Highway 80 being gridlocked with everyone trying to get out of town.

An hour drive got us there to find 2 vets and 2 vet techs waiting for us. They also attempted to get the kids out vaginally but found it impossible so the only next option was an emergency C-section. Anesthesia is not without its risks in general, but that goes doubly so for goats. They aren’t known for handling it very well. It was incredibly nerve-wracking watching the surgery and just hoping everything would turn out fine. 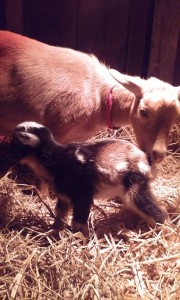 The doctor ended up pulling out a single, very large buckling. The breeder’s worst nightmare is a first freshener with a single buckling. There weren’t two kids like we had thought. He was simply trying to come out with all four feet and his head. Things weren’t looking so great for him when he was laid down in the towel lined rubber bin. He wasn’t breathing at all but the second vet worked and worked on him. She didn’t give up and it’s what saved him. By the time Rainicorn woke up he was trying to stand and had a very good suck reflex. I definitely attribute her smooth and speedy recovery on having him with her.

Our kidding season is finally over after getting progressively worse I’m just happy everyone is fine.

One thought on “A Rough Kidding Season”