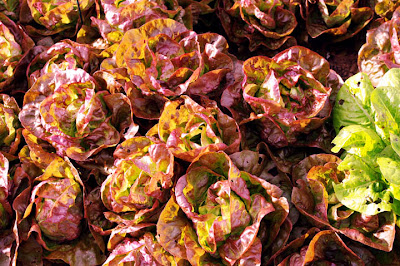 People are picky. They are used to buying perfect produce at the supermarket. Even the certified organic produce is pretty without very many flaws.

Honestly, I used to be one of those picky people. That was until I started growing my own food. Holes happen. Since growing my own food I have to wonder how even organic food is so flawless. Then I realize that just because it’s organic it can still be drenched in chemicals. It just happens to be chemicals that are from “natural” sources.

We don’t spray anything. The only thing we do use is some Sluggo (iron phospate) around new seedlings to give them a fighting chance against our onslaught of slugs and snails. Now that we have ducks roaming our garden we have to be especially careful about what we spray.

I’ve opened up enough heads of cabbage filled with slugs and worms (earthworms, which perplexes me – a whole other post) and found enough dead earwigs in cooked artichokes to get over my pickiness. Don’t get me wrong, I’m not racing to eat a slug even by accident and I do cut out the damaged parts, but some holes in a couple of leaves doesn’t make the entire thing garbage. When you put a lot of effort into growing food you realize that holes aren’t scary.

I think it was Lynda Hopkins that said in her book The Wisdom of the Radish “If the bugs won’t eat it you probably don’t want to either.”

8 thoughts on “Appreciating the Holes”