I’ve been pretty hush hush about what our plans will be in the future. Well the future is coming quick and it’s time to spill the beans I suppose because things are about to get C-R-A-Z-Y. 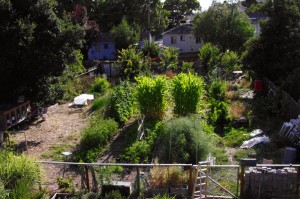 Urban farming in our city is great if you’re doing it for your family but we still don’t have an ordinance that allows us to sell the excess food that we grow to our neighbors and friends. Although, in all honesty, we really don’t have any excess food because we eat pretty much all that we produce and preserve that which we can’t eat fresh. Selling what we produce probably isn’t the best plan for us even if it was legal. Why produce food to sell and just turn around and use that money to replace the food that we sold?

In September 2011 I began a dialogue with our city’s Planning Manager about what I could legally do. Selling food, of course, was a no-go. To sell food, even raw agricultural products, I would have to be zoned for commercial. We’re zoned low-density residential so that wouldn’t work.

Working on the greenhouse

All was not lost though because I had a Plan B. I can get a home occupation permit to sell plants as long as I grow them from seed on my property rather than bring in wholesale plants to resell. That’s easy to do considering Plan B was to only sell heirloom vegetable plants from saved seed of varieties I’ve grown that I know do well in our climate.

Of course when we figured out Plan B is legal here it was a bit too late to get started for the 2012 season. We still needed to get together stuff for our greenhouse project. But now the greenhouse is almost up and should be finished in the next month so I’ll have starts to sell this coming Spring! Stay tuned for the list of plants and varieties I’ll have available.

Most influential farm visit we’ve ever made

But that’s not all we’ve got in the works! Our big Big BIG plan is to become full scale farmers. That’s right, we’re going to take this to the next level. It’s not going to happen overnight as we’ve got a lot of things we need to do first before going all the way. My first task is to start taking ag courses, particularly in ag business, marketing, and sustainability this winter. Then we’re going to need to develop a business plan and research market conditions and figure out what we want to produce. And all of this before we start looking for land. Looking for land will involve checking soils, local climate, water access, flooding, site history (and any contamination that my have occurred in the past), and various other issues. We’ll most likely do fruits, vegetables, and eggs. We’ll have other animals like our goats, probably a pig or two and a cow but only for personal use. We’re also considering some draft animals as well sometime in the future. There’s a lot to think about and to research because one of us will be quitting our job to make this a full time endeavor. The other one will have to remain at work to bring in a second income because if there’s one thing we’ve learned (well, there’s lots of things we’ve learned) from all the farmers that we’ve interviewed, that second income is crucial for the survival of a farm unless you’re the most famous farmer in America (Mr. Salatin).