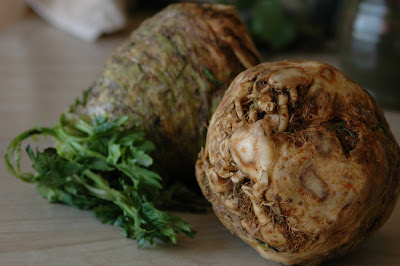 Celery root. Not one of the more glamorous characters on the produce aisle, surely. I mean – this is the part you DON’T eat when you grow celery for the stalks, right? Strange stringy-looking bulbs with little head-sprouts of greenery…they kind of look like those awful screaming mandrake-babies from the Harry Potter movies.

But oh MAN are they tasty.
This is one of those “how could I have gone so long without these?!” kind of vegetables. Somehow I made it nearly 3 decades without once picking up one of these alien-brain-lookin’ things, and now I feel like I have to make up for lost time. 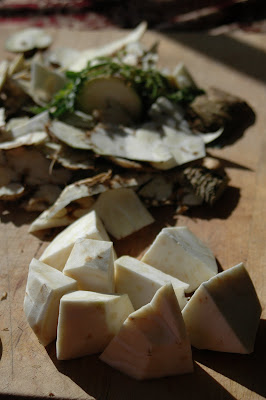 A few weeks ago Rick and I headed out to Sacramento for a night of duck-dining. Hank Shaw (Hunter-Angler-Gardener-Cook) and Michael Tuohy (of Grange Restaurant) were battling Iron Chef-style. The secret ingredient? Duck. Hank’s got a great write-up of the evening on his blog, and I won’t go into too much detail other than to say it was a massively inspiring evening, and an honor to get to eat foodstuffs cooked by such talented chefs.
Also SO COOL to meet Hank (and Holly of Nor Cal Cazadora, who is not only a great blogger in her own right, but an amazing photographer and hunter) in person. I got all tongue-tied and fan-girlish. Yeesh.
I will say that it was the first time I’d had celery root, and was quite impressed that it could stand up so well both on its own, and as an accompaniment to an *amazing* duck breast roulade. 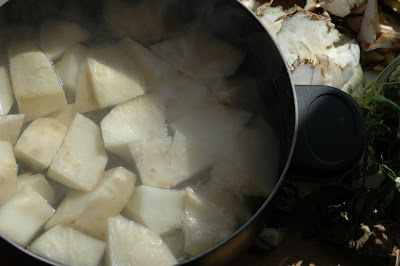 So as Thanksgiving was coming up, I thought I would bring a little something interesting to the table by replacing the standard mashed potatoes with a puree of celery root with butter and cream. Simple, uncomplicated flavors. But so creamy and elegant and delicious that everyone in my family (even my picky-eater brother) were impressed!
Celery Root Puree
1-2 lbs celery root, peeled and cut into pieces
1 large stock pot of water, salted (should taste like sea water)
3 Tbsp butter
1/2 c heavy whipping cream
salt and white pepper to taste 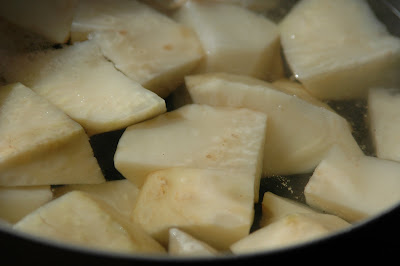 Peel and chop the celery root into manageable pieces (mine were about 1-2 inch cubes or thereabouts). You want the pieces to be mostly the same size so they will boil and become soft at the same rate. When they are very soft (fork-tender all the way to their centers), strain them out of the water and toss them into a food processor with the butter. 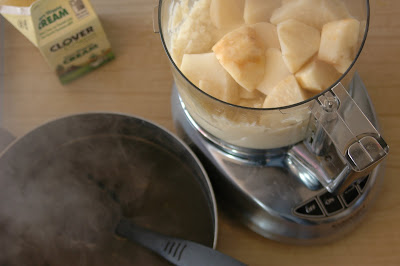 Whip ’em around in the food processor until they are very smooth without any chunks. Add the heavy cream and process again until they are light and creamy. If necessary, add a bit more salt and some pepper (mine didn’t need anything other than a tiny shake of ground white pepper – the salt in the boiling water was enough).
Serve warm.
(interesting discovery: served cold, this is a lovely crostini topping!)