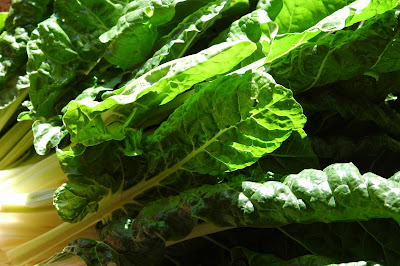 Recovering from an injury is tough in a lot of ways. I’ve been playing catch-up all week trying to get things in order that I had to let slide when I was out of commission (pinched nerve under scapula =no mobility in shoulder/back/neck for almost a week = no bueno!) and still trying to be sort of nice to myself so I don’t so anything stupid like pinching it AGAIN.

Well, one of the things that has been sorely neglected the past week or two is the garden. Maybe I was punishing it for the cold snap and subsequent lack of tomatoes, peppers, and corn. Maybe digging and weeding and pruning and tying up branches was actually too much physical exertion…who knows? But when I went out there the other day, it was a mess: Overgrown cucumbers and gourds trailing everywhere; their tendrils choking and tearing down perfectly good tomatoes, lovage, amaranth, and scallions. Aphids galore taking up residence in the weakest of the tomatoes, the now-dessicated corn stalks, and the (possibly over-watered) brussels sprouts, which had to be removed. 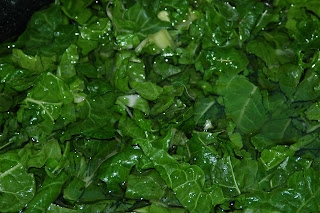 Somewhere in the disaster area, though, was a saving grace – when I have to prune back the chard, I have enough to really cook with. Sometimes, I even have enough to make casserole.
I cut out handfuls. Armloads. Buckets and bins full of chard, chard, chard. It took me two trips to even get it up the stairs and into the house!
Now, the other thing one neglects when one is infirm is grocery shopping. This leads to some rather intriguing culinary experiments, I must say: the asian pear/blackberry/sage pie was delicious. The “all the veggies in the fridge into a pot” pasta sauce? Not so good (thankfully I’m on my feet again or by now I’d be having potatoes with chocolate-pickle sauce or noodles-with-katsup). 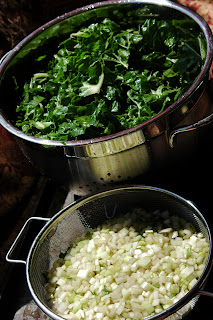 In my digging to clean out the fridge I noticed a forgotten gem – a whole big brick of fresh(ish) chevre that got lost in the dairy-shuffle when I was putting away groceries! Score.
Casserole it is.
Chard and Chevre Casserole
several pounds of chard (with stems), carefully washed
2 Tbsp olive or sunflower oil
1 medium yellow onion (or a few shallots), peeled and diced
1 large clove garlic, minced
1 leek, also carefully washed and sliced into thin rounds
1-2 tsp dried dill (1 Tbsp or more, fresh)
1/2 tsp dry thyme (1 tsp fresh)
1/2 tsp mustard powder
1/4 c flour
3 Tbsp butter
1-2 c milk
1/2 c crumbled chevre (goat cheese)
1 c finely ground bread crumbs (seasoned to taste)
salt and fresh-cracked pepper
Chard Stalks are tough, and very fibrous. They also happen to be a lot of the mass of a chard plant. Take advantage of this, and don’t throw away those stalks! Instead, strip all of the leaf off of the stalk (tear into bits of chop coarsely, and set aside), and slice down the stalks WITH the grain so that each stalk is separated into several long thin spears. then cut those spears crosswise into a small dice. These bits will cook down into deliciously soft bites, and will bulk up your casserole quite nicely. 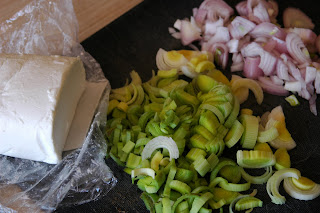 (If you hate the idea of putting that much work into it, at LEAST save the stalks for your next pot of veggie stock. You DO make your own stock, right? RIGHT?)
To make the casserole, start some garlic, leeks and onions sweating in 2 Tbsp of olive or sunflower oil in a very large pan or wide-bottomed pot. If you are feeling courageous (or, you know, if you happen to have some and aren’t opposed to the pig), you could absolutely cook them up with some diced bacon. Add in the diced chard stalks (I used about 3-4 c all together, and they were the dominant body of the casserole). 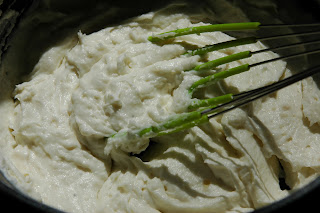 The chard stems ought to sweat out enough moisture to keep everything from sticking to the pan, but if you find things getting dry while they are simmering, add a little water or white wine into the pan to loosen it up.
Add in your spices, and toss everything together, and cook down until the chard stems are tender and don’t feel stringy or tough at all.
Toss the chard leaves (torn or roughly chopped) into the pot in batches, allowing each bunch to wilt by tossing it with the hot stem/onion mixture. When it is all wilted, turn the heat off and allow this to sit while you make your sauce.
For the sauce: melt butter in a pan until it is thoroughly melted and has stopped foaming. Add in 1/4 c flour and cook until it is golden brown. Carefully whisk in the milk (over medium heat) until a thick sauce forms. Melt the chevre into this sauce and remove it from the heat. 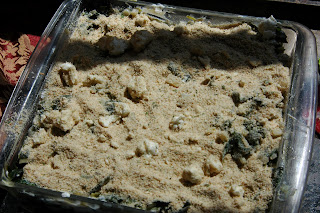 Combine the cooked chard mixture with the sauce and put everything into a casserole dish (I like my square pyrex baking dish for this, but any heavy casserole pan will do). Season to taste with salt and pepper.
Sprinkle the top lavishly with breadcrumbs (I like to make my own, but this time I will admit I used pre-seasoned store-bought crumbs. Why? Because sometimes when you are cleaning out your refrigerator and pantry, you make exceptions).
Bake the casserole at 350 degrees for about 30 minutes or until the top begins to brown and there are bubbles coming up the sides of the casserole dish. Remove, and let cool for at least 10-15 minutes before serving. 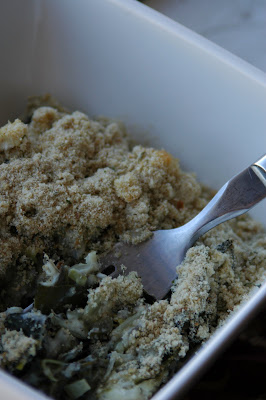 The resulting casserole is gloriously tender and rich with just a hint of zing from the chevre and the herbs. I like to serve this hot as a one-bowl meal, as a great side dish or potluck addition, or even cold – in fact, we took it with us the other day to snack on after we went huckleberry picking in the mountains…but that’s another post. 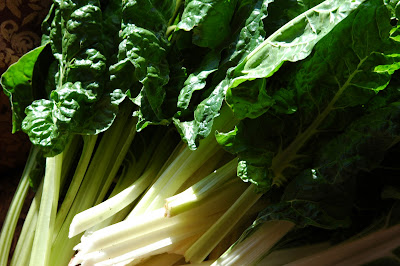 2 thoughts on “Chard/Chevre Casserole (or, “cleaning out the garden and the fridge””