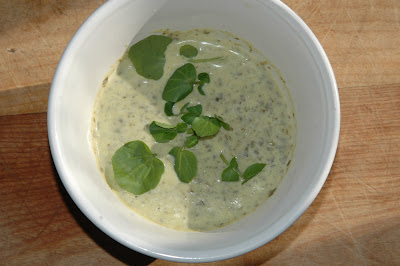 Someday, I would like to leave the city. Move out to a little house on some great land, settle down, and get a farm going. I’d like to end up somewhere with some life to it; some history and some wilderness and some magic.
Such a place is Preston Ranch.
Rick and I were invited up to Preston by some musician-friends of ours to have a May Day celebration last year, and I was struck by the beauty of the land and the simplicity of the lifestyle of the wonderful folks that live there.
Lisa and Edwin have lived on the property for decades. They can tell you all about the wildlife, the history of the circa-1800s church on the hill, and the name of every plant growing wild around the garden. They do all their cooking on a wood stove in the kitchen in the winter, but have a small range out on the porch for makin’ coffee and such when the weather’s nice or cooking when a running wood stove would make the house unbearably hot.
Their garden is covered with little blue-bellied fence lizards, which keep down the bugs and reduce the risk of lyme disease in the local tick population. They are also remarkably cute little things, scampering around in the rock formations Lisa and Edwin have made to keep them around.
There are many heirloom varieties of plants around, and Lisa can tell you all about them. I was given a cutting of a “walking onion” which self-plants every year with tiny bulbs growing right off the scape (I happily transplanted it to my back yard where it is on its second generation of bulbs). I also took home a glorious chocolate mint, a robust lovage, some summer savory, garlic chives, and some chervil.
One thing I have always wanted is a water-plant pond in the yard. Unfortunately, it has not happened yet. Up at Preston they’ve run a small fountain into a wine barrel which then slowly seeps out to water the lower parts of the garden. Inside and around the barrel in the wet parts? Watercress. 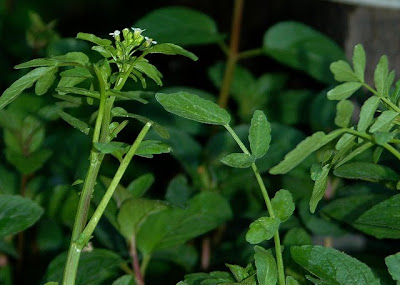 Oh boy do they have watercress.
I am so jealous. Now I want a barrel (in which I will also grow water chestnuts).
Rick was back up at Preston last weekend playing music and hanging out with Lisa and Edwin (she’s teaching him how to hunt and use a chain saw – she is SO COOL), and he came home with not only a GIANT bag of fresh watercress, but this gorgeous soup recipe, courtesy of Edwin. 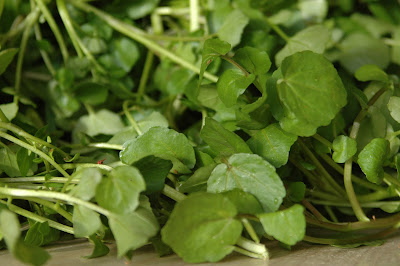 This soup is equally hearty and refreshing. The peppery taste of the watercress blends gorgeously with the ginger and garlic, and is cooled down a bit with the cream. It would even stand to be bacon-ed, I’d imagine, and I may be trying it that way later today (after all, I still have a mound of watercress to use). I will be rendering the bacon down for the soup and garnishing with the cooked bacon pieces at the end.
Having not really had much family growing up, I feel so honored to be the recipient of all of this knowledge and to be a new care-taker of all these wonderful plants with such great history. One of these days I’ll get back up that way and repay the favor with a whole pile of canned goods and maybe even a recipe or two of my own.
And knowing Lisa and Edwin, I’m sure I won’t leave empty-handed.
Cream of Watercress Soup
3c watercress (packed – otherwise, enough to loosely fill your stock pot about half way)
1 large yellow/white onion (or an equal amount of shallots), peeled and chopped
1-2 cloves garlic, minced
1″ knob of fresh ginger (about 2 tsp) grated
2 Tbsp butter
3 c broth (chicken is ideal, but veg would be fine)
1 c white wine (not too sweet – I used a pinot grigio because it was already open)
1 c heavy cream
1/4 tsp cinnamon
1/4 tsp paprika
salt and pepper to taste 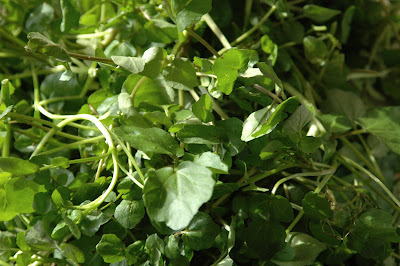 Pick through the watercress, and rinse thoroughly. Stems are OK, but our watercress had several other water plants growing near it (including a chocolate mint), so removing the non-watercress plants was essential.
Sweat the onions, garlic, and ginger in the butter until soft (but not browned) in the bottom of a large stock pot. Add the watercress and cook until limp. Adding about 1/2 c of chicken stock, process the watercress mixture until smooth with either a stick immersion blender or a stand blender/food processor. 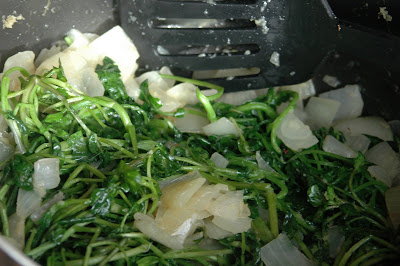 Move the puree back to the pan, and add the white wine, simmering and deglazing the pan for a few minutes. Then add the rest of the stock, and season to taste with the cinnamon and paprika, as well as some salt and pepper.
About 5 minutes before serving, pour in the heavy cream and mix until the whole soup is a creamy consistency (this soup can be thickened with a cornstarch if you like, but certainly didn’t need it when we made it).
Alternately, it would be fabulous with some potatoes cooked down and pureed for texture and thickness.
Serve this soup with a few picked leaves of fresh watercress and a small swirl of creme fraiche or sour cream…or even some shavings of parmesan or asiago. 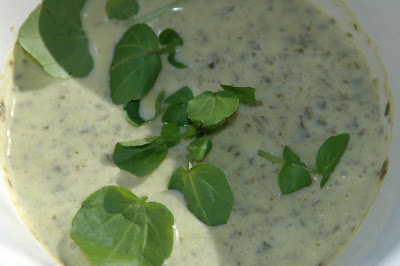 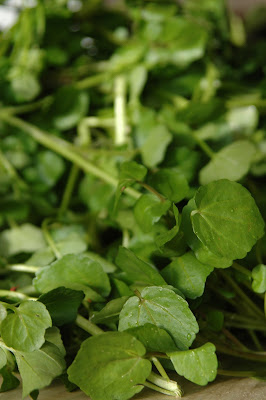 One thought on “Cream of Watercress Soup”