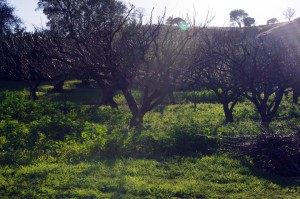 A well trained tree when young makes for easier pruning. These are apricot trees at Sunny Slope Orchard.

A great orchardist once told us that when pruning fruit trees it doesn’t matter how many fruits the tree produces if you can’t reach them. Proper pruning is important to train the tree into the correct form so the fruit is not only reachable but also so that the structure is open bringing light to the inside of the tree and allowing air circulation so that there are fewer diseases.

I’m not even close to being an expert on pruning but I do know the basics and since some of you may have some questions, I figured I should share at least what I know. For more in depth information on pruning there are many classes offered in the winter (check your local Cooperative Extension or nursery) and there are books you can pick up. I use an old buck written in the 1940’s called How to Prune Fruit Trees. Unfortunately it doesn’t look like it’s in print anymore.

Pruning is best done during the dormant season (winter for most trees). You can also prune during the summer but it should be more limited. A benefit of pruning in the dormant season, especially with deciduous trees, is that you have a better view of the trees structure as it’s not hidden behind leaves. Pruning during dormancy also invigorates the tree but it can also cause excessive growth such as water sprouts, which should then be trimmed out as soon as they appear. Pruning in the summer should mostly only involve thinning cuts. I’ll go over the different cuts below.

Thinning cuts – These cuts remove the entire shoot back to the shoot it’s coming from. The first ones that should be removed are dead and diseased wood and crossing branches. If you have diseased wood, dip your pruning shears in a bleach solution between each cut so as not to spread the disease. You don’t want branches touching each other because they can rub each other causing injury which can allow diseases and pests to enter the tree. Also remove branches that are hanging low – a crotch that is greater than 90 degrees. Other thinning cuts will depend on the type of tree it is and it’s structure and how it should be trained.

Heading cuts – These cuts remove the terminal bud (the tip of the branch). They make the tree send energy to produce more side shoots from the branch. This can be beneficial because it produces a stronger branch that is more rigid.

Bench cuts – These cuts remove the vertical shoots which opens up the center of the tree and makes it outward growing. These should be done sparingly as they are major cuts.

As mentioned previously the type of tree dictates how much pruning you will need to do. Peach trees prefer a hard pruning by removing 50% of the previous year’s growth. Pomegranates also need hard pruning to keep them from turning into shrubs. On the opposite side  of the spectrum citrus trees shouldn’t be pruned much except for keeping branches from touching the ground.

Pruning isn’t something to be afraid of but it’s also something you need a bit of knowledge to do. Pick up a book, talk to arborists or orchardists or take a class.

One thought on “Cutting Off a Limb – Pruning Trees”