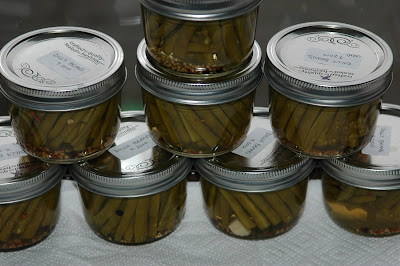 I know, I know. I’ve been waving this one around for months now, making references to how I’ll eventually get it together and post about those glorious little snacks, the dilly beans. It’s not that I wanted you to suffer, not that I have some sort of sneaky deal with the bean growers – they’re not paying me off to wait until the bean season is pretty much over and prices go up again.

It is much more simple than that. 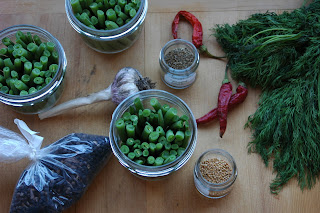 Truth is, I don’t HAVE a recipe for dilly beans. There, I said it. I make them up EVERY time.
Yes, I have a few cardinal rules: I always put in more vinegar than I think is prudent (most recipes are too mellow if I follow them exactly; I like a zingier bean). I sugar the brine (weird, yes, but I do love me some of that glorious sweet/salty/spicy combo. Spicier is always better (unless I’m making them specifically for someone who likes them mild, of course). Mustard seeds are AWESOME. Garlic infuses better when the cloves are not whole. Water bath processing for too long makes them mushy.
Other than that, though, I pretty much just call up some silly online recipe that sounds “about right” and I fake it. And they always come out OK.
So there you have it, folks. The secret’s out: there is no magic dilly bean recipe passed down through generations (besides, I’m pretty sure it’s far from being a Puerto Rican recipe). That said, this time I actually got around to writing down the basics of what I do, which I will gladly share with you today. Why? Because I said I would, and because damnit, dilly beans are just SO GOOD. Dilly Beans
(adjustable to any amount of beans, but this batch made 8 half-pints)
A whole mess (2-3 lbs) of green or other summer “string” beans, washed, dried, and trimmed
1 bunch of fresh dill, washed and dried
hot peppers (I like the spicy Thai or Asian ones, fresh or dried), cut in strips or whole, 1 per jar
at least 6 cloves of garlic, peeled and cut in half/thirds
mustard seeds (one large pinch per jar)
celery seed (optional, one small pinch per jar)
whole black peppercorns (about 3 per jar)
4 c apple cider or white vinegar
2 c water
1/2 c sugar
1/4 c salt (pickling salt, if you can find it)
Cut the beans into spears that will fit standing upright in the wide-mouthed jar of your choosing (which you have sanitized according to the national guidelines, right?). Pack them rather snugly into the jars, making sure to wedge down a few large stems of dill and some garlic and pepper pieces while you are packing (divide up the dill, garlic, and peppers so that each jar gets the same amount) . Fill the jar as tightly as possible to ensure the best results.
Add a pinch of mustard seed (up to 1 tsp per jar is fine), 3 peppercorns, a small pinch of celery seed (if you like), and let the bits settle around the beans. 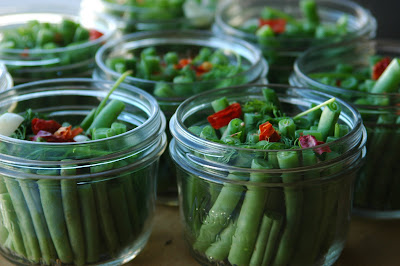 Meanwhile, place the vinegar, water, salt, and sugar in a saucepan over medium heat until it just comes to a simmer. Using a canning funnel to keep the rims of the jars clean (which in turn assures a complete and therefore SAFE seal), transfer this pickling brine into the jars. Leave barely 1/2 inch of headroom per jar.
Seal the jars with new 2-part canning lids, and water bath process the beans for 5 minutes. Allow them to cool before storing. 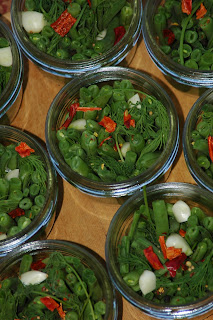 The dilly beans will be ready to eat in as little as two weeks, but they certainly get better over time. I like them about 8 months after canning (the beginning of the next summer, usually) when they’ve really had the time to soak up all the flavors and meld.
These are the BEST camping and hot day food I can think of. I pull out a jar after an exhausting hike or a long day of working in the garden, and they are always the perfect thing.
They pair well with bread and cheese, spicy salami, prusciutto, and fried foods. They’re an awesome side-dish or garnish for burgers or sausages.
They’re a killer late-night snack and I’ve been known to eat quite a few of them when I have a bad case of the drunchies (that’s drunk-munchies, to those of you not so afflicted).
No matter your method of enjoyment, I recommend highly that you try making some dilly beans. Play around with spices that you like (for years I made them without dill as I thought I didn’t like it (ah, the follies of youth – now I can hardly cook without it), and called them “un-dilly beans” or “sweet pickled beans”, depending on my recipe. Whatever your preference, you really ought to try these beans.
After all, you’ve been asking about the recipe for months. 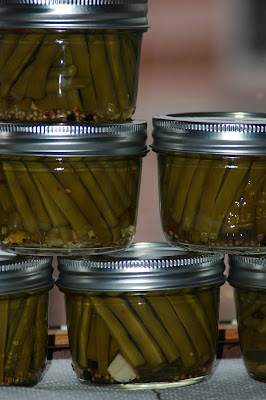