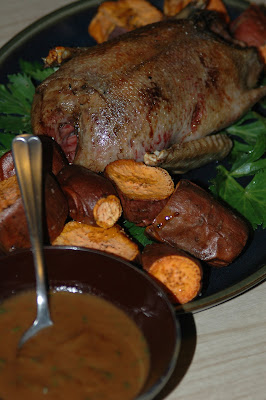 I will preface this by saying that I am not a hunter. Maybe someday in the future I will learn to be more comfortable with guns, but it hasn’t happened yet (right now it makes me uncomfortable to even handle them when they are not loaded).
I’m not even an expert in hunting-and-meat theory: if you want information about hunting, or detailed directions on how to dispatch your livestock, or how to pluck wild game birds, or even how to cook them, I am really not the person to ask (I will, however, provide you with a few links I think are worth taking a look at – I’m pretty handy at research).
That said, I am fortunate enough to be dating a skilled hunter/fisher, who provides me with beautiful and delicious wild game to cook with. For now, this is good enough for me.
It is very important to me to know where the food that I eat comes from, and to know that if an animal is giving its life so that I can eat, it was a happy, healthy life and a humane death. In this way, hunting seems…right. To see the whole process, to know the work and emotion that goes into eating meat is something that resonates with me. Yes, sometimes it’s hard. Though it’s been a long time since my vegetarian years, it is still difficult for me to think that the meat I enjoy requires an animal to die. But I think it’s an important part of the process to feel something: I am a part of the food chain, and being conscious of my place in it can be liberating.
Last week, Rick went out duck hunting. This was an exciting trip out, as he was invited to go with Hank Shaw, whose blog posts about the glories of wild duck have been haunting us (read: causing us to drool on our keyboards) for some time now. I will admit that I know very little about cooking wild game – though I am skilled at cooking duck (this fried rice recipe is pretty awesome and I make a great Duck a L’orange), all my experience has been with the fatty, mild-tasting domestic muscovy.
Hence, most of what we did here was what Hank said to do. Then, one can really never go wrong listening to his food advice, so…I suppose this was a good course of action.
First, we cleaned the ducks. Or, I should say, Rick cleaned the ducks. I was stuck at work and he had to do it alone (when I got home, all the hard parts were done, and he’d already cleaned the kitchen! What a guy).
The livers, gizzards, and hearts were set aside, and all the other inside-bits were discarded.
First, the organs: the gizzards needed to be cleaned, removing the hard “grinders” and the silverskin that surrounds the actual meat. These were then sliced thin, along with the hearts, and flash-fried in a cast-iron skillet with a bit of duck grease for only a few seconds per side. Served with some fresh wild watercress and a balsamic vinegar reduction, they were quite tasty! The crunchiness of the gizzards and the softer texture of the hearts (which were not rubbery at all) were a good combination. 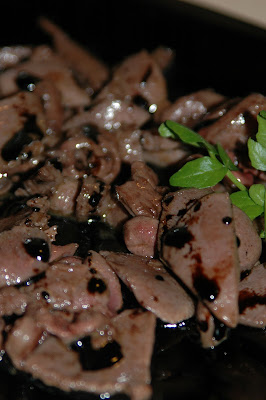 We were lucky enough to have gotten one pintail whose liver had been over-fatted to the point where it was wild foie gras (read Hank’s post about wild foie here). The others were a variety of colors, ranging from somewhat fatty to very lean and dark. These were fried up (again only a very quick sear on each side) and eaten on whole-grain sourdough toast. It was fascinating to taste the differences in the livers of the different birds – all of them were exceptional! 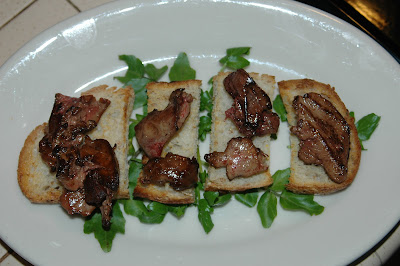 The duck, after being meticulously plucked, was seared on all sides in the same cast-iron skillet on high heat until the skin was crunchy and browned. It was then (following Hank’s directions) placed on a bed of new, young celery (from the garden) in a baking dish, and cooked at 550 degrees for about 15 minutes (until it reached an internal temperature of 135 degrees). 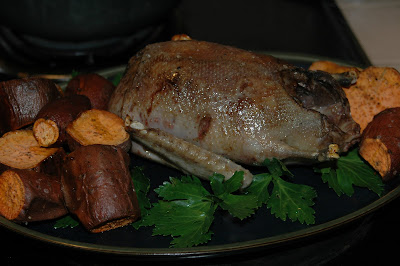 The meat was succulent and moist and still a little on the rare side, which is just how we like it. The drumsticks did require a bit more cooking time, and we wound up finishing them in the skillet. 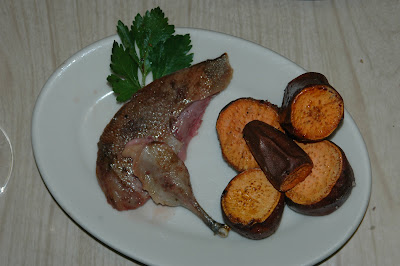 The cooking juices were thickened up with a bit of flour, some Worcestershire sauce, some lemon juice, some homemade vegetable broth, and fresh-chopped parsley to make a quick sauce.
Served with some simple baked sweet potatoes (400 degrees for about 20 minutes), this duck was exceptional. It reminded me how important it is to know where my food comes from, to see the process, to be involved in the food that I eat. I felt something, eating this meal, that I hadn’t really thought about in a while: I felt grateful. 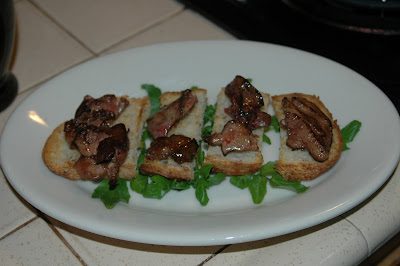 It is a good thing to be grateful. 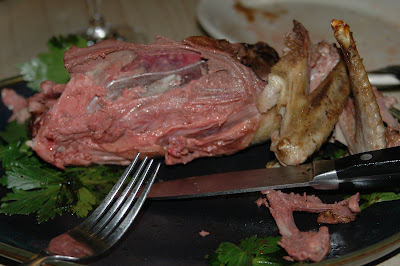 One thought on “Everything But the Quack: Roasted Wild Duck”