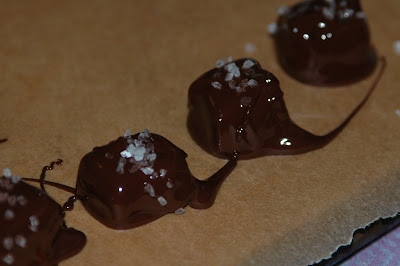 Last year I ill-advisedly picked up on one of those “the first 5 people to comment on this will get a hand-made gift from me” kind of memes floating around facebook. The caveat, as is often the case with these things, was re-posting it on YOUR page, thus continuing the cycle of gift-making.
Right. 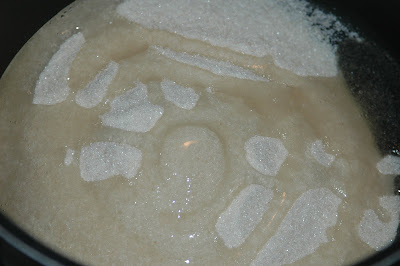 So I posted it. Because I somehow thought I’d actually follow through and make something “before the end of the year” and send it out to those lucky 5 people, and wouldn’t they be SO PLEASED!? I mean – come on – this isn’t just a hand-made thing by anyone. I’m an ARTIST. 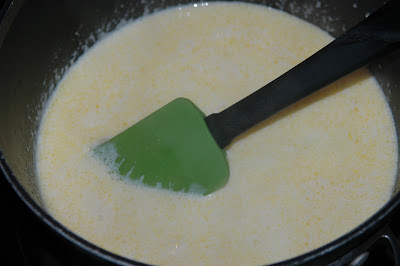 Ahem.
So, bursting to the gills with ego and self-proclaimed benevolence, I immediately signed up for all sorts of other folks’ stuff and then promptly forgot all about the project. 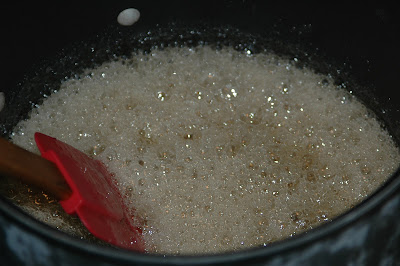 That is, until I got a call from a friend of mine, asking if I was home, because he owed me something and wanted to drop it off. I couldn’t for the life of me think of what he could possibly owe me, but agreed that yes, I would be home in 20 minutes, and he was welcome to come by. I wondered what it could be? Was it my birthday? 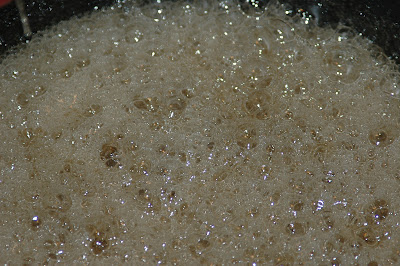 And then I panicked. I remembered that stupid meme. Oh boy, I was a bad friend. I didn’t even remember which 5 people I’d promised gifts to, and though I know that facebook saves everything posted on it FOREVER, the odds of finding that post again seemed slim (let it never be said that I am unapologetically flaky. In fact, I will beat myself up and tilt into ever-widening guilt-spirals if given half the chance. Especially about art projects). 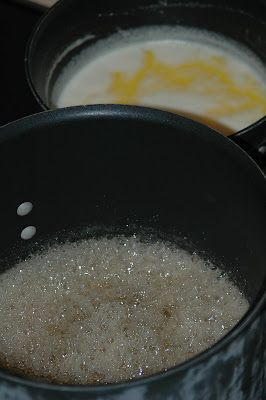 I paced. I made tea. Maybe he wouldn’t ask about MY gifts if I kept him busy. “I know – I’ll show him the garden! The chickens! YAY chickens!” I said to myself. 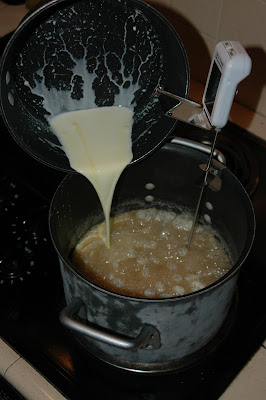 The doorbell rang. Leigh and his daughter Genna came in, hung out with the chickens, and then handed me a tiny box. A box full of THE BEST SALTED CARAMELS I HAVE EVER TASTED.
I don’t remember if they asked me about my gifts. I probably told them I was a horrible flake and hadn’t done anything. I was beyond caring. I was lost in a world of delicious caramel-y goodness the likes of which I had previously believed were unachievable. Unless they were magic. 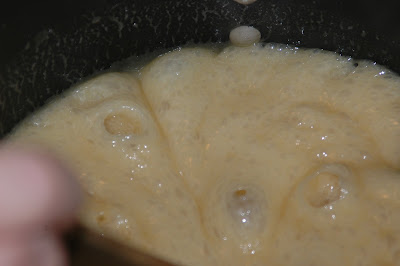 It’s possible I actually asked if the caramels were magic. The rest of the visit was kind of a blur. 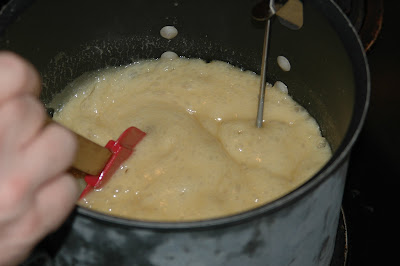 This year, when I was thinking about what I would like to make to give to my friends and loved ones during the (insert special winter celebration here) holidays, these were the first things I thought of. I called up Leigh and Genna and asked them if they would prettyprettyplease with fleur de sel on top teach me to make salted caramels, and they gladly agreed. 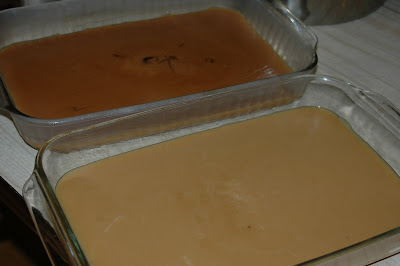 Turns out there’s not much to them, once you get the proportions and the science down. Yes, they take some time to make. Yes, they make a bit of a mess, and YES, hot sugar is equal only to MOLTEN LAVA in it’s powers of burning and making things (fingers, ahem) hurt. Yes, this process takes LOTS OF HOURS. But they are so oh-my-god-I’ve-died-and-gone-to-heaven-and-not-even-the-normal-heaven-but-a-special-heaven-just-for-foodies good that it’s worth any amount of work. 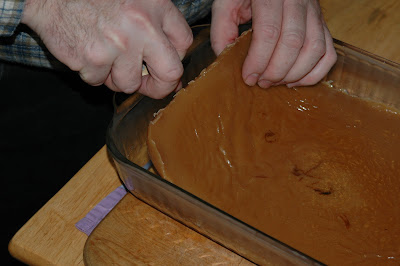 Heck, I might even send some to those 5 folks on my list. If I can ever remember who they were. 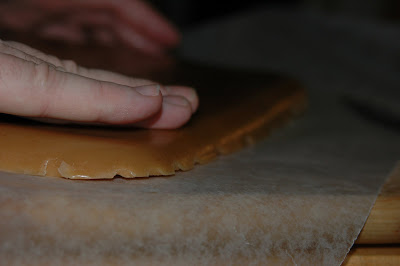 (aside from the food ingredients, you will need several pans: one sauce pan for heating the cream and butter, one big high-sided pot for boiling the caramel, and a double-boiler for tempering the chocolate. A saucepan with a heat-proof bowl on top can be a fakey double-boiler in a pinch.
You’ll need a large pyrex (or other non-stick) casserole or cake pan, roughly 11″ x 15″, buttered completely on all inside surfaces.
You will also need a candy thermometer, a heat-resistant rubber spatula/whisk, a roll of wax paper, a roll of parchment paper, and a long chef’s knife with a sharp edge.) 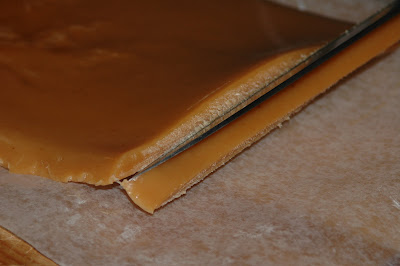 foodstuffs:
2c heavy whipping cream
10 Tbsp butter (plus more for buttering the pan)
2 tsp sea salt (plus more for sprinkling on top)
3c granulated sugar (I used organic evaporated cane juice)
1/2 c light corn syrup
1/2 c water (a little more or less depending on the humidity where you’re making them)
dark chocolate (we went through a little over one large bar, which was maybe 2 or 3 cups when chopped)
In a large, high-sided pan (I used a large stock pot), mix the sugar, corn syrup, and water…keeping in mind that higher-humidities will need slightly less water than called for in the recipe. Once the ingredients are incorporated, place them over medium heat to start melting together. 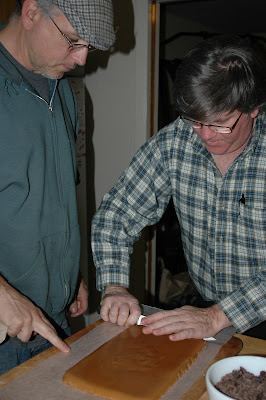 Meanwhile, in a saucepan, melt the cream, butter, and salt together and bring to a boil (remember that the cream will increase in volume dramatically when boiling – consider this when choosing your pans). Remove the pan from the heat and set it aside until needed.
The butter and cream will separate somewhat as this mixture cools, but that’s OK – the violent bubbling in the next step will assure that everything incorporates fully.
**Make sure at this time that you have prepped your pans for the caramel to set. You want something with a wide, flat base that is heat-proof (no plastics) and sturdy (will not warp). Large pyrex/heavy glass casserole dishes or cake pans are ideal for this. Coat all inside surfaces with butter and make sure you do not miss any spots – the caramel can get pretty sticky.**
Once the sugar mixture comes to a boil, keep an eye on the color: you want a deep amber, but there’s a fine line between golden-brown and BURNT. Do not cross that line. You’ll notice that at a certain point, the bubbles will change size and consistency somewhat (bubbles will be bigger and seem thicker-walled). This is a good sign that you’re getting close.
Once you have reached a good golden-brown color, it is time to add the cream. Be careful here – the mixture will easily triple in volume as it boils away the water in the cream, and is molten-hot. NO TOUCHY. 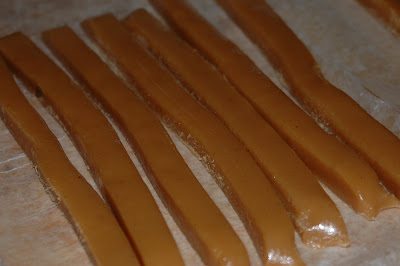 Now’s the time for your candy thermometer. You want this mixture to boil until it comes to 248 degrees (if it is very cold or wet outside, you can take it up a few degrees higher. On the night we made ours it was raining and very cold, so we took it to about 253).
Pour the mixture into the buttered pans and allow them to cool. If you are in a rush, you can cool them to where they are cool enough to handle on a counter, and then pop them in the fridge or freezer to speed up the cooling process. 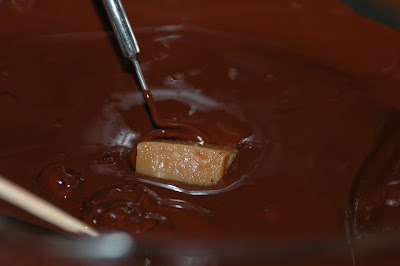 Ours took about 2 hours to completely set.
Once the caramel is set, you can turn the whole slab out onto wax paper. You’ll generally need to pry it up with a butter knife or an icing-knife, but it’s not too hard to extract once you get it going. Smooth out any gashes from errant knife-slippage, and then cut the caramel into 3/4″ squares. 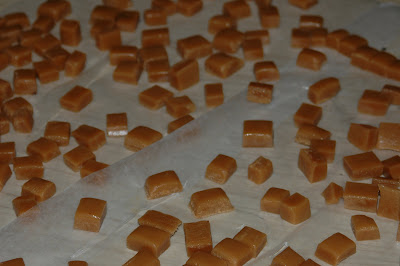 **Note: we discovered that having two long chef’s knives in a vase of hot water is KEY here, because you can use one until it starts to stick to the caramels, then trade out for the other heated one. Lather, rinse, repeat. **
If you do not know how to temper chocolate for dipping, there are many good methods online. We followed these instructions and were very happy with the results (because David Lebovitz is a genius and everything he does is wonderful). Basically, you have to heat the chocolate, then cool it, and then keep it within a temperature range where the crystals set in the proper way to get a hard coating that is shiny and solid at room temperature. 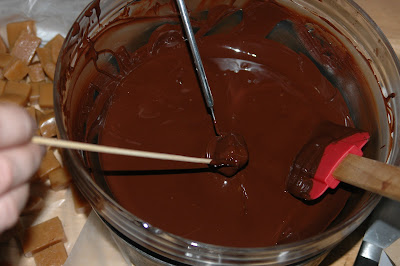 Once you have tempered your chocolate, you can start dipping your caramels. Leigh brought over some chocolate tools he got for cheap at the craft store, and they were fabulous…but I think a spoon and some chopsticks would do fairly well.
Once the caramels are coated in chocolate, set them out on parchment paper and sprinkle with just a bit of fleur de sel (Leigh spoiled us and brought some he’d bought in France!), and set them to dry for at least a half hour before eating. 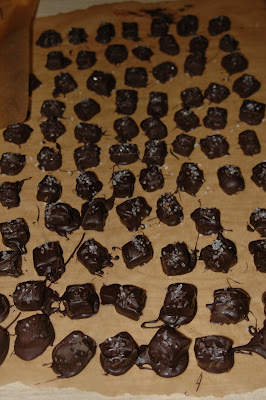 …Right.
TRY to leave some to dry all the way?
This recipe makes several dozen caramels, which is enough to keep some and share some. We made a double-batch and they covered the whole kitchen table! 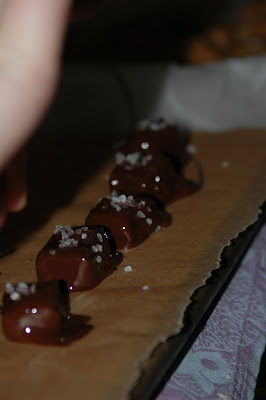 Now the trick is how to stop EATING them.
THINGS I LEARNED:
*Making caramels is hard on the back, the hands, and the waistline.
*it takes for-freakin’-EVER if you want to make enough of them to have around for a bit.
*there IS such a thing as too much salt. Some of the pictured caramels had to be brushed off to be fit for consumption. A light touch is good, here.
*I do not, despite being told that I would, get tired of eating these.
Help. Please. 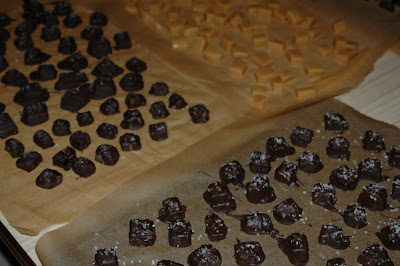