| 3 Comments
It is turkey season again! 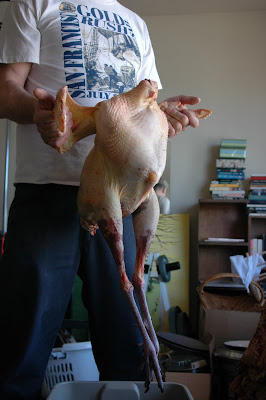 Rick’s already been out once, bringing home a gorgeous 27 lb tom (cleaned and plucked, it was about 17 lbs of edible bits). We cleaned and froze the breasts, wings, and drumsticks for later meals, and made Hank Shaw’s Wild Turkey Marsala with the scrap bits from the breaking-down process. The carcass and any wiggly-bits (fat, cartilage, etc) went into a stock pot and were simmered down to a rich, hearty broth that we condensed for future risottos, soups, and gravies (it’s sort of like boullion, but liquid – we freeze it in ice cube trays for easy use).
Aside from being turkey season, it is also very much SPRING here in the city. The garden is starting to thrive; sending out new shoots of green everywhere, and forming visions of salads, soups, and stir-fries in my mind every time I walk out the back door. Our winter-planted broccoli is heading, the carrots are finally bulking up, the fennel is producing lovely bulbs, and there are greens, greens, greens for days, days, days. Mustard and kale and beet and chard and collard, as well as spinach, lettuce, arugula, and cabbage. 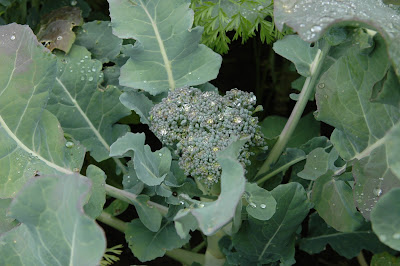 I got an email the other day from my band mate and cooking buddy, Alanna, who said her boy was feeling under the weather. It’s hard enough to be sick when it’s grey and hazy outside, but feeling awful when it is finally sunny and beautiful out…well, that’s just not OK. I was heading over to their house later that evening for practice, so I thought I’d see what I could do about a get-well soup.
I started out with a basic recipe in mind: a spicy and sweet beet/garlic/veggie soup I used to make all the time when I was in high school. I was a singer then, too, and needed a good throat-soothing hot broth and LOTS of vitamins for the (inevitable) malaise that always seemed to strike the day before a big competition. And hey – I’m not a vegetarian anymore, so why not throw in some of that delicious wild turkey?
A trip out to the garden supplied some early green garlic, a bulb of fennel, some broccoli tips, a giant golden beet (with greens), a few carrots, some ribs of new celery, and a giant bouquet of kale. Sounds like soup to me!
In retrospect, I should have made about ten times as much, as it was well-received by both poor sick Jay AND all us healthy folks who were eating it proactively. Hey, who says you have to be sick to eat healthy soup? I will certainly be making this again soon!
(note: this is a very fast-and-loose recipe. You can make it with veggie broth if you’re not into the whole meat-thing. Use whatever vegetables you have on hand. The only things I’d make SURE to include are the beets, garlic, soy sauce, and the spice: either hot pepper flakes or a sauce like Tiger Sauce…even Tapatio will do just fine in a pinch. If you’re not sure on how to make your own chicken/turkey stock, Michael Ruhlman’s method is simple and pretty fail-proof. You should also read his hilarious article on roasting a chicken, which is linked on that page.) Get-Well Turkey and Garden Vegetable Soup
about 8-10 c broth (I used 1/2 wild turkey broth and 1/2 veggie broth that I’d made with kitchen scraps the week prior)
1 young (not headed yet) green garlic, cleaned and chopped
3 cloves (regular) garlic, sliced or crushed
1 bulb fennel, cleaned and sliced thin
1/2 large yellow onion, sliced into thin half-rings or diced
1 large head broccoli, or about 1 1/2 c of florets, cut into manageable pieces
2 ribs of celery, cleaned and sliced
3 large carrots, sliced into rounds (about 3/4 to 1 c)
1 very large (or a few small) beets, peeled and cut into 1″ chunks. I like golden beets here, because they don’t turn the soup BRIGHT PINK. Save the greens to add in with the kale at the end.
1 c sliced mushrooms (I used buttons, but crimini are ideal, texturally)
1 bunch kale, cleaned and cut into pieces/strips. Something manageable.
3 Tbsp (ish) soy sauce, more if you like it salty
1 dash hot sauce (I like Tiger Sauce best for soups)
1/4 c white wine, if you have it on hand
1 tsp dried sage
1 bay leaf
If you’ve made your own stock, strain out any bones or cooked vegetables, and return any remaining meat on the bones to the pan with the broth. If you don’t have 10 cups, add some water. Again, this is an anything-goes kind of recipe. Make it to fit the size pot you want to cook in. Don’t sweat it. This soup is supposed to make people HEALTHY – not stressed out.
Bring the soup to heat, but do not boil it.
Prep all the vegetables, and add them into the mix according to cooking time, and how soft you like them to be: First, put in the beets, onions/clove garlic, and any other roots or tough/stringy ingredients. Let this cook for a bit, and then add the carrots, celery, and fennel. Finally, put in the broccoli and the green garlic. Also add in the sage and bay leaf, as well as the soy sauce/hot sauce/wine. Let this cook until the beets and carrots are cooked to your liking (about 45 minutes?), and then remove the soup from the heat.
Don’t forget to fish out the bay leaf!
Finally, shock the kale and beet greens into the soup. You want them soft and cooked through, but not falling apart – the residual heat from the soup is plenty to accomplish this, and will leave them a vibrant, healthy-looking green.
Give the soup a final taste, and adjust for acidity/salt/spice with more soy, hot pepper flakes, or a dash of red wine vinegar or lemon juice as you like. 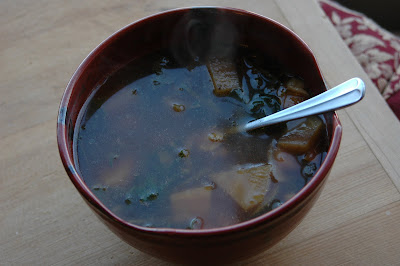 Serve this on its own, or with a hunk of crusty bread (preferably smeared with some tasty brie).
Delicious.