For as long as I could remember I’ve hated tomatoes. Raw tomatoes to be exact. We harvest hundreds of pounds of tomatoes every year and I can’t stand them. I like salsa fresca but it has to be blended almost smooth for me to eat it. If it’s got chunks of tomatoes I avoid them. So one would assume that I never was a fan of bruschetta. You’d be right – I never ate it because of the chunky tomatoes. 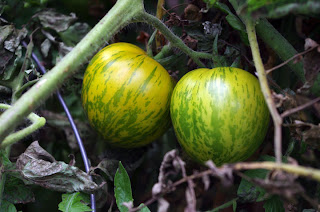 But I’m trying to change that. They still aren’t my favorite things but I’m being more adventurous. Some tomatoes still have this funky metallic taste to me but I’ve found that some varieties are OK and with the right accompanying ingredients they can be downright tasty.

Two Fridays ago we went over to Esperanza’s house for dinner. She served tomato, basil and mozzarella on crostinis and I really like them. Heidi and Ute also joined us and she made bruschetta with pesto and balsamic dressing. She made a similar appetizer with roasted peppers. These dishes were the inspiration for this one.

This past week we were visiting my mom in Ohio. It was both Tom and I’s first time visiting her there and we really enjoyed ourselves. The first full day we were there my mom hosted a big BBQ with her friends and neighbors. I wanted to make something for it and with her fabulous vegetable garden (hot weather plants just explode there!) I wanted to make something that featured some of her fresh garden produce. 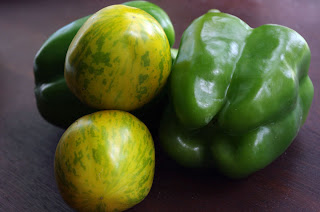 Her tomatoes were perfectly ripe and she had some enormous bell peppers and the biggest plants of basil I’d ever seen. I saw her Green Zebra tomatoes and knew I was going to start there. At first I started picking red peppers and then thought that if I was going to do a pesto it would be neat to stick with all green bruschetta.
They were a hit and didn’t last long. There was even a group of women standing around them guarding them from any stray husband that might want to try them.
Most of this recipe is not measured out because it really depends on how much you want. The proportions are all by taste. 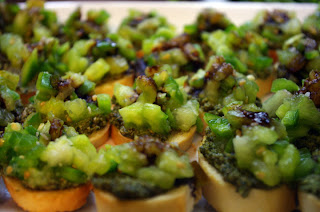 In a sauce pan add 1 cup of balsamic vinegar and half a cup of red wine. Bring up to a boil and then reduce to a simmer until mixture has thickened. Stir occasionally to keep from scorching.

Take 1-2 loaves of baguette, sliced, brush with olive oil and then toast lightly
Finely chop 3 bell peppers and a couple of pounds of tomatoes and mix together.

For the pesto
In a food processor add 2 or 3 handfuls of basil leaves, 1/4 cup Parmesan cheese, 2 garlic cloves and 1/2 cup walnuts or pine nuts. Start processing and add olive oil until the mixture becomes a thick paste. Add salt to taste.

Mound tomato, pepper mixture onto baguettes. Drizzle some of the vinegar and wine reduction and then sprinkle each one with course salt.

One thought on “Green Pesto Bruschetta”