We were given a slew of green tomatoes. Last week I picked out the ripe ones and made pizza sauce.Now what to do with all the green ones? We did make some fried green tomatoes, but that didn’t even make a dent in them. At first I wanted to make a chutney but a friend of ours gave us some lemons (and some canned items) for helping her cull an injured chicken she had. I love to make marmalade, but it wasn’t quite enough lemons to do that so I came up with the idea to do a green tomato lemon marmalade.

OK, so I have to be honest, I don’t like this marmalade. You do have to take that with a grain of salt though because I don’t like tomatoes very much. For the most part it does actually taste good, but for me I get this really strong zinc taste from it. That same taste you get when sucking on a zinc lozenge when your sick. No one else that’s tried it can taste zinc though. They all really like it, so I’m posting this because you can’t take my word on it.

You will need a couple of specialized tools to help speed things up. First, you’ll need a food mill. Otherwise you can seed and skin the tomatoes the old fashioned way. Also, I highly recommend getting a zester for the lemons. This really helps making long, thin strands of zest for the marmalade. Otherwise you’ll need to carefully cut the zest away from the white pith and then slice it really thin. You don’t want to include the white pithy part of the peel because that is what will make the marmalade bitter.  Oh, and now that I’ve got myself a candy thermometer I can’t believe I went so long without it. So get one if you plan to make a lot of preserves.

1. Half or quarter the tomatoes and throw them into a pot. Bring them to a boil and let the tomatoes cook down. Once they are soft run them through a food mill to remove the seeds and skins.
2. While it’s cooking down, zest your lemons, cut off the white pith and outer membrane, and remove the pulp from the membrane (supreme).
3. Add everything together and then measure out how much you have. Add the sugar.
4. Cook down until your preserve has reached the gelling point at 220 deg F.
5. Ladle into sterile jars and process in a water bath canner for 10 minutes. 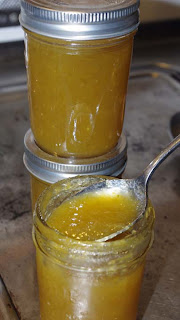