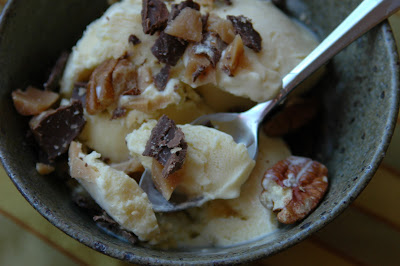 Yeah, I know. If you’re here in the Bay Area, you might think I’m a madwoman for posting about ice cream. But hey – it’s JULY. It’s SUMMER. And even if there is water falling from the sky and a chill in the wind that I can feel INSIDE MY BONES, I am going to make ice cream, and I’m gonna eat it.
…I’ll just be eating it over a hearty rhubarb cobbler or a steaming hot slice of olallieberry pie, is all.

I was always afraid of making ice cream. So afraid, for a time, that I didn’t even attempt to make it, and stuck to warm desserts. The oven was a machine I understood. Those hand-crank things with all the salt and ice and achey muscles? Yeah, I remembered doing that in girl scout camp. But who would want to go to all that trouble when SF has some amazing local organic ice cream already made? 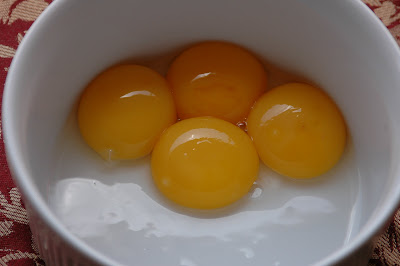 But then about a year ago Rick bought me an ice cream maker (with freezer bowls and a motor – no hand-crankin’ for me) after I’d spent a solid week watching Iron Chef and drooling over all their strange ice creams and sorbets. Because what I needed more than anything is another kitchen gadget, obviously.

Much to my dismay, my general laissez faire attitude when it comes to recipes DOESN’T WORK with ice cream. Cutting out the fat, or the sugar, or adding in something strange (like subbing yogurt for cream) makes the structure go all wonky and the resulting texture is unpleasant. Ice cream has rules, and I’m not so good at rules.

SO I went to the expert: Alanna of Bojon Gourmet. She’s been making desserts for like, ever and I don’t know if I’ve ever had an ice cream of hers that wasn’t stellar. So I asked for help. I brought over fresh eggs from the chickens, and we picked up some cream, and got to work. 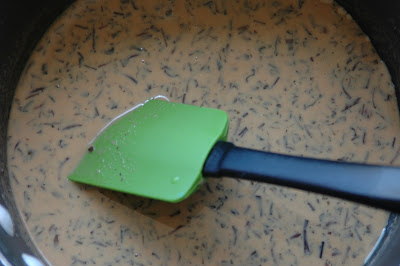 That day we made Earl Grey ice cream with honey. The base has to sit in the fridge overnight to chill before it’s run through the machine, so I didn’t get to try it right away, but the ice cream that came out of the machine the next day was perfect: thick, creamy, just the right amount of sweet, just the right amount of bitterness from the tea…I was hooked.
Over the course of the next month, I made Alanna’s mint chip ice cream recipe with fresh mint from the garden, as well as a chai ice cream with diced candied ginger, a caramelized fennel seed ice cream (which was AMAZING and I can’t wait until the fennel seeds are in season again), some rockin’ fresh vanilla, some spicy ginger root ice cream…and two more batches of Earl Grey. What can I say? It was a winner.
This week I had some extra sour cream and experimented with a sour cream and honey ice cream. Turns out ice cream has rules, but within those rules are a million successful variations. I guess once you know the formula, ice cream’s not so hard after all!
Basic Ice Cream
1.5 c half and half
(3 Tbsp loose tea leaves, or 1 vanilla bean, halved/scraped, or one bunch of fresh herbs)
1 c heavy cream
1/2 c honey (or sugar)
4 egg yolks

Heat 1 c half and half in a saucepan until steaming (but not simmering). If you are steeping a flavor into the ice cream (like tea, or vanilla, or mint, or lavender), mix it into this cup of warmed dairy, put a lid on it, and let it sit for about an hour. Then bring the half and half back up to “steamy”. In a separate bowl, whisk the egg yolks with the honey (or sugar) until fully incorporated. 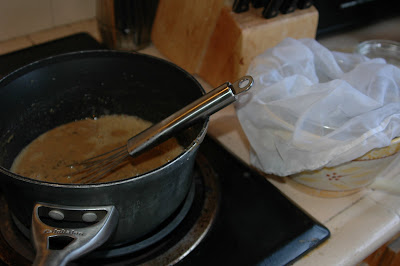 In ANOTHER bowl, whisk the cup of heavy cream with the remaining 1/2 cup of half and half, and store this in the fridge (you’ll want it as cool as possible to stop the cooking of the other ingredients later). Temper the hot half and half into the eggs/honey and then put it all back in the pan and bring it to 170 degrees stirring constantly (or until it thickens just enough to coat the back of a spoon. Alanna says to test it by tilting the pan…if it coats the bottom of the pan a little, it’s good enough). 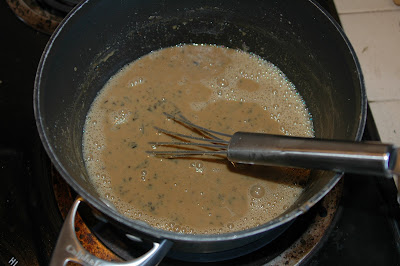 Pour this through a strainer to remove the unwanted bits of tea, etc (it will also weed out any lumpy/grainy parts at all from cooking the eggs – it happens sometimes) into the cold dairy, and stir to combine. Store this in the fridge overnight until it’s fully chilled, and then run it through an ice cream machine like you would any other basic ice cream. Mine takes about 20 minutes to be thick enough to handle. If I am adding nuts or crushed toffee (or caramelized fennel seeds – ahem), I add them at the very end of the cycle, once the ice cream is already thick enough for the bits to stay suspended in the base. 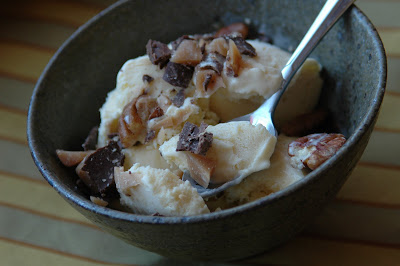 Once the ice cream is thick and aerated, put it into a couple of mason jars (or a big pyrex – something freezer-safe) and let it sit for a couple hours to harden completely before serving.
ALSO: I should also mention that my roommate (of Eco-SF) has been making ice cream base and churning it in a crank-style ice cream maker powered by a stationary bike when they have work days at the school farm. I have yet to take a turn, but I hope to soon!