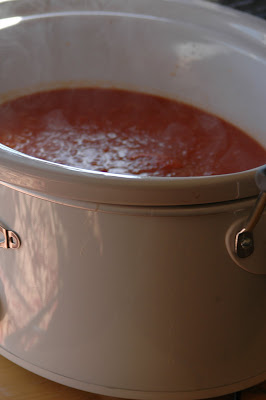 One of the last battlefields in my quest to be self-sufficient has been condiments. 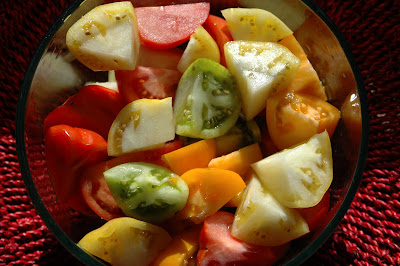 Yes, I can bake my own bread, clean and dress a chicken, or make a kickass batch of Russian tea cakes (OMG – I need to make those again soon!), but when it comes to those little things – the mayonnaise*, ketchup, mustard…relish…well, I always wind up running to the store and buying the brand name. Partially because it “tastes right” – I have never developed the refined palate which tells me that a fresh-made aioli from duck eggs and fresh organic lemon juice is better than Best Foods mayo (at least, not on a sammich-just-like-mom-used-to-make). Also because it is easy (and I am lazy). Also because it is daunting: those sauces have been around for ages, and everyone has specific flavors that we expect to find in something called a “barbeque sauce”, “ranch dressing”, or “cocktail sauce”.
But I’m tired of brand names. I’m tired of not knowing what’s in the food that I eat, and I’m tired of being beholden to a grocery store or a big corporation to make my food taste “good” (read: safe, recognizable, non-threatening). So away I go on a culinary adventure to find home-made substitutes for all those tastes I crave so much. 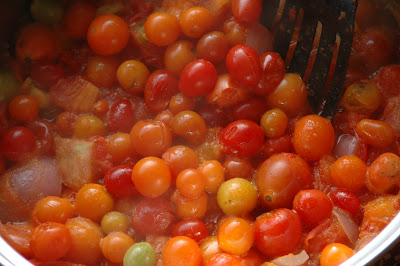 And first on the list (namely because of a mass amount of we-have-to-use-these-now-or-they-will-turn-to-mush tomatoes and a free day off to experiment) was ketchup. A thick, red condiment that (at least in America) contains equal parts salt and high fructose corn syrup, with a touch of tomatoes thrown in for…color? Oh, no, that’s probably dye.
Not this stuff. Adapted from a recipe written by Hugh Fearnley-Whittingstall (of River Cottage fame) and made remarkably simple by using a slow-cooker to reduce it, this ketchup is thick, flavorful, and rich, yet still reminiscent of what ketchup is “supposed to” taste like. 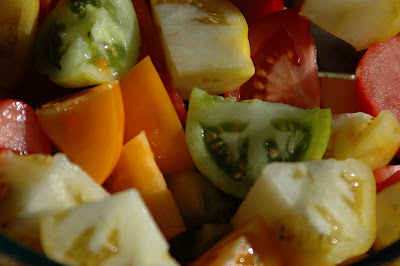 While researching and recipe-testing, I was forwarded this article by my friend Jay (and subsequently by a few other people – I guess it was going around, or was REALLY appropriate for me to be reading), which talks about the plight of ketchup as America’s condiment-sweetheart who, it seems, no one will allow to grow up. Give it a read if you have a few minutes – it’s quite a fascinating look into the history of mustard and ketchup (and the many varied tastes of the American public when it comes to the sauces we deign to squirt onto our oh-so-American hot dogs or pour onto our not-so-French fries).
Anyway, on to MY sauce (which I’d happily squirt onto some home-baked thick-cut fries or serve on a delicious burger on a fresh challah roll)…
Tomato Ketchup
2 lbs ripe tomatoes, roughly chopped
1 large yellow onion, peeled and roughly chopped
1 red bell pepper, seeded and chopped (I used roasted pepper steaks that I had made previously)
1 c brown sugar
3/4 c apple cider vinegar
1 bay leaf (I used California Bay Laurel, which is stronger than store-bought bay)
1 cinnamon stick
1 tsp dry mustard powder
1-2 tsp celery seed
1/4 tsp ground cloves
1/4 tsp allspice
1/2 tsp garlic powder
1/2 tsp paprika
fresh ground pepper and salt to taste 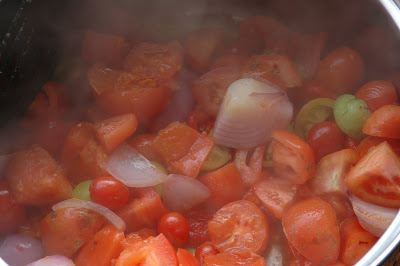 In a large saucepan, put tomatoes, onion, and peppers over medium heat. Allow these to sweat and release liquid until everything is soft and soupy, stirring occasionally so that the bottom does not burn. Add sugar and vinegar, and remove from heat. It is very important that the cooking-until-soft is thorough, or you will wind up with weird slimy onion chunks in your final sauce. 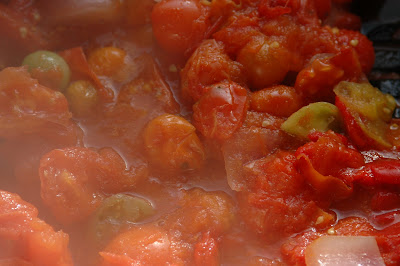 Process with a blender, immersion blender, or food processor until smooth (you may need to let this cool down a bit before you blend, depending on your method of blending. My cuisinart HATES hot things and will spit them at you if you are not careful).
Add powdered spices, bay leaf, and cinnamon stick, and transfer everything to a slow cooker/crock pot (or a non-reactive pan, if you do not have a slow-cooker). Set it to medium or low, and slowly let the sauce reduce until it is deep red and thick enough to make peaks when a spoon is lifted out of it.
Finally, fish out the bay leaf and the cinnamon stick and discard them – they have given all they can. Now it’s time to eat it, or store it! 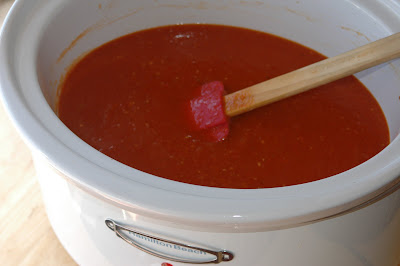 This ketchup keeps for several weeks in the refrigerator, or can be canned (please use safe canning procedures!) in a water bath for 10 minutes at sea level. It will then keep in a cool, dark place for at least 6 months. 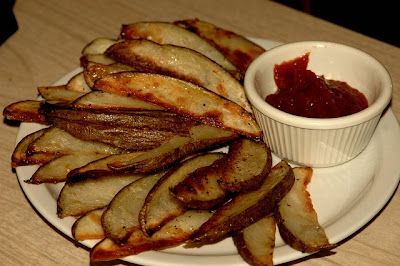 *note: Rachel has a great simple mayonnaise recipe on the site here which I have not personally tried but I’m sure is fabulous. Anyway, it’s next on my list…