This week’s post comes from Erica at Northwest Edible. I’m super excited that she agreed to do a guest post for us as I love all of her posts. She discusses the tough stuff about urban homesteading. 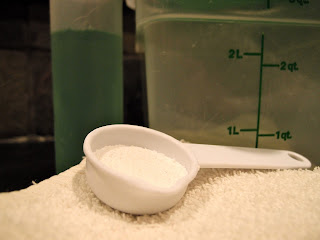 We were unloading the dishwasher yesterday and Homebrew Husband pulled a sparkling wine glass out of the top rack. Forgive me that ad-copy imagery, it irritates me even to write it, but there it is: the night before we had enjoyed wine with friends, and my man willingly unloads the dishwasher.
Nick held the glass up to the light, looked for a moment, and said “The professionals just do a better job with this one.”
Several months ago, we’d made our own dishwashing detergent. It was a combination of baking soda, borax and oxygen cleaner. It worked…sort of. Things got cleanish but a film formed on everything. Once clear glassware was turning grey. Plates had a sort of mottled, streaked look. Our flatware was starting to look like something recovered from a sunken ship.

After a few months (we tried, we really did) we gave up and went back to Cascade. The results were, I’m not kidding, transformative. Before two loads had been run, the glasses were clear, the plates uniformly colored, the knives and forks shiny.

Generally speaking our D-I-Y efforts beat out the B-U-Y equivalent. Our homemade meals and convenience and snack foods are tastier and fresher and healthier. Nick’s beer has basically ruined me to commercial beer (even good craft microbrews) forever. From almond oil moisturizer and vinegar hair rinse to all-purpose surface cleaner and beeswax leather polish, our other homemade cleansers and personal care concoctions have all served us well.

It is certainly cheaper to go homemade, and I’m sure there are a plethora of environmental advantages too, but until we find a better formula, our dishwashing detergent will remain a B-U-Y item.

But our experiment wasn’t a total failure. When DIYing it, we developed a storage system that resulted in much less waste than our old “dump some out” method of filling up the dishwasher’s soap cup. We mixed and stored our DIY dishwashing detergent in a tall plastic tub, and allocated the 1/8th cup measure from our measuring cup set (no one really uses the 1/8th cup anyway) as our detergent scoop.

Even though we are back to the commercial detergent, we kept the plastic tub and measuring cup system, and as a consequence use far less dishwashing detergent than we did before out DIY attempt. We fill the measuring cup a bit shy of full, so we’re using probably 1.5 tablespoons of detergent per load. Our dishwasher’s soap cup holds 1/4 cup, or 4 tablespoons, so this is a substantial savings over the “fill ‘er up and slosh a bit over the sides too” method we had previously employed.

If there is a lesson here, it is to never make perfect the enemy of better. Perfect would be an environmentally neutral homemade detergent. Better is using 60% less of the commercial detergent than we previously did.

There is always something more virtuous, more eco-chic or more happy-hippy to strive towards. Sometimes you aren’t going to hit the bullseye, but just nudging a little closer – by buying less often, or wasting a bit less, or being more thoughtful in your consumption – is a step in the right direction.