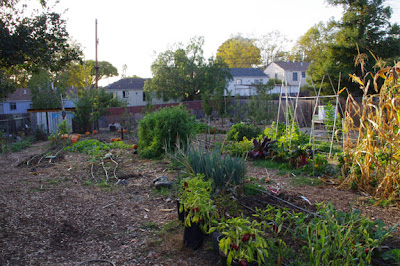 Well, it’s that time of year. Major transitions in the garden are happening. As crops wither they get pulled out. The soil gets renewed with a layer of chicken and goat compost and loosened up a bit before the next crops go in.

The squash and pumpkins are all harvested and getting cured. Melons, cucumbers and beans are gone. So is most of the corn (except for the one last stand of Indian corn that is drying). The tomatoes (big green plants in the middle) are still going strong. Onions, peppers, eggplants, and tomatillos are still going as well. 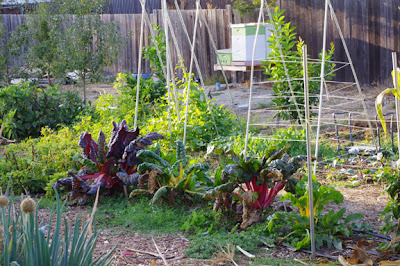 And then there is the swiss chard. I planted it last winter. There are 5 plants left. These are the plants I want to collect seed from, but of course they are REFUSING to bolt. I don’t get it. I just want the seed! Because of their refusal to bolt they are prime candidates for saving seed from, but now it’s just getting ridiculous. 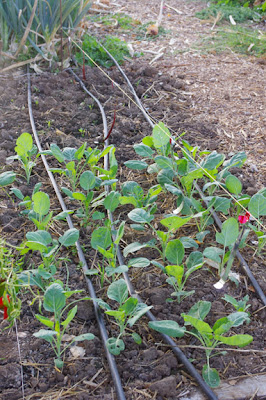 Of course, pulling stuff out isn’t the only thing going on. We’re quickly replacing crops with our winter crops. I’m learning what varieties do the best here. So far the Long Island Improved Brussels Sprouts, Mammoth Red Rock Cabbage, and Giant of Naples Cauliflower are beating out their other Brassica competition. The lettuce is doing well, but the spinach is meh. Runner beans and peas are taking off. Beets and carrots….I just have no luck with them. Well, I have better luck with carrots than beets. I just can’t grow beets. I was able to grow them no problem at our old house. Here – nada. This is surprising because swiss chard (a close relative) does so well here.

So that’s what’s going on here. What is going on in your garden?