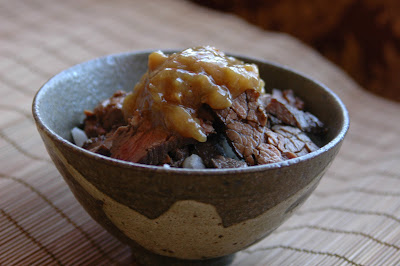 We’ve made many changes in the garden this year. We’ve planted more responsibly; growing what we will actually harvest and eat, and what will produce well in our climate. We’re eating more seasonally now that we are depending more on our yard to provide most of our produce. We’re at a point where we may decide to cancel the CSA box entirely.
We also finally reorganized the back yard, laying out definitive locations for our long-term crops (like tree collard, fruit trees/bushes, artichokes, and…rhubarb!) and everything is in the ground where it belongs. Those changes, coupled with the VERY strange weather, have made this season a bit of a surprise for us. We haven’t been sure what to expect, and have been waiting to see what plants will comply with their new arrangements, and which will need more TLC before they settle in for the long haul.
Some crops (like our apricots) never even fruited this year due to freak rain/hailstorms at just the wrong time. Other crops (like our June-bearing strawberries and our parsnips) are massively prolific, leaving us with bumper crops that we can hardly keep up with! 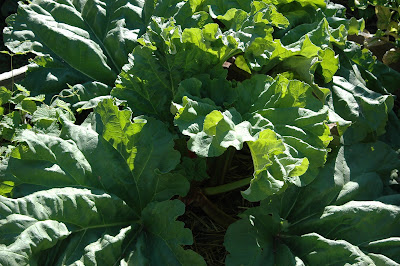 And my darling, much-doted after rhubarb has literally QUADRUPLED in size in the past month.
About a year ago I wrote a post about rhubarb coffee cake, talking about how sad I was that my own little potted rhubarb plant was nowhere close to being ready to harvest. I spoke of the injustice of having to go BUY something that should by all rights come off the plant in the back yard. I can be a little impatient, at times.
The post was also about ridiculous chefs who don’t believe rhubarb is good enough without adding another fruit into the mix, and why that is STUPID (not that I have an opinion or anything). Anyway, you can read about it if you want. The coffeecake is pretty awesome.
Rhubarb is amazing. I can’t ever get enough if it, and it always seems to be so hard to get a hold of. It’s either out of season, or the market only has a little in stock, or it is prohibitively expensive (I kid you not, they were selling rhubarb stalks at the farmer’s market this morning for $6 per lb). 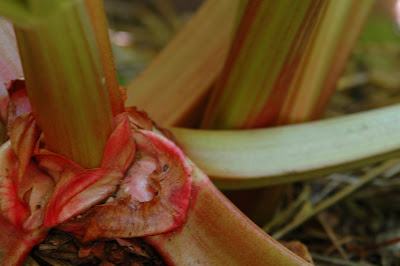 Well, this year, all that changed. 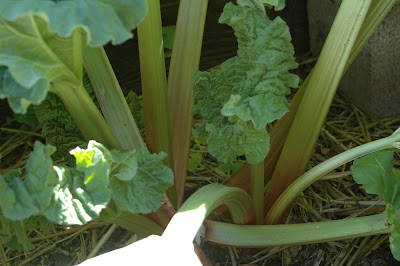 Last week I harvested the first batch of stalks from our very own back yard rhubarb. I was surprised at how much biomass the plant can produce so quickly, with leaves spanning 2 feet popping up in less than a week. Once the leaves were chopped off (the not-stalk parts of the rhubarb plant are poisonous), it was really a fairly modest harvest – maybe about 4 lbs in total – but it was ours. We had grown it ourselves in our garden. I was so excited to give our rhubarb an appropriate “welcome home” in the kitchen, but wasn’t sure what to make. Would I need to share with the rest of the household?
So when my roommate came in out of the garden saying, “Man, someone has to use that rhubarb: it’s going crazy” and then followed with “I don’t really like rhubarb all that much”, I did a little dance of joy. And then I got out the canning pot. 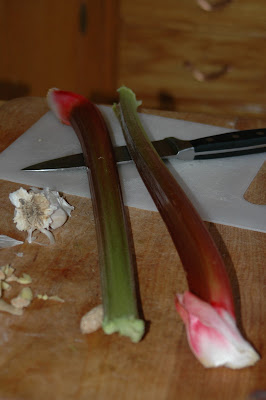 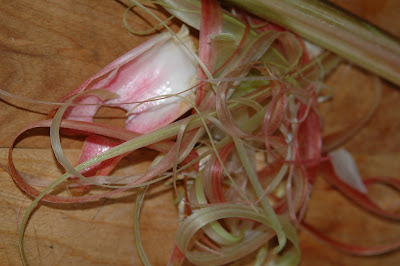 Remove any leaf or root still attached to the rhubarb stalks. Wash the stalks thoroughly, as they can be pretty dusty (especially if you’ve just picked them). Chop the rhubarb into thin cross-sections or cubes. If you find that the stalks are especially fibrous and you’re seeing “strings” as you’re cutting, you might want to peel the stalks before chopping. These strings will pull right off by hand, or can be removed with a veggie/potato peeler. You’ll want to have 4-5 cups of cleaned, chopped rhubarb in total (a little more than one pound). 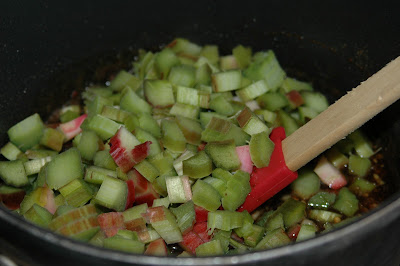 In a large saucepan, bring the sugar, apple cider vinegar, ginger, garlic, and dry spices to a low simmer. Add in the rhubarb and stir to combine all the ingredients. Once the rhubarb is starting to soften, toss in the sultanas and allow everything to cook down until it is thick and the individual pieces of rhubarb have broken down (it will look somewhat like a rustic jam). 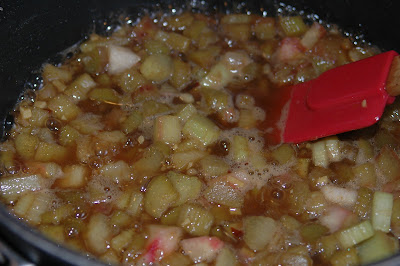 Serve this chutney over…well, anything! We’ve had it over several Indian-inspired dishes, on grilled skirt steak, and over vanilla ice cream. Personally, I can’t stop eating it out of the jar with a spoon. My coworker recently threatened to use it in a peanut butter sandwich. Really, the sky’s the limit. I would imagine it would be especially amazing on pork or lamb, and is *spectacular* served accompanied by a bit of plain, unsweetened yogurt. 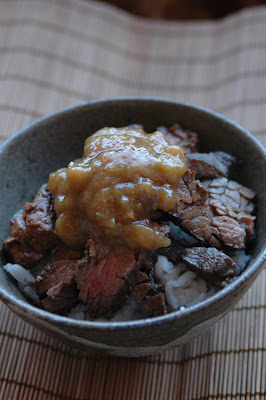 This chutney will keep in the fridge for several weeks. As this is my first time canning this recipe, I can’t guarantee its long-term storage, but I can say that MY jars seem to be doing just fine so far (I water bath processed 1/4 pint jars for 10 min). With the sugar, ACV, and rhubarb, I can’t imagine it is particularly high-risk to begin with – chutneys in general can very well because of this high sugar content and acidity. I’ll report back at the end of the year.

As always, if you are canning, be responsible. Sanitize everything, follow safety guidelines, and store your preserved foods properly.