We came home yesterday after work to carnage. I almost cried. Almost. But I didn’t because deep down inside the demise was a relief. 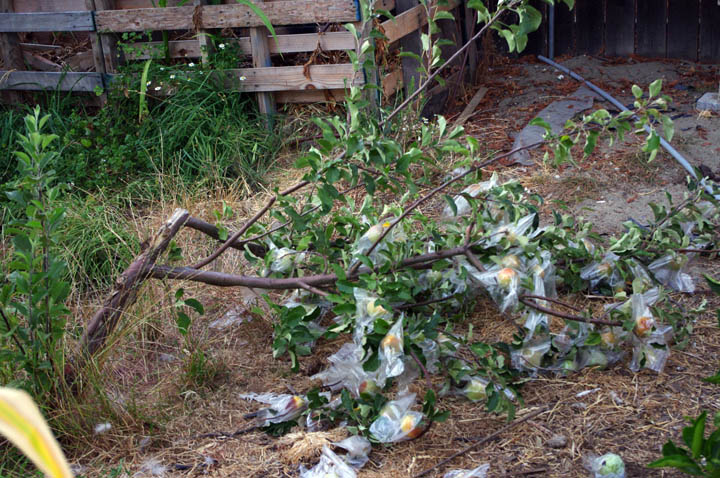 Our Fuji apple tree was dead. Snapped off a the base. It really wasn’t a surprise and was eventually going to happen. Half the tree and thus half of the trunk was killed last year during the heavy rains. Last year I thought it was bacterial blossom blast because the buds died suddenly right after a late frost and weeks and weeks of rain. But bacterial blossom blast is usually not serious enough to actually kill a tree. It definitely wasn’t fire blight, which I’m familiar with. I really hope it’s not oak root fungus (though I think this might be the issue). Whatever it was, it girdled the tree at the base.

Fortunately the root system is still good. There are some healthy suckers coming up from them. Not all is lost! I’m going to attempt to graft new apple varieties to these suckers next spring. I am definitely not going to miss the scion exchange and I may even order some scions if I don’t find what I want at the exchange. One of the reasons I’m happy for this tree’s demise is that since it got diseased last year I’ve been pushing to just take it out. Fuji’s are just so…common. I’m more interested in growing heirloom varieties of apples. Apples that you can’t purchase anywhere except for maybe some farmstand out in the middle of nowhere that has 100 year old trees that the farmer is still harvesting from.

There was once 7,000 named varieties of apples just in the United States alone. Can you imagine 7,000 varieties? That’s incredible. 85% of them are gone now. Extinct. Never to come back. I actually have a tree that’s a graft from an original Johnny Appleseed tree. As far as I know it doesn’t have a name, it’s just a cider apple that’s no good for fresh eating and it’s probably not nearly cold enough here to ever produce fruit, but I’m fine with that because I’m just happy to be able to preserve a piece of history in my backyard. Now I’m off to find what variety I want to plant!