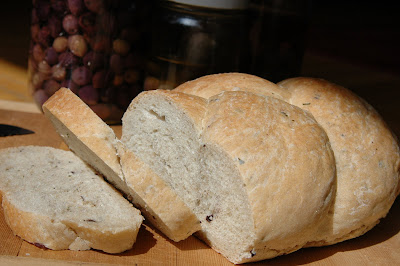 I used to be a picky eater. On my list of foods that were gross? Tomatoes, mushrooms, mustard, pickles (or anything with dill in it), dark leafy greens (especially mustard greens and kale), stinky cheeses, and any kind of olive. Wouldn’t touch ‘em. Which, as you might imagine, meant there were a LOT of types of prepared food that I wouldn’t cook or eat.
I believe to be a good chef and to really work with food, one must understand and appreciate many different flavor combinations. With such a long list of things I didn’t like, I had somewhat crippled myself. So over the past few years, I have set out to remedy this. By growing and harvesting my own produce and hand-preparing my own versions of these foods (as well as having a healthy dose of good old-fashioned stubbornness), I have grown to love these foods, and remarkably, many of them have become staples in my kitchen (2008 was the first year I truly understood the tragedy that is the end of tomato season). 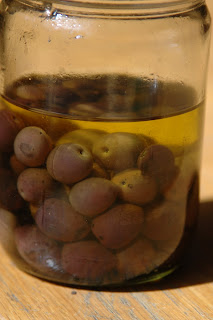 The only food on the above-mentioned list that I still have a hard time with is olives. But I’m working on it.
Last December, my roommate came home with a giant bin full of raw black olives that he and his colleague had foraged locally. After looking up a bunch of recipes for brining solutions, he opted for a basic salt brine: he rinsed the olives, put them in a big jar, and filled the jar with salted water. In April, they were still untouched in the jar. I started to wonder if they weren’t secretly just for decoration – isn’t there more to brining olives than just ignoring them?
My roommate works a full-time job, is taking several classes, and still somehow finds time to run his non-profit. He’s a very busy guy. So I asked if I could take over and see what I could do with them (I promised he’d get to eat most of them, which sealed the deal). Turns out the process is pretty basic.
Over the last month, I’ve separated the soaked olives into several smaller jars (sorted by color – not all of the olives were completely ripe, and the green ones take a lot longer to leach out the tannins, which are what give raw olives their unbearably bitter taste). The salt water in the jars is changed roughly once every 4 days until the olives are ready. This process takes about 2 weeks for the black ones…still waiting to see on the green ones, but they’re getting close.
Once the tannins are leached out, you have a couple of options. You can toss them straight into a jar with some olive oil, you can make a dressing for them with herbs and spices, or you can pull the salt back out of them by soaking them in unsalted water for a few days. 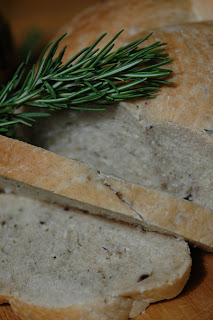 So now I have a whole bunch of olives, is what I’m getting at. So many olives, in fact, that I can now start experimenting with cooking/baking.
I received a giant bundle of fresh rosemary in my CSA box this week (which we already have growing in our garden), and needed to find something to do with it. I took one look at those olives, and I knew: Rosemary olive bread.
Now, 4 days later, I have the third loaf of it in the oven. We can’t stop eating it (plus, it makes the house smell amazing). And I’m eating olives – hooray!
…and hey, at least I used up the rosemary.
Black Olive Rosemary Bread
1 ¼ c water (room temperature)
1 tsp salt
1 tsp sugar
2 tsp dry yeast
375 g unbleached white bread flour (about 2 ½ c)
75 g whole wheat bread flour (about ½ c)
1 Tbsp olive oil (from the olive jar)
½ c oil-packed black olives, pitted and coarsely chopped (quartered)
2 Tbsp fresh rosemary, chopped
1/2 tsp fresh cracked black pepper 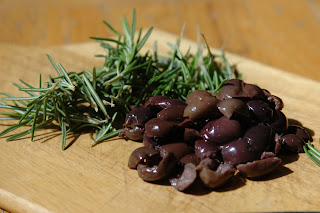 Combine water, flours, salt, sugar, oil, and yeast until a ball forms, and knead the dough for 5 minutes until soft and fully incorporated. Allow this dough to sit for 10-20 minutes (this is called “autolysis” or “autolyzing“, a process in which the moisture is absorbed by the flour and the gluten strands start to straighten out and connect, leaving the dough soft, flexible, and prepared to rise).
In the meantime, remove the pits from the black olives, strip the rosemary leaves off their stem, and coarsely chop them. Once the dough has rested, knead in the pepper, olives, and rosemary until combined. Place the dough in a greased, covered bowl in a warm area and allow it to rest until it has doubled in size (at least 1 hour). 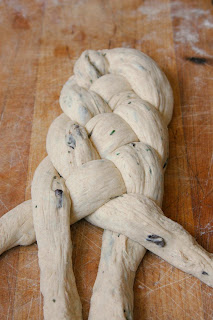 Note: I like to use the “dough” setting on my bread maker, as it self-autolyzes, maintains a nice warm temperature for the initial rise, and is much easier to clean than my Kitchenaid. If using a bread maker, add the olives, black pepper, and rosemary at the very end of the second kneading cycle (before it rises), or remove the dough from the machine after the final kneading cycle and incorporate the olives, etc by hand, returning the dough back to the machine to rise. That said, this bread is quite easy to make by hand in a bowl, or with a stand mixer equipped with a dough hook.
Once the dough has risen, turn it out onto a floured surface and punch/press the air out of it. Divide this dough into three even pieces, rolling each piece into a long, thin “snake” (roughly 1” diameter, 12“ long). Cover a baking sheet with parchment paper, and place your dough pieces onto it, connecting them at one end. Braid these pieces together into a loaf, finally attaching the ends at both sides and turning them under the loaf (in the pictures you can see that I did a more complicated 4-strand braid, which will give you a wider/shorter loaf than a standard 3-strand, but is very pretty. Directions for a 4-or-more-piece braid can be found online). 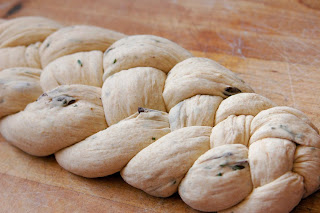 Sprinkle with coarse sea salt (I like to spray the loaf with a bit of olive oil before adding salt to help it stick and to keep the dough moist while rising). Again, allow the dough to rise until doubled (roughly 1 hour in a warm place – I put the baking sheet into the oven, turn it on for a minute, and then turn it off again).
Bake this bread in a 350 degree oven for around 30 minutes. The loaf should be golden-brown and sound hollow when rapped with a knuckle. For a crunchy crust, allow the bread to cool on an open-air rack. For a softer loaf, wrap the loaf in a dish towel while still warm. 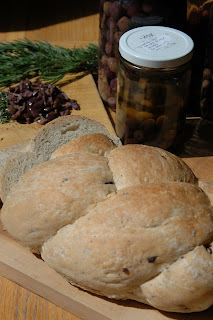