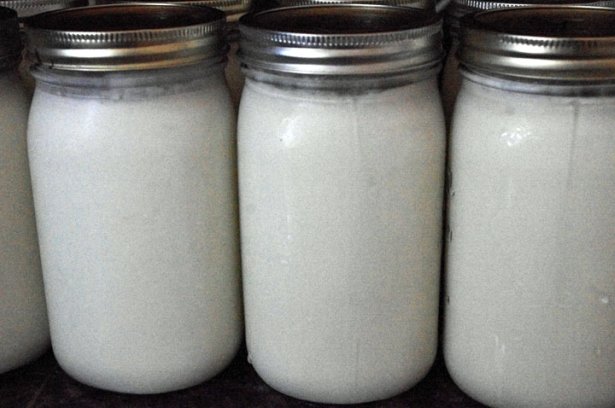 I remember when I was a kid my grandmother used to drink skim milk exclusively. We used to joke that it was watery and had a blue tinge. Skim milk was exactly that – milk that had suffered the injustice of having the cream skimmed off. But it wasn’t necessarily bad for you, it just wasn’t the tastiest thing in the world.

I don’t remember when skim milk turned into nonfat milk. The thin blue milk I remember my grandmother drinking was now white and no longer thin. Sometimes I would wonder why, but for the most part I just brushed it aside. I mean, everyone said that it was healthier for you, so it couldn’t really be bad. Right?

Enter Michael Pollan’s In Defense of Food. There was just one short passage in that book about nonfat dairy that piqued my interest. I continued to do research on nonfat milk and what I found was interesting and a bit disturbing. I then continued on and found that commercial milk actually scared the shit out of me. So let’s start with the problems behind nonfat milk.

First off, nonfat milk is missing the fat. “Duh, Rachel, we could have figured that out on our own,” you say. But what isn’t as obvious is that all the fat soluble vitamins that are in milk also go the way of the dodo when the fat is removed. The milk no longer has natural vitamins A, D, E or K. Vitamins A & D are usually put back in by the manufacturer but it’s been shown that fortification isn’t as healthy as the real deal because just adding the single components doesn’t take into account all the other enzymes and minerals that work symbiotically with the vitamin. Also you can’t absorb fat soluble vitamins without….fat!

So why is nonfat milk no longer blue? That’s because companies are putting in various additives that they actually don’t always have to include them on the label. The first additive you can find in nonfat milk is dry milk. Sometimes it will be labeled as “protein-fortified.” Some manufacturer’s do include it on the label, but some don’t. Dried milk is far from benign though. The process used to dry it creates oxidized cholesterol, which accelerates plaque build up in arteries.  Animal studies have found that even a small increase in oxidized cholesterol over 12 weeks doubled the plaque buildup compared to the control group. If your trying to eat heart-healthy, nonfat milk might be counter productive. Also, dry milk contains orotic acid which may have damaging effects to the liver.

Another additive sometimes used to make the blue liquid white is titanium oxide, a common ingredient in paint and sunscreens. It’s sometimes added to nonfat fluid milk but mostly used in other dairy products such as sour cream and cottage cheese.

But problems aren’t isolated to just nonfat milk. The qualities of straight-from-the-cow/goat/sheep-milk are never static. The amount of protein, carbohydrates and fat vary between breeds and even individual animals. It also varies depending on where in the lactation cycle a specific animal is at. So to standardize milk, manufacturers separate everything and then put it all back together at specific ratios. And then it’s homogenized which changes the structure of the milk and oxidizes fats. What used to be a healthful drink has now become another overly-processed food that no longer resembles the natural product.

There aren’t many alternatives right now but they are increasing. EatWild.com, RealTimeFarms.com and LocalHarvest.org are some sites that might be able to help you find local dairies. Straus Family Creamery offers pasteurized cream-top milk sold in old-timey glass bottles. The other option is to locate raw milk. Organic Pastures (not to be confused with Organic Valley) and Claravale (I’ve drank Claravale and never had an issue) are the only two legal raw dairies in California that I know of. They have very stringent procedures have third party testing of their milk several times a week to insure that it’s safe. In other states it may be easier or more difficult to find raw milk depending on the state’s raw milk laws.

Haven’t we learned from the margarine-is-better-than-butter fiasco? Trust the cow over the man.

11 thoughts on “Some Thoughts on Milk – A Lesson on Natural vs. Man Made”