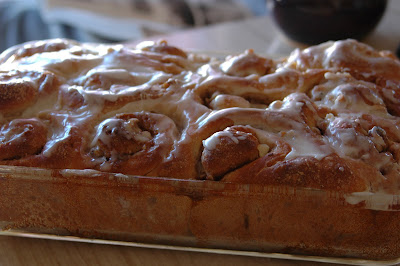 You know you want them.

Look at them. They’re perfect, right?
Right.
Oh man, if you could smell what the house smells like right now…well, actually, it’s probably better that you can’t (I hear drool is really bad for the keyboard). But let me just say that there are few smells in the world that equal that of a pan of freshly-baked sourdough cinnamon rolls. 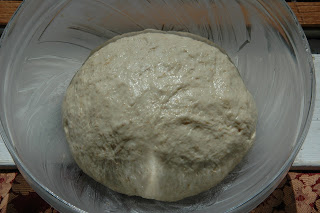 Plus, they’re made with actual sourdough starter and not yeast. Talk about the perfect food-bragging recipe. The little food critic/gourmand/snob in my head is kicking back smugly on this one.
Back story: I got my sourdough starter from my friend Alanna a little over a year ago, thinking I was going to learn to make sourdough bread and live happily ever after in a house full of perfect springy loaves. Instead I discovered that the art of baking with sourdough is… let’s just say there were a lot of failures and…well, eventually, there was my dejected resignation from the world of sourdough baking. To say anymore would just be depressing.
For a good 6 months or so I stuck with sourdough pancakes (recipe forthcoming), sourdough spelt/flax/whole wheat crackers (ditto), sourdough galette crusts…pretty much anything I could make with starter that didn’t actually require a healthy rise. 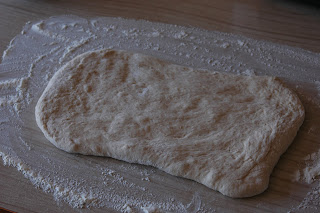 Basically, I wimped out. I used the sourdough start more as a flavoring than as an actual leavening agent. Then one day I happened upon basic directions for sourdough cinnamon rolls (while searching for that perfect waste-a-whole-day-baking kind of recipe) and decided to give it a go. I mean, somehow I had managed to keep the sourdough starter alive for long enough, I figured I ought to see if maybe my luck had changed with time; if maybe I could make something edible out of this very worthy (not to mention loyal) little ingredient.
This cinnamon roll recipe is the result of many test-batches (each one very tasty, but somehow not *quite* what I was hoping for). Many thanks to my roommate and boyfriend, who both stalwartly struggled through pan after pan of these rolls. Remarkably, they were very supportive of my continuing quest for cinnamon roll perfection. 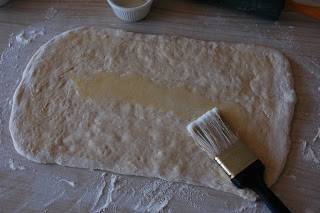 (what selfless, darling boys they are.)
So here you have it: my sourdough magnum opus. Sourdough cinnamon rolls that are neither too sour or too sweet. Wonderful for breakfast, dessert, or any time in-between. Rolls with a perfect springy center swirled with gooey cinnamon and nuts, all inside a delightfully crisp upper and lower crust. Drizzled with a light vanilla glaze, these sourdough cinnamon rolls will not fail to impress.
They will also, thanks be to all the gods, not fail to RISE.
Sourdough Cinnamon Rolls
for the dough:
1 1/2 c prepared sourdough start*, stirred down (roughly 3 c frothy)
2/3 c milk (I use nonfat, but anything is fine)
2 Tbsp sugar (I use evap. cane juice)
1 1/2 tsp vanilla extract
1 Tbsp butter, melted (vegetable oil is OK here too, but less tasty)
1 tsp salt
2-3 c unbleached white bread flour
1/2 tsp baking soda 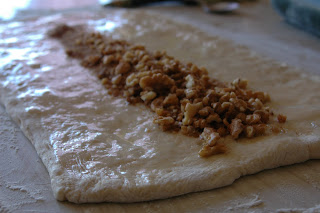 for the filling:
2 Tbsp melted butter
1/3 c coarse sugar (I like raw “turbinado” sugar for this)
1 1/2 tsp cinnamon
1/2 c chopped nuts (pecans or walnuts)
for the glaze:
1/4 c confectioner’s sugar (“powdered sugar”)
1 Tbsp milk
1/4 tsp vanilla extract
Starting the night before, stir some flour and water together (about 1 c each) with a bit of active sourdough starter* – the mixture should be roughly the consistency of thick pancake batter. Allow this to sit overnight to give the sourdough time to work its way through all of the mixture. In the morning, the mixture will have increased in volume and should appear puffy or frothy. Stir this back down (letting all the air back out of the mixture). 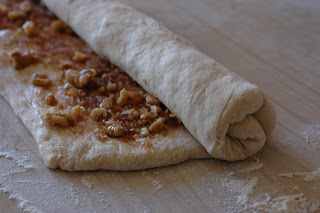 Measure out 1 1/2 cups of this stirred-down sourdough start into a large bowl. Add to it the milk, sugar, vanilla extract, melted butter, salt, and 2 c of flour. Stir/knead this together to make a VERY sticky dough. I find this easiest to accomplish with a large, sturdy rubber spatula and lots of elbow grease (or the dough hook in a stand mixer, if you’re into those sorts of things). Add up to 1 c more flour if the dough is not holding together in a ball.
note: everyone likes to keep their sourdough start at different levels of wet. Some like it more like a bread dough, others like a thin crepe batter. For this reason, I can’t tell you exactly how much flour YOU will need to make this recipe work with YOUR starter. Just remember the dough should be quite soft and sticky. Do not over-add flour or the rolls will be dense.
At this point the dough should hold together enough that it can be turned out onto a floured surface and kneaded by hand. Once the dough is homogeneous, sprinkle in the baking soda and make sure it is thoroughly incorporated. Roll the dough into a ball and place it in the bottom of a greased bowl. Cover the bowl with plastic wrap, and place it in a warm area to rise. This first rise should take 2-3 hours (the dough should double in size). 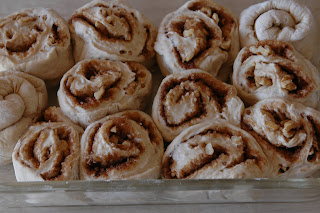 When the dough has completely risen, turn it back out onto a floured surface. Pressing all the air bubbles out as you go, roll the dough into a rectangle roughly 9″ x 18″.
Brush the rolled dough with the remaining 2 Tbsp of melted butter, and sprinkle the entire surface with coarse sugar, cinnamon, and chopped nuts (make sure to coat all 18″ of the length of the rectangle so the end pieces get filling too).
Starting on one of the long sides of the rectangle, roll the dough into a long log – don’t press too hard, or the nuts will cut through the dough. Slice rounds off of the log, and place them into a greased cake pan (the original recipe said it made 18 rolls, but they always seemed a little small. I like making about a dozen, and smooshing them into a 9″x13″ pyrex casserole dish that’s been rubbed with butter). 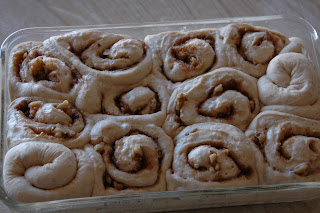 Yep, they have to rise AGAIN. It’ll take about 2 hours this time, and less if it’s a hot day and you keep them covered with plastic wrap to retain heat.
(In the meantime, mix together the powdered sugar, milk, and vanilla for the glaze. Just stir it all together until there are no lumps and set it aside.)
Once the rolls have doubled in size (they’ll expand to take up all the room in the pan, and puff up taller as well), pop them in the oven at 350 degrees for about 20 minutes, or until the tops begin to brown.
Once they’re done, remove them from the oven, but leave them in the baking pan. Pour the glaze over them while they’re hot. 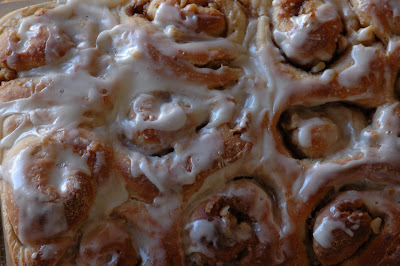 Serve ’em hot right out of the pan, or let them cool and enjoy them at room temperature. For added fun, you can make these with a cream cheese frosting – delicious! 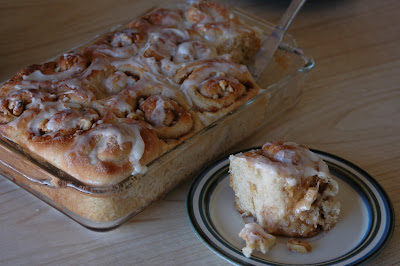 * a quick note on sourdough starters: a chef (sourdough culture) can be made easily from wild yeasts living in the air, and on the skins of certain fruits. A quick search on the internet will tell you a billion different ways to start your own sourdough culture, the easiest of which is to mix some flour and water together and let it sit out in the fresh air for a while, then cover it up and let it work its magic (don’t forget to feed it more flour and water every day). Within a few days, you should notice it has become frothy and has that characteristic sour smell. Hooray – you now have a starter!
You can also purchase starter “kits” online and at some natural food stores.
Many people have active cultures that they keep alive (or dormant in the refrigerator). That’s how I got mine. If you live around San Francisco, I will gladly give you a bit of it!