Have you ever been to a big box store or even just a hardware store and perused their garden center? Lord knows I have, even though I know better. They are a good place to start dabbling in growing plants, but definitely not a good option when you want to get serious. If you want to get serious you need to go to plant nurseries or start getting stuff online. Basically you need to buy your growing supplies from people that actually know what the hell they are doing. 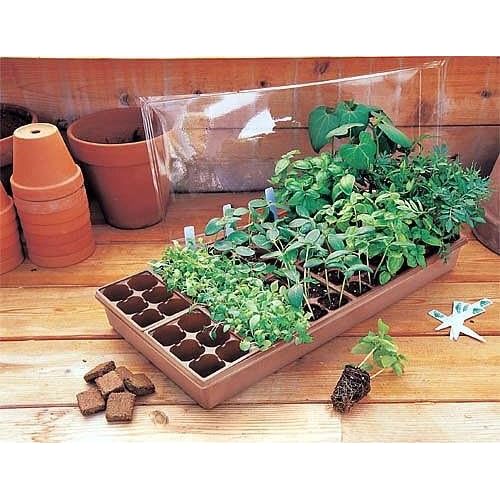 Here is the ubiquitous seed saving kit. It has a bottom tray, cell packs that go inside and then a clear cover that fits over the top. Now I use a mini greenhouse to start all my seedlings in, so there’s no need for me to use the top cover. Also, because it’s outside, I don’t need to have the bottom tray to contain the water. But that bottom tray isn’t harmless. the problem with it is that it holds the water. That’s the intended purpose of it afterall. But with seedlings, holding water isn’t really a good thing. You want that water to drain away from them. If the cells stay even partially submerged in water they’ll develop fungal problems (even when using sterile seed starting soil) which invariably lead to:

I have three ways to start seeds depending on what I’m planting. For squash, melons, cucumbers, corn, beans, and carrots I direct sow them. The squash and melons aren’t fans of having their roots messed with and the corns and beans are usually such large, strong seedlings I don’t much worry about them. Plus we plant so many of them we wouldn’t have the space to start them anywhere. The carrots are also best direct sown or you run the risk of growing forked roots.

For plants like peppers, tomatoes and eggplants I always start them in 4″ pots. That way they have the space to get large before I have to transplant them. I don’t set the 4″ pots in anything, they simply sit on the shelves of my greenhouse.

For smaller plants like lettuce, spinach, onions and chard (beets I also like to start this way) and also for peas (to get them nice a big before exposing them to slugs and snails), and brassicas, I start them in flats. The flats have holes in the bottoms so they can drain. I like the flats because I can plant a bunch of plants all together and then just tease them out when it’s time to plant. I almost always end up with extra plants which I then pass on to other people. Generally the cool season vegetables don’t get put in the greenhouse either. They get started on our workbench/outdoor bar. I have to come up with some creative ways to keep the turkeys out of them though.

I’ll admit that I’m bad at hardening off. A combination of being busy and being lazy I never get around to doing it. For the more frost tender plants I’ll just leave the greenhouse door open in increasing increments until I am sure that the last frost has come and gone. Since the cool season vegetable are started outside, I don’t really have to worry about them.

I always try to plant out when it’s either overcast or later in the day if it’s warmer so as not to completely shock the seedlings. Don’t try to overhandle the roots and only plant out the plants that have a nice large healthy root system. Also it’s key to water them well right after planting them out. I don’t use any B-1 or transplant starter because you don’t really need to. Don’t over water either. They will get wilty no matter how much water you give them. Just offer them some shade if you can and let them bounce back on their own.

2 thoughts on “Starting Seeds – How We Do It”