Bear with me while I’m still in the middle of processing this. It’s also quite long.

The Timeline of Events

Friday, September 25th, Tom was getting the patio cleaned up. We were planning a birthday barbecue the following afternoon for Junior’s 18th birthday. I got home from work at 1:55pm. I usually get out of work at noon on Fridays but I was working late because I had an out of town meeting to prepare for coming up on Monday. The patio was nearly spotless. It looked great. Tom was coming out of the tower from putting his tools away when I came in. Everything seemed normal.

We needed to make a Costco run for the barbecue. We left at 2pm. I was tired and in need of some caffeine so I asked Tom to stop by the Starbucks just down the street. We went in, got our drinks and left. 2:10pm we got a phone call from our neighbor. Tom missed the call but they left a voicemail. It was hard to make out what was said but we heard “house” and “fire.” Tom looked at me and said “I think he said (our other neighbor’s) house is on fire.” We raced home only to look over in shock at our house on fire. Well actually our tower was on fire. The whole front of it was on fire. The tower is maybe 6′ away from our house. Shit just got real.

Excuse my finger in the way

In a panic it seems that some things are clear and somethings you can lose your mind on. Tom fumbled with the keys to get the front door unlocked. Our dogs and cats were in the house and he needed to get them out. I immediately call 911.  Fortunately someone else has beat me to it. I run in, grab the gate keys and unlock the side gates because I can already hear the fire trucks rolling up. Tom can’t get the double gate unlocked so he kicks it open.

The hose on the back of the house had no pressure. A neighbor is in the front running the water to try and keep the roof of our house wet. I run to the garden hose. Lots of pressure but the hose attachment is hindering the distance it will throw. I didn’t even think to turn the stupid dial to the jet stream. Instead I just start hosing down the chicken run which is where I’m standing. I watch as our brand-new-not-insured-yet trailer catches fire. Shit! It’s filled with hay. Double shit! 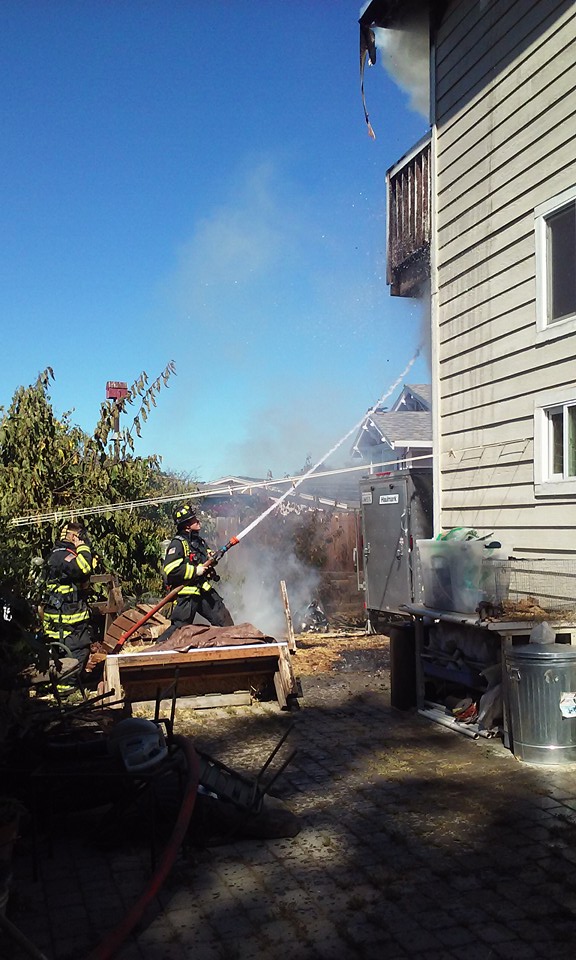 It seemed to happen so fast. Firefighters running through the open gates with hoses in tow. They had the fire out surprisingly fast. Then came the cutting open of the upper story walls and the pile of burnt items being thrown out of the new opening down onto the previously spotless patio. I look over at Tom “It’s time you cancel the party.” Tom starts calling guests and I call our insurance company. Once I get off the phone with them I start fielding phone calls from neighbors and friends. I make arrangements for a coworker to go to the Monday meeting instead.

The passenger side of the trailer is toasted. The tire is burned up, fender is destroyed and all the lights on that side have melted off. Tom had to hook it up to the pickup and drag it out of the way of the firefighters.

The fire department investigator shows up and we start talking to him about what happened, or didn’t happen. They determined the point of ignition but that’s about it. They couldn’t make a determination as to what caused it. Technically it is still under investigation.

What We Know and Don’t Know 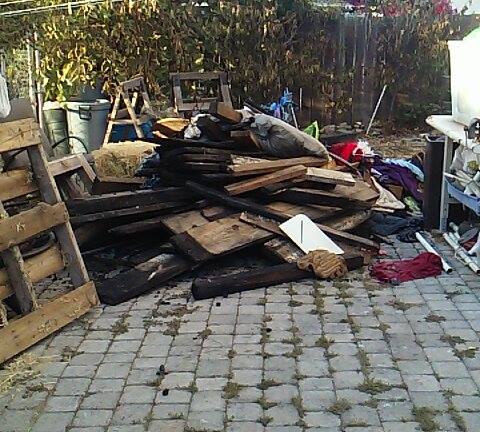 Some of the lumber we were holding onto.

The fire started at the bottom of our lumber pile. We kept a pile of lumber for projects which was all usable wood stacked neatly up on pavers so they weren’t in contact with the soil (don’t need to feed the termites). The fire did not involve any electrical wiring (that was all fine) and as far as we know, no fuel. No obvious source has been determined.

The investigator mentions that they suspect an arsonist in our area because they’ve had an abnormally large amount of fires lately. Actually a neighbor around the corner had their wood pile go up in flames just a few days ago. A woman in my gym class who lives not too far from us had a suspicious fence fire only an hour after our fire. The firefighters left our place to go put that one out and then she said they left her place to go fight another structure fire.

I went across the street to talk to some other neighbors about what was going on. They had a different story and a different possible explanation. One of them had been in the backyard. They heard some popping and looked up to see the power lines in front of our house sparking. Then they saw the smoke. The fire investigator didn’t seem too convinced about it though but will be following up with PG&E to see if they have any abnormalities recorded for those lines.

So for now we just don’t know what’s going on. Another investigator for our insurance company is flying up from SoCal on Tuesday to see if they can determine what happened.

Assessing the Damage and Our Feelings

The damage looks bad. Having had no experience with fire damage I honestly don’t know how bad it is. The firefighters said it was still structurally sound and moderately damaged. Looking in the holes that were opened up it looks like only a few structural beams have some fire damage to them. 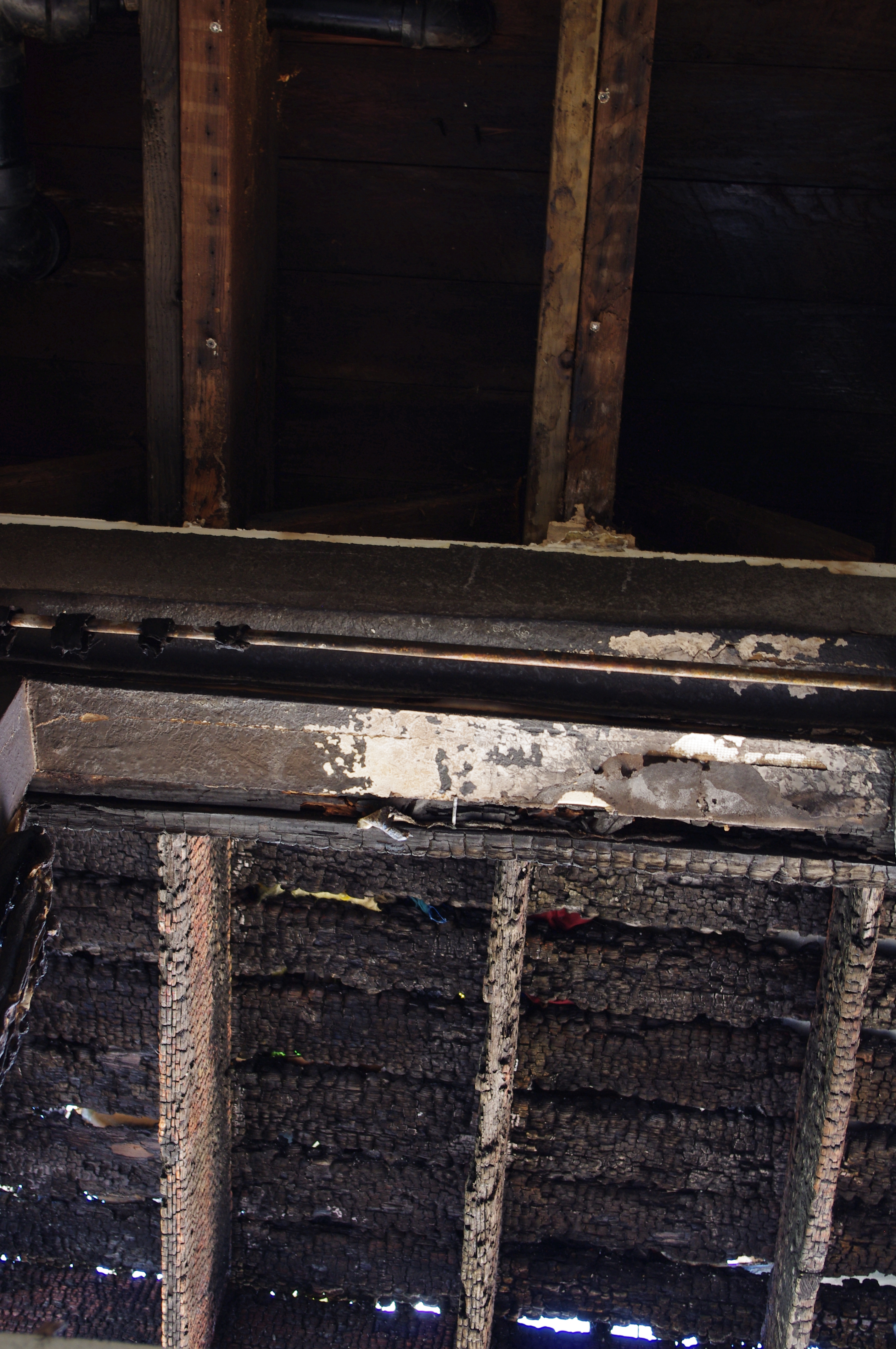 No stepping on that deck.

The most extensively damaged part of the building is the balcony. Let’s just call that one completely toasted. The photo above is looking through a broken window up at the floor joists that extend out to the deck. The burned ones are the deck itself. Thankfully they are not the primary structural floor joists inside the building. 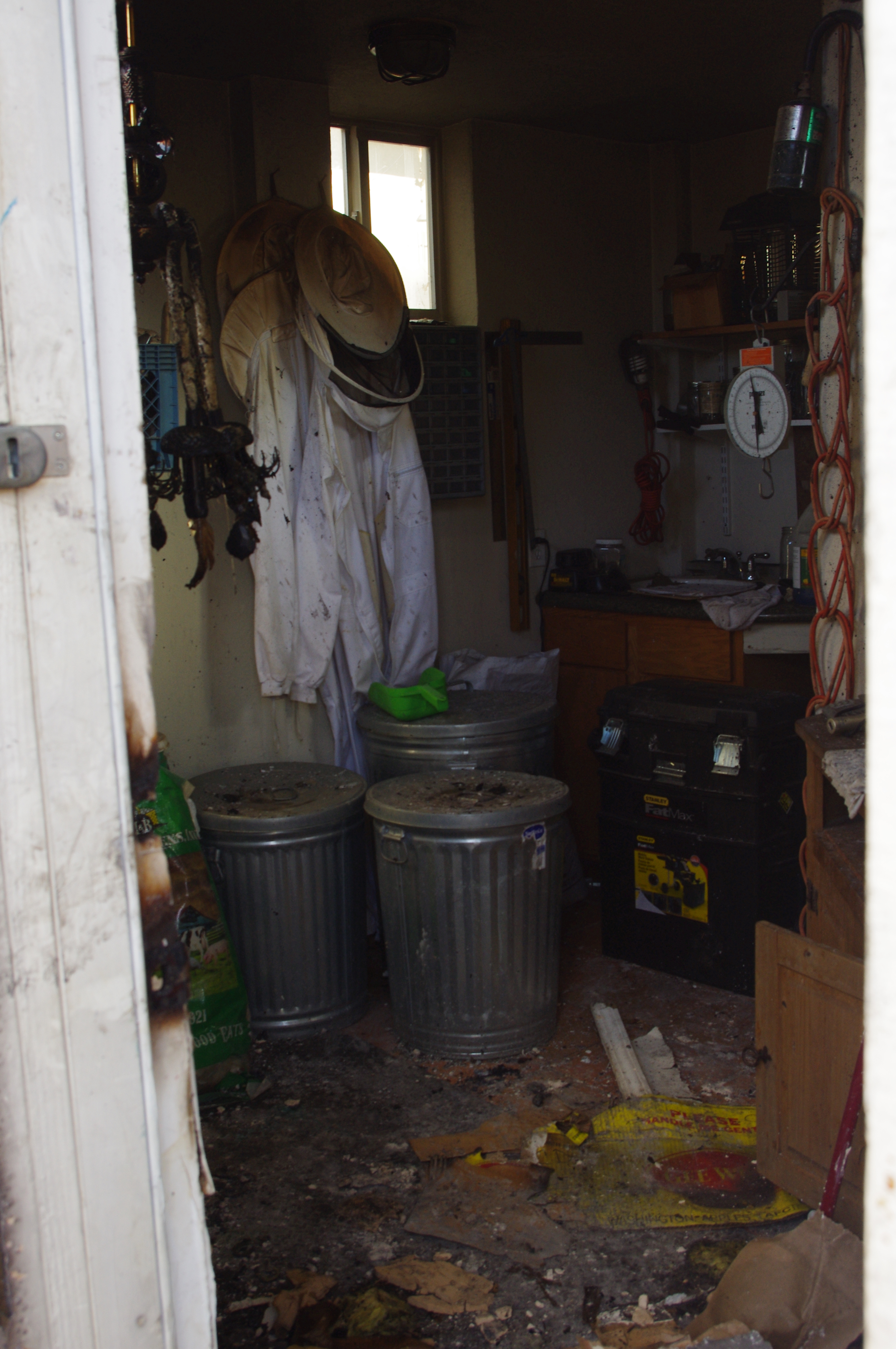 My milk room downstairs made it through surprisingly well (other than being a mess). There are some melted items like a now-permanently sealed bucket of wheat berries, the black chandelier from our wedding, the water bottle on my bike and a couple of my teat spray bottles. After this picture was taken the shelves on the back wall collapsed spilling all of the containers of miscellaneous hardware everywhere. Otherwise everything else seems relatively OK. The feed was covered so it didn’t get wet or smoked. The goat medication box is also fine. Our bee suits have a little smoke damage but I’m not worried about that. All of Tom’s power tools are fine as well. I feel so very lucky about this because this is where we kept all of our more valuable items.

The “loft” area also seems relatively untouched. Which is actually pretty awesome because it’s where we keep all of our Halloween decorations, including a lot of the ones we kept from our wedding. 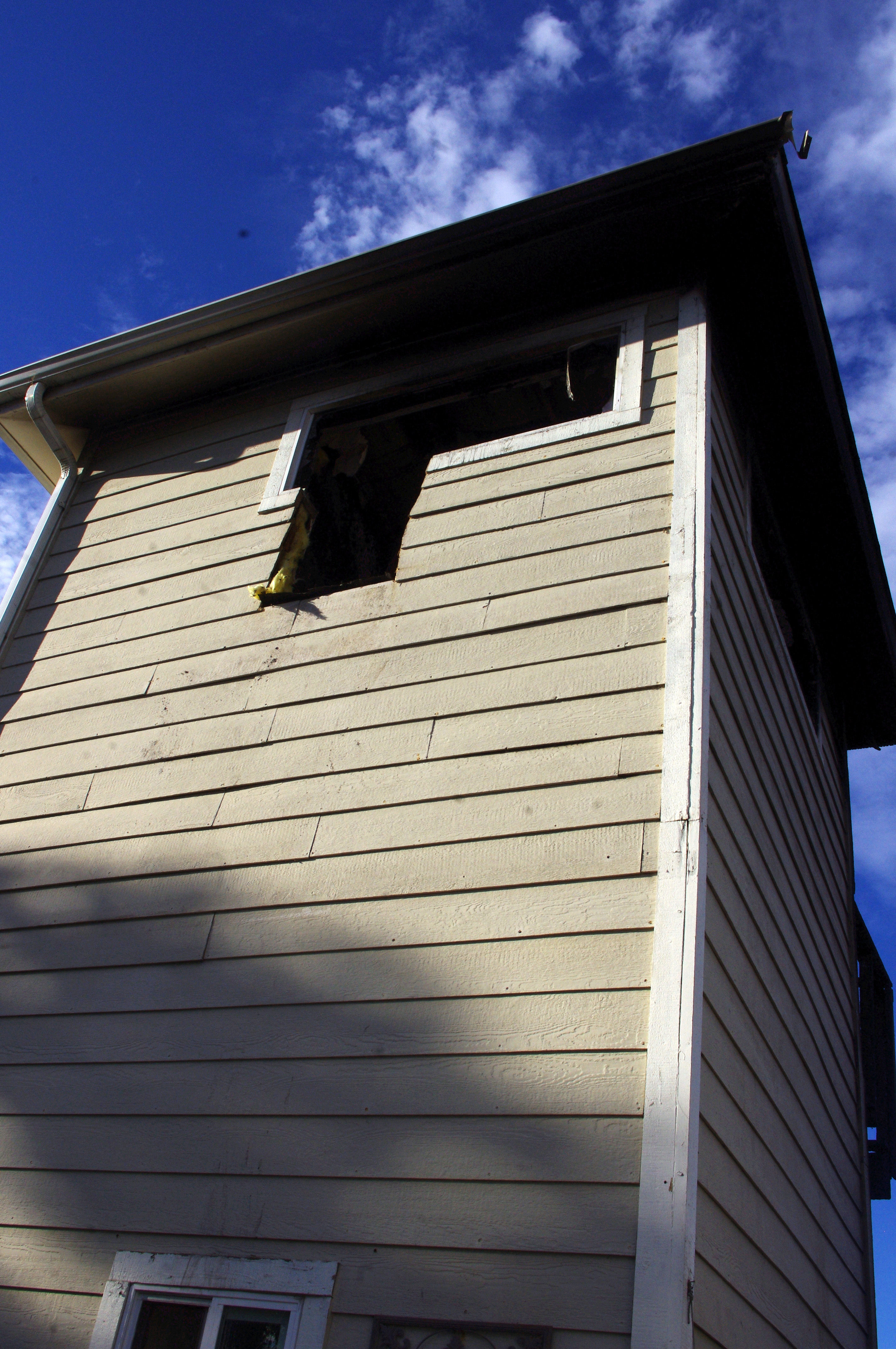 The top floor wasn’t quite so lucky. Well, except for the bathroom. Having the door kept closed to that seemed to help save what was in there. The upstairs is where we kept our camping gear, costumes, and extra clothing. Thankfully my wedding dress is in my bedroom closet. I’m OK with all of this. I think I’m having a harder time with the giant hole cut into the top floor wall because it’s the first thing I see when I’m coming home as a reminder of what happened. The tower rises up over our house and is a landmark viewed by most of the neighborhood. People have expressed their disappointment of now seeing it like this. That makes me sad. I completely understand that the hole needed to be made so everything could be pushed out of the tower as quickly as possible.

I’m starting to feel a bit overwhelmed by the utter destruction of everything. Mostly the “I’m going to have to clean all of this up” feeling and it seems really, REALLY daunting. There is broken glass everywhere. EVERYWHERE. Melted plastic has touched pretty much everything. We are stuck right now with the mess as we’ve been specifically directed to not touch anything unless we absolutely need it until our insurance company comes out to inspect the damage.

What I feel the most fortunate about is that no one was hurt, all of our animals were fine if not a bit stressed, and our house was OK other than a broken window. The stuff we lost is exactly that – just stuff. We’re not sure what we’re going to do with the tower. According to what our neighbors have told us in the past, the previous owners had planned to take it down but the city wouldn’t allow them because it was a historical structure. I’ll be visiting the building department to see what our options are. If we have to rebuild we will. Maybe make some improvements if we can. If we can tear down and build something more usable we may consider that depending on the cost.

Through the whole ordeal I was pretty much just numb. To a certain extent I still am. I was a little teary-eyed when we delivered a box of homemade cookies and a Thank You card to the firefighters and I’ve had a few instances of just wanting to cry but the tears never came. I actually think we’re doing a pretty good job staying positive.