I realized the other day after I wrote about the cats that there’s one major character here that I pretty much never talk about. I’m not sure why I never mention him. He’s had a huge impact on my life and has taught me a lot about animals. Today I’m going to put the spotlight on him.

He’s understated. He doesn’t get in much trouble and is fairly lazy. He doesn’t like to play fetch or tug-o-war, but would rather just snuggle with you on the couch. He’s got some working blood in him and attempts to herd the chickens but it ends up just being a silly game. His one downside is that he LOVES eggs and he knows where to get them. Oh, and turkey poo.

Riley. He’s our German Shepherd/Border Collie mix. We have no idea how old he is but we’ve had him for 7 years. He’s at least 9 years old now but you would never know it. I’m convinced that Squeek helps keep him young.

When Tom and I started looking for a dog we had visited the Sonoma County Animal Shelter’s website. There was Riley. I mentioned to Tom that he looked like my parents’ dog Milo. As cute as he was, we moved on, looking at other dogs. We finally adopted a 4 mo puppy named Buddy from the SPCA. He was a doll, but we quickly found out that he was dangerous. After a week with him he had bitten me 3 times and tried to attack 3 people. Paul was only 7 years old at the time and we couldn’t risk him getting bitten. My vet reassured me that we weren’t bad for returning him. He told us that he’d be 80+lbs and a HUGE liabilty when he got older. We decided to return him.

We weren’t giving up though. We wanted a dog. I was looking on petfinder.org and noticed that the mutt I had seen before was on the “URGENT” list. He was dump job and they had picked him up walking down a rural road near Geyserville. No one claimed him. The shelter had him for 3 months. Not a single person had come to look at him. They had kept him for so long (longer than any other animal) because he was such a good dog. The staff’s favorite, but because he was a large, older, black dog, he just didn’t stand out to potential adopters. The shelter could only give him one more week.

The story broke my heart, and because I was attracted to him from the beginning, I sent Tom to go get him, sight unseen. I told Tom he was bringing him home no matter what. Monday morning, March 21st, 2005 I called the shelter, faxed them the adoption papers and Tom picked him up. It was a big risk getting this dog that we had never met, but we went for it. Tom got to the shelter and walked by Riley 3 times not even noticing him. When he finally found him, Riley showed Tom just how sweet he was. Tom squatted down and Riley came to him and sat in front of him licking his chin. 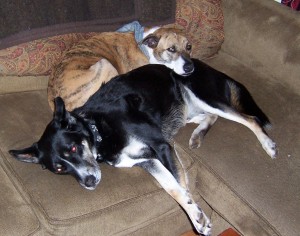 Riley was responsible for bringing Squeek into our home. After having him for a year we decided he should have a friend. I took him to half a dozen shelters and he met dozens of dogs. He was mostly “meh” with the vast majority of them. He was very picky with which dogs he was willing to play with. The first dog he really got along with was this silly little pitbull/heeler mix. She was so funny and they got along so well. Unfortunately she ended up being cat aggressive. After a couple more days of looking we found Squeek (at the time her name was Mia). From the second they met they were two peas in a pod.

2 thoughts on “The Life of Riley”