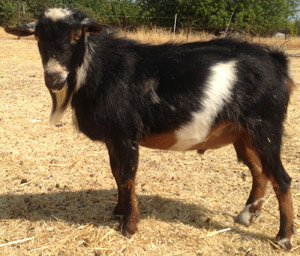 This past weekend Dog Island Kahlua N Cream and Dog Island CN MahoganyObsidian (aka “Maggie”) had a date with Castle Rock Graupel *B *S. Which means….Our kidding schedule is up. We only have these two breedings listed right now but hope to add a third soon (which will be some additional exciting news on it’s own) so stay tuned for that.

Castle Rock Farm has some incredible animals in their herd and it was just so difficult to choose what genetics I wanted to incorporate into my own foundation herd. Sometimes you get lucky and have a chance to incorporate a lot of them!

For our last breeding we were fortunate enough to be able to use Castle Rock Clark’s Nutcracker out of CH-MCH-PGCH Cloverdale YJ Blue Raven VEEE 90 by CRF Castle Rock Harvest Moon *S.  I’ve admired not only Raven, but Clark’s maternal half brother, CRF Castle Rock Guy Noir +B +S, who has sired many champion daughters. Clark’s sire, Harvest Moon is also producing very nice finished champions. Harvey’s dam, Castle Rock Once Ina Blue Moon earned a Top Ten award in the one-day milk test.  We hope that some of these amazing traits exhibit themselves in Kahlua and Maggie when they freshen.

This year we’re building upon those genetics with some more awesome ones! Maggie and Kahlua were bred to Castle Rock Graupel *B *S. Graupel is out of one of the highest appraising does at Castle Rock Farm – SGCH CRF Castle Rock Blizzard 1*M 3*D VEEE 91. Graupel’s sire, Castle Rock Cleveland Sage *S, is out of the other highest appraising doe, SGCH-ARMCH CRF Castle Rock Alum Root 3*D VEEE91. Not only are these does high appraising but they’ve also shown that they are very productive in the milk room. Blizzard has been in the Top 10 for the one day milk test more than once. Ali has also held a position in the Top 10 for the one day milk test as well.

Since we can’t keep too many goats we’ll just be keeping one doeling out of Kahlua but any other does from these two breedings will be available.