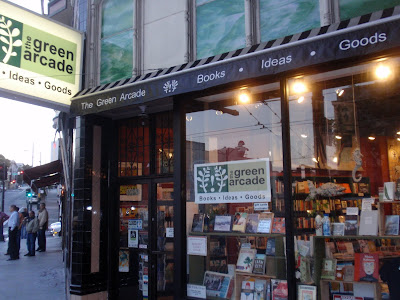 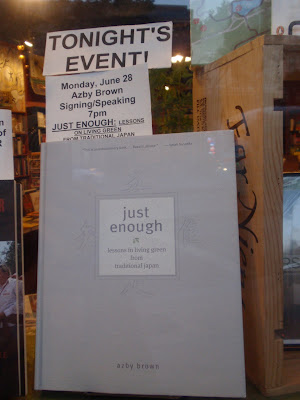 This week, I went to hear author Azby Brown discuss his latest book, Just Enough at The Green Arcade. I went in to the book reading thinking it was about modern Japan but actually found that it was about traditional Japan, specifically during the Edo Period.  This was an urban setting with over a million people in the city area. It wasn’t so much what they were doing that was interesting to me, but more of the mentality of the people, like there was no other way to do it.  I guess that goes hand in hand though.

The Edo Approach, as Brown referred to it, was one of sustainability.  Being an island nation and closed off, the city and culture was somewhat isolated.  Collecting and sharing information was common practice.  For example, tree censuses were taken; creating an inventory for ships, temples, etc.  When the wood was needed, that is when the tree would be cut.  If I am transcribing my notes correctly, there is a Shinto saying something like, people are just a small part of everything and knowing how to avoid excess is value.  (I believe the zen translation ” I know what just enough is” is on the cover of the book).  Brown described his initial experience of going to Japan to work with the last great Japanese wood worker.  He told the story of a piece of wood that was 1000 years old, turned into a piece of a temple, also many many years old.  The carpenter had explained to him that people criticize it taking 20 years to construct a building, but when it spans the time of thousands of years…

During the Edo period, buildings were not put together with nails or fasteners.  They used a the tongue in groove so that the entire building can be taken apart and the resources can move on to new uses:  ceder shingles become fuel, tiles become ornament, copper gutters are reused, iron is melted down, boards are reused, plaster is crushed and put back into the earth.  The entire building can be taken down and reused. The author stated that it is this behavioral wisdom or characteristic that made the system work.

This idea of time and buildings and resources is something that always occupied me   while in design school.  With all that we have now, why do we build the quickest, cheapest buildings that don’t last, tear down the old ones and put them in landfills?  I was devastated when my home town city decided to tear down an old brewery (one of the first in the country).  It was this beautiful brick building.   I went to the city and asked to please at least reuse the bricks (you can not quarry clay like that anymore), sell them, give them away, anything.  They refused!  It all went to a landfill.  I watched the whole process with total dismay. It is the most sustainable and sufficient to use what we have already built.  They didn’t even reuse the lot.  New growth is going up on the wetlands.

Reusing things during the Edo period created a material economy, part of the urban economy.  There were whole traditions of crockery repair, umbrella repair (to reuse or sell the wax paper to meat packers), and used clothes peddlers.  It was fashionable to get something used before buying something new and you didn’t throw things out.  There is no real waste.

During this period, they had public bath houses were you would get one bucket of hot water to wash with before getting into the public bathtub, they collected  human waste in buckets and it was sold to farmers, wood was only allowed to be collected when it fell to the ground. Rice, the main crop, was used entirely: hulls were composted, ash was fuel, straw was turned into general goods. (It was common that every household had a master weaver).

This idea of time:materials is absent in a lot of thinking today. We don’t look at where something came from or where it ends up.   Our water?  How often do you think about a dried up pen before chucking it in the garbage?  How long something should take to build and how long it should last?  My grandparents furniture and appliances were made to last.  I am lucky if I can afford a rug that makes it year without unraveling or a shelf that will withstand moving to another apartment. I cant even find a use for them when they do fall apart. Everything is disposable.  The sidewalks are always littered with cheap furniture and other things.  Even recycling is limited in what it can be made into.   (For more reading- Brown referenced the book “Cradle to Cradle” several times and the embodiment of energy in an item, the energy used to create a product and it’s total life cycle.)

I think it is interesting that during the Edo Period, they were so mindful with what they had even though they didn’t have to.   Was it foresight?  Is it because they were on an island?  San Francisco is trying to implement a Zero Waste Policy.  We have to compost and recycle.  Most of my large household purchases this year have been used.  Even my smaller ones, like books.  I didn’t have to, but I wanted to .

“Just Enough” is a very interesting look into another time period and how they treated the resources they had.    The illustrations are wonderful and worth a look at.  Check them out here.

Categories: Books, Thursday in the City

4 thoughts on “Thursday in the City- Just Enough”