I don’t really like to watch the news so much. It is always so negative. Why do we have to focus only on that? The good news (haha) is that we don’t have to! There are plenty of other sources to balance it out. I need inspiration. I want to see all the good stuff out there that people are working towards. Maybe I can use it at my home. Maybe I can use it to help someone else or a bunch of people. It doesn’t have to be something grand. The little things are great, too.
On TV:
A fun show to watch is VJIAM. Video journalists find noteworthy stories around the country to share. The viewer also gets an insider’s look at how to make a news video. One morning, I learned about The Sun Catcher’s Project brought by the featured VJ, Jeremy Briggs. Rita Riewerts had an idea to bring solar ovens to Africa to boil water and cook food. This helps the residents be more self sufficient. Having the means to boil water, they no longer have to walk for miles for clean water. They can supply it to themselves and each other. This is also something we could use in our backyard, at a picnic or camping trip. A kayaking expedition highlighted the solar ovens while filming a trip in Africa. The money raised from the movie will go to The Sun Catcher’s Project. I didn’t even know there was something like this out there let alone using the simple technology to help others. I think it is great!
Follow this link to watch the three minute video news report that I saw on VJAIM. You can also get a glimpse of the kayaking movie, Africa Revolutions Tour below with highlights of the solar ovens. 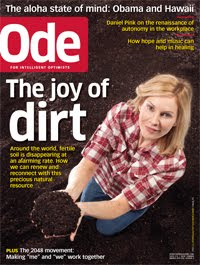 Photo via www.odemagazine.com
In Print:
I recently found an Ode Magazine left behind in a waiting room. I am so glad I did. What a great publication. They describe themselves as the online community for intelligent optimists. “Ode is a print and online publication about positive news, about the people and ideas that are changing our world for the better. Ode was founded in the spring of 1995 in Rotterdam, the Netherlands by Jurriaan Kamp and Helene de Puy. Kamp, a former editor and correspondent with the leading Dutch daily NRC Handelsblad, and de Puy wanted to create an alternative to mainstream publications, a magazine that was open to new inspirations and new visions from around the world. ” In 2004, they moved the English language publication to the Bay Area.
If the above cover looks interesting to you, The Joy of Dirt article can be found on the website. It reads that “soil is as essential a natural resource as air and water. Yet we’re running out of healthy, fertile dirt at an alarming rate. One man’s odyssey to retrace and reduce his soil footprint.”
Click this link for their online GOOD NEWS feature or other categories like People, Passion, Possibilities.
Sometimes it is just refreshing to see all the good out there.

2 thoughts on “Thursday in the City- Some Good News”